Airdrie, a Boat Lift , the Watchtower and a Little Rant

Hello to you all and Hello March. Two months of the year are gone already. That's kind of unbelievable , at least to me. I added 5 updates in January, 6 in February, so I'm shooting for 7 this month. Here's the first.

Today's first card is from Germany. It's a look at the old and new boat lift at Niederfinow. It is the oldest lift in Germany. It lies on the Oder-Havel Canal near Niederfinow in Brandenburg. The lift overcomes a difference in elevation of 36 metres. 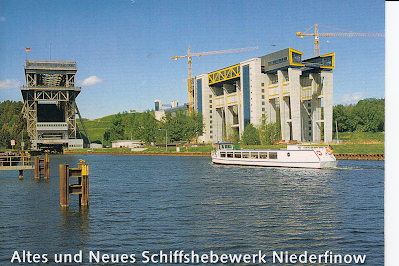 Michael used a stamp from 2020 on his card. It commemorates the 100th Anniversary of the Birth of German footballer Fritz Walter.

My 2nd card is a local card, sent from and sent to Airdrie, where I'm located. The small city of Airdrie celebrated it's hundredth year back in 2009. This card was produced to celebrate that milestone. The picture on the card shows Frank, Fred and Lafe Van Sickle. They were locals and had just struck water on their land. Good enough reason for a handstand, I guess. 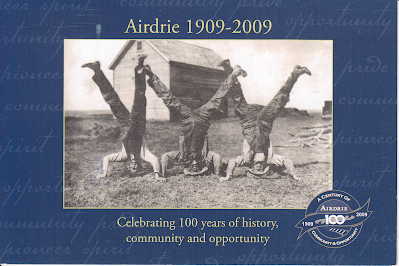 This one arrived with a couple of stamps from a few years back. On the left , from 2006, is 1 of 4 in an Endangered Species set. It shows the Blue Racer snake. On the right, from 2009, is 1 of 2 showing the paintings of Jack Bush. They were in a Art Canada set.

Next up is a card from Birmingham, Alabama, USA. The card doesn't depict Birmingham or area, but in fact The Watchtower, Grand Canyon National Park. The tower provides a sweeping panorama of the Grand Canyon. Desert View Watchtower is a 70 foot high stone building located on the South Rim of the canyon. It opened in 1932. My Lovely Teena and I had the pleasure of visiting here a couple of years ago. 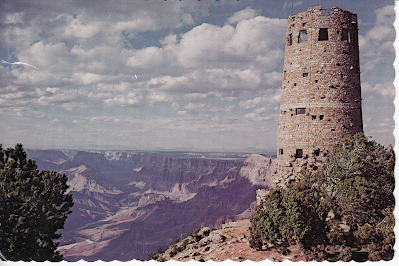 Lindsey used 3 stamps here. On the left, from 2020, 1 of 5 in the Enjoy the Great Outdoors set. In the middle, from 2017,  the Dorothy Height Black Heritage stamp, On the right the Additional Ounce Rate stamp from 2017.

That is my update for this time. I was going to add another card or two, but I'll save them for next time. Thanks for today's cards go out to Michael, Lindsay and Mr Anonymous.

Don't forget now - mask up, keep your distance and wash your hands.

Now I want to use the rest of my time here today to do a little rant. About 2 weeks ago I mailed out a bunch of postcards. I know some have arrived at their destinations and others may be arriving soon. That's all well and good. When I handed them in at the local postal outlet, I fully expected them all to receive a fairly nice and clear postmark / cancellation. Not. Some received nothing, some received a vague computer cancel and others received the proverbial PEN cancel from The Stamp Defacer . To say I'm disappointed would be an under statement , how about infuriated. If I had him or her by the pen, I'd break it in two. I specifically sent these cards with new issues stamps and what happens - some yahoo runs amok with a pen  , or does nothing with the stamps at all. Neither is acceptable . If they can't do their job at the post office, there's lots of people out there with no work who will jump at the chance. To any of you out there who are stamp collectors or just like a nice cancelled postcard, I am sorry. I guess we don't live in a perfect world.

So such as it is, that ends my update for this time.

Posted by Gem from Airdrie at 8:41 AM