Tuvalu, New Country # 234, and other goodies, including Liberia mail

I guess it's time I get back to this blog. I have been watching so much of the Vancouver 2010 Winter Games, that there just hasn't been much time for blogging. I also had the great pleasure of attending birthday parties for two of my grandsons during the past week. So blogging kind of got put on the back burner. Hopefully I can make up for the lack of updates with a good report today. I received a number of postcards, including one from a new country in my collection, #234. I also received a cover from Macedonia and a cover from Monrovia, Liberia.

So, let's start with the new country. Tuvalu-pretty good eh ? I have been trying for a Tuvalu postcard for over three years now and it's finally happened, thanks to Amy. Tuvalu is a Polynesian island nation located in the Pacific Ocean , midway between Hawaii and Australia. Formerly known as Ellice Islands, its neighbours are Kiribati, Samoa and Fiji. With a 2009 population estimate of 12,373 it is the third least-populated sovereign state in the world. Tuvalu is also the fourth smallest country in the world with just 26 square kilometres.
I promised myself that whenever I received a postcard from Tuvalu, that I would highlight Tuvalu's biggest problem. It's not enough that Tuvalu has almost no natural resources, very few jobs and it's main income is from foreign aid, it is also threatened by global warming. The highest elevation on Tuvalu is 4.5 metres above sea level, which gives it the second-lowest maximum elevation of any country after the Maldives. Because of this low elevation, the nation may be greatly threatened by any future sea level rise. At the Copenhagen Climate Change Conference in December 2009, Tuvalu's chief negotiator stated "Tuvalu is one of the most vulnerable countries in the world to climate change ".
Tuvalu also doesn't see many tourists, only about a hundred a year visit. Which leads me to believe that is one reason why postcards from Tuvalu are not that easy to come by.

My card shows a reproduction of a Tuvalu stamp issued in 1988. 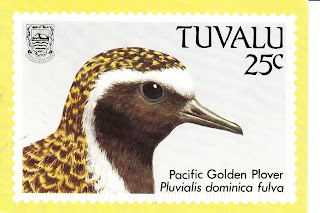 It was one of a set of 16 bird stamps issued . The Pacific Golden Plover is shown on my card. The stamp used is from a 2006 set of 12 definitives featuring shells and corals. 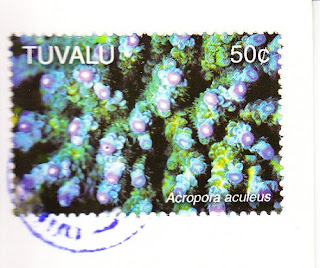 Amy who sent the card, is from Taiwan and was a Youth Ambassador of Taiwan last year. She went to Tuvalu for a cultural exchange program with a Tuvaluan high school student. She returned again this year simply because she missed living in such a beautiful paradise along with the Tuvaluan students . Thanks very much Amy.

Now with Tuvalu checked off, I get to concentrate on Nauru, Wallis & Futuna , Penrhyn Island and Tokelau Island. It's still not getting any easier, is it ?

Another card I received is from Germany. It actually shows a KLM aircraft landing ( I believe) at Schiphol Airport in Amsterdam. 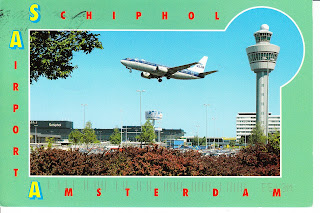 The next card is from Barcelona, Spain. It is from Postcrosser Gabrielle. It shows Park Guell in Barcelona. 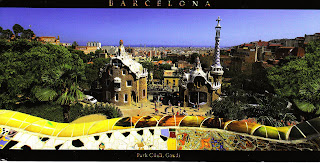 The park was designed by Antoni Gaudi , an architect of the Moderist Style. Gabrielle used a rather large stamp from 2009. 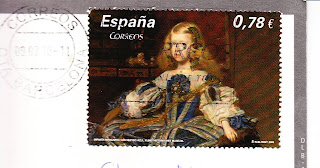 It is 1 of 2 values in a souvenir sheet featuring paintings of Margarita Teresa of Spain. The stamps are a joint issue with Austria.

That's it for postcards for today, but I still have a few items left. First is a commemorative cover celebrating 60 years of The Union of Philatelists of Macedonia. 1950-2010 . 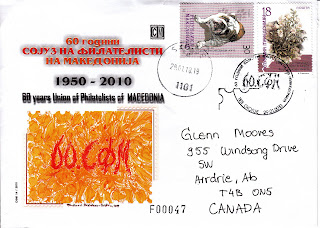 Ana of the blog My World of Postcards sent this cover which contained a limited edition ( only 300 issued ) flyer featuring flower paintings on stamps , by Zivko A. Popovski-Cvetin. The flyer was issued by the Union of Philatelists of Macedonia. Thanks very much, Ana. On the cover, you can see two stamps. The one on the left is from 2008 , and shows what I think is a bulldog. The other stamp from 1999 is 1 of a set of 4 issued with flowers and stamps. Bear with me , while I digress a little. Bulldogs and the bulldog stamp always reminds me of the Jim Stafford song Your Bulldog Drinks Champagne. It's a great tune, just one of many by Jim Stafford.

Now my final entry for today is a cover and the postcard that was inside. Even though I said earlier there were no more postcards, I want to show this one. But first the cover. 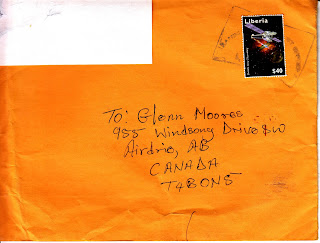 It is postmarked and stamped from Monrovia, Liberia. 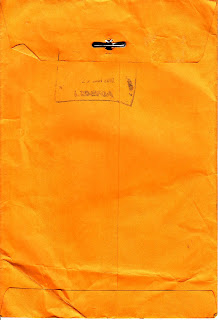 I guess this dispels the thinking or rumor that there is no working postal system in Liberia. I have read this and have even been told this by a Canadian diplomat serving in Liberia. I have tried for a number of years for a stamped postcard from Liberia , and while I still haven't achieved it totally , I feel I am very close. I have received a postcard from Liberia, it just arrived in an envelope. I will keep trying though.
The postcard is a multiview of 6 pictures actually taken by the sender of the card, Elma. 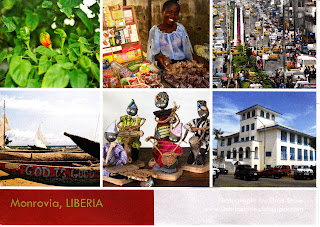 I like the crowded street scene , top right and the God Is Good on the canoe, lower left. Sounds like a good name for a canoe. Elma used a really nice stamp from 2008 on the cover. It is 1 of 6 in a mini sheet issued for 60 years of space exploration and satellites. It shows the Chandra X-ray Observatory. Thanks Elma.

That's all for this time. Now back to The Olympics. Canada's women's hockey team is playing Finland in an hour or so. I'm fairly confident of a win here, unlike the huge fiasco last night, with our men's team losing to the USA. Our guys weren't even in the game. It just makes for a longer road to Gold, I guess. Take care.
Posted by Gem from Airdrie at 12:56 PM 2 comments:

Finally I can add another new country to my postcard collection. Turks & Caicos , it is number 233.
They are coming quite slow lately, I seem to be averaging just 1 per month. But I guess that is better than zero per month. Before I get to the good stuff, I have a couple of other postcards to show. First up is a card from Netherlands. I'm not really sure what the card is about , 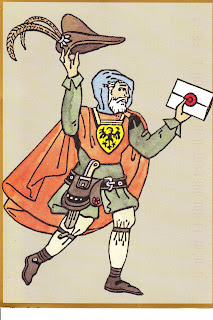 other than some guy is dressed up in a fancy suit. A Postcrosser named Anita sent the card along. She used a 2009 stamp which I believe came from a mini-sheet of 6. 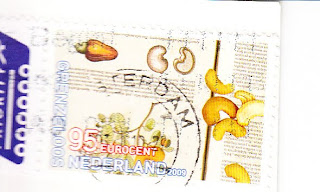 The next card is from Taiwan, R.O.C. It is actually a home made card featuring a bunch of pictures taken by the sender. 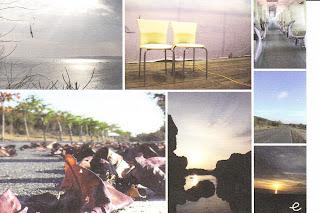 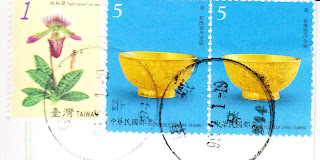 Now on to the good stuff mentioned above. The Turks & Caicos Islands is an British Overseas Territory consisting of two groups of islands, the Caicos Islands and the Turks Islands. With a population of 36,000 they are located 575 miles southeast of Miami and 39 miles southeast of the Bahamas. It is said the islands have one of the largest coral reefs in the world and is home to the Best Beach in the World. The postcard shows Grace Beach , 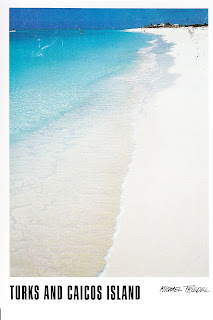 which is 8 km long, I'm not sure if this is The Best Beach in the World, but it sure looks pretty good to me. The card was posted in Providenciales, the only town on the island of the same name. It is also the location of the only conch farm in the world. The card is from Parker, Amanda, Zach and Xander. Parker is my son who went to Turks & Caicos for a vacation with his wonderful family. Thanks guys. The stamp is from a 2007 set of 13 definitives featuring shells. 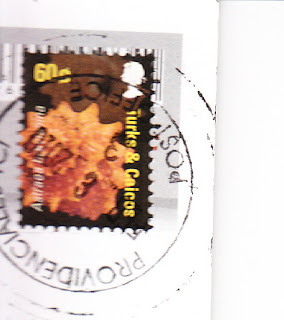 Just a short update this time. Take care, Enjoy The Winter Olympics and as always, your comments are welcome.
Posted by Gem from Airdrie at 10:04 PM No comments:

Well, I am back from vacation in Jamaica. The island where you'll hear Yeah Mon, No Problem many times a day. Had a great holiday , away from the snow and cold of Canada. Nice warm water, nice sandy beaches and lots and lots of Jamaican rum. Oh yes, we went in search of the local post office in Runaway Bay and purchased a fine selection of Jamaica stamps, both for my collection and also to send off a few postcards to a lucky few. No names, you'll just have to wait and see if you made the list. While away, I received seven postcards , all from Postcrossing. We'll have a look at four of them in a bit. Also while away, I received a very nice email from someone in Tuvalu offering a postcard swap. I had put out a few feelers before I left. I have been trying for a postcard from Tuvalu for over three years now so this email was quite a nice surprise. It will be interesting to see how long it takes mail to get from Tuvalu to Canada.

The first card for today comes from Tauranga, New Zealand. Lee sent the card , showing one of the geo-thermal pools in Waiotapu Thermal Park, about 30km south of Rotorua. 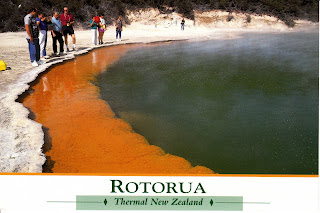 Lee says that the geo-thermal activity is facinating but that it smells like rotten eggs, giving Rotorua the nick name Rottenrua. Lee used 4 different stamps on the card, including 3 of a set of 10 Kiwi Stamps issued in 2009 and a Tolaga Bridge stamp from a set of 6 2009 definitives.

Now a card from Lublin, Poland. It is from Natalia and shows The Trinitarian Tower and The Archcathedral. 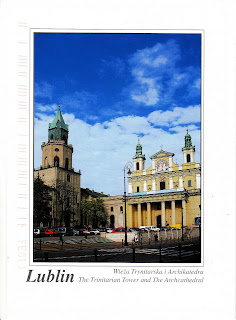 The tower now houses a museum of religious art. The Archcathedral was built by the Jesuits in the 16th century and was one of the first Baroque temples in Poland. The stamp on the right is from 2005 and is 1 of 2 definitives issued to show different architecture.

The stamp on the right is from 1999 and is 1 of 5 definitives issued showing the architecture of farms. 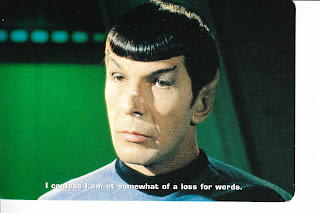 A rare moment indeed. The card is from Paul, who says in proper Vulcan style "Be Well and Prosper". I guess Live Long and Prosper wasn't available. Oh well. Interestingly, with Mr Spock being from the planet Vulcan, I am only an hour away from Vulcan, Alberta, The Official Star Trek Capital of Canada. Mr Spock , or at least the actor who played him, Leonard Nimoy will beam into Vulcan on April 23, 2010 for some sort of gig. I'm sure there will be lots of Trekkies in Vulcan that day.Paul used 2 copies of the 2007 Bighorn sheep stamp and a 2009 National Flag of Louisiana stamp from a set of 10 . 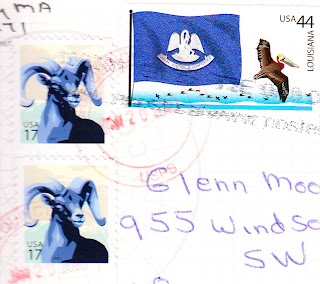 Finally , the last card for today comes from Germany. It shows the Alexander von Humboldt in full sail. 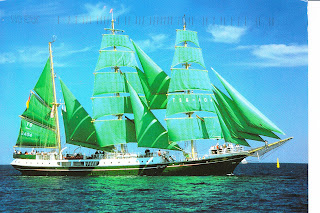 She was originally built in 1906 and then converted into a 3 masted baroque in 1988.

That's about it for today. I'm off to check for today's mail. It is good to be back and hope to be here again tomorrow.
Take care.
Posted by Gem from Airdrie at 11:33 AM No comments: