Hello again. I thought I'd be back here a little earlier but things didn't work out that way. Even though we moved in over 2 weeks ago, there still seems to be much to do. Since my last post, it has been hanging pictures time, setting up the deck time, and other things associated with the move. Postcards have had to take a time out. I think though , that's about to change. I anticipate I'll be here a little more often. At least I hope.

On to today's cards. Let's start with one from Sri Lanka. The UNESCO city of Polonnaruwa as featured on this card gives us a look at a vatadage. Circular in shape, they were commonly built of stone and brick. Polonnaruwa was added to the UNESCO World Heritage list in 1982 and comprises the ruins of the garden-city created by Parakamabahu in the 12th century. 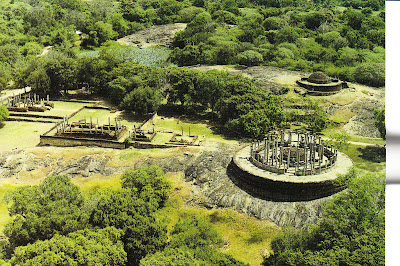 Ravindra used a really nice stamp on this one. It's a great topical stamp showing an Asian Elephant. It was issued this year and  arrived with a neat , clear cancellation. Always a bonus in my book. 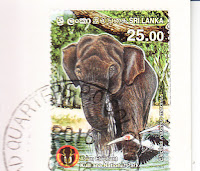 Who out there remembers The Prisoner - the great British series from 1967-68 staring Patrick McGoohan.? Only 17 episodes were made of life in The Village, which is really a bizarre prison. The citizens of The Village were only known by a number and McGoohan  who we see on the card was Number 6. Dominique sent this card from Portmeirion, North Wales , famous as the setting for "The Prisoner ". 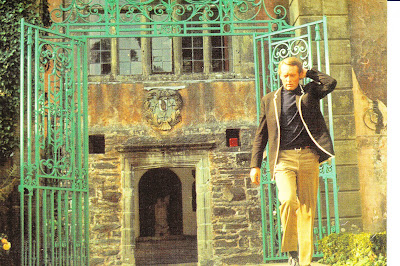 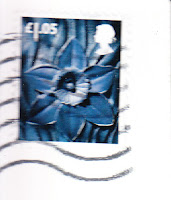 Next I have a new addition to my Airlines on Postcards collection. La Compagnie was founded in 2013 as Dreamjet. This French airline , based at Charles de Gaulle Airport , offers all business class flights from London and Paris to Newark, N.J. It operates just 2 Boeing 757-200 aircraft. It's first revenue flight as La Compagnie operated on 21 July 2014.

Jean Pierre used a couple of recent definitives along with a 2016 stamp issued for Euro 2016, to be held from June 10- July 10 of this year. The matches will be played in ten stadia in ten cities throughout France. 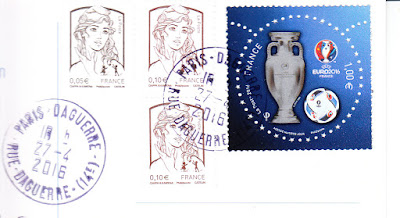 My 4th card for today is from Peniscola, a town on the Costa del Azahar, in Spain. It is a popular tourist destination and is often called the "Gibraltar of Valencia " or  "The City of the Sea ". This fortified seaport has a castle built by the Knights Templar between 1294 and 1307. 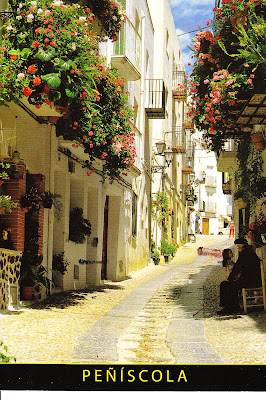 Ana used 3 fine stamps on this one. All were issued this year. On the left is a shaped ( on one side at least ) stamp commemorating the Space Shuttle Columbia. The other 2 large stamps are from a set of 4 in the theme of "Charming Villages ". An interesting feature of these stamps is that the reverse side of the stamps apparently resemble a mini postcard. Now I can't be sure of this , as I have never seen the reverse side. Maybe Ana  or someone else who has used these stamps will confirm this fact so we can all know.

Here's an aerial view of Brisbane city centre and Story Bridge. Brisbane , capital of Queensland is set on the Brisbane River.Story Bridge was constructed in 1940 to connect Fortitude Valley and Kangaroo Point. 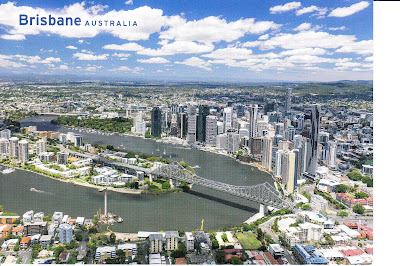 This card is from David who recently travelled Down Under and throughout the South Pacific. David used 3 stamps from 2016. On the left is 1 of 12 stamps issued to celebrate Tennis Legends. The one here celebrates Evonne Goolagong Cawley, a former No 1 female tennis player who won 14 Grand Slam titles. The other 2 stamps are from a set of 5 called Aussie Alphabet NQSVW. 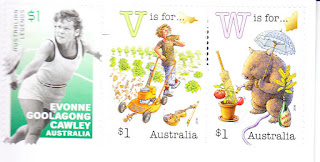 Now it's a card mailed from Phuket, Thailand. On it we see Phang-Nga Bay , famous for its tall limestone islets, such as James Bond Island . It was featured in the film "The Man With the Golden Gun ". 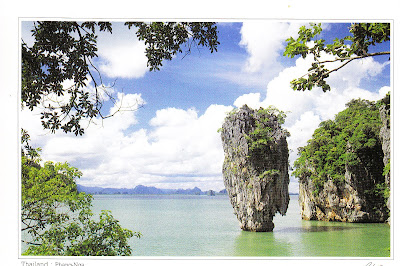 Khun Gordon used 3 stamps from a set of 8 celebrating this years Songkran Festival. This is the traditional Thai New Year's Day and is celebrated from 13 April to 15 April.

Now the last card for today, I promise. It arrived from Moscow and features Emilia Clarke in her character of Daenerys Targaryen of Game of Thrones. 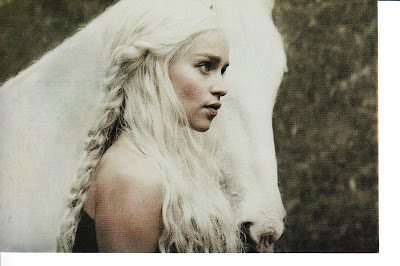 Anastasia used a couple of definitives from 2009 and a new 2015 stamp commemorating the 175 Anniversary of the world's first stamp , The Penny Black. 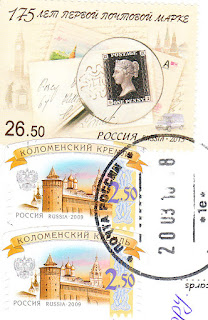 This is it - the end for today. It feels good to get another update completed , hopefully I'll be back before another week goes by. Thanks for cards this time go out to Ravindra, Dominique, Jean Pierre, Ana, David , Khun Gordon and Anastasia.  Take care.
Posted by Gem from Airdrie at 8:47 PM 1 comment:

Good day to you all . I hope someone is still tuning in here as it has been quite a while. I've moved back to Airdrie, Alberta, Canada. The new address is over there on the left. The move was a good one, everything went like clockwork and now we are again close to our family and friends. We are settled in and now I find it's time for postcards and blogging. All the heavy lifting is done so here I am.

I received a fair number of postcards the past month since my last update. The ones I share today are in no particular order of importance, or when they arrived. They are just random. So here goes.

Let's start with a card from Bulgaria. This one shows a Bulgarian Muslim bride from the Rhodope Mountains area of southern Bulgaria. Brides always have to make time for their make-up and I'm sure this lady was no exception. 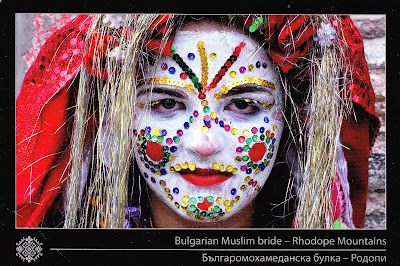 This card is from a private swap with Nikola, Anna and Bogdan of Sofia. They used a couple of stamps from 2015. On the left is 1 of 3 in a set featuring Old Clocks. The larger stamp in the center is from a souvenir sheet of 3 , each with a label as this one shows.

My second card for today arrived from Tyrol, the western Austrian state in the Alps that's known for its historic sites and ski resorts, including Kitzbuhel.  And , that's just what we see on this card, a number of winter scenes from Kitzbuhel. 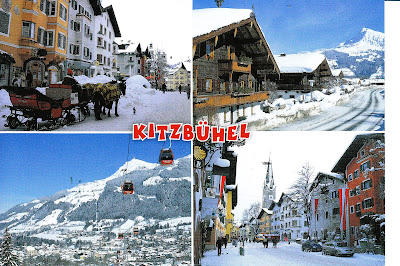 Meelis used 3 fine stamps on his card. On the top left is a stamp from 2016. I hope it scanned good as it's just about all white. It's title is Future and the quotation reads "The future has not yet been written. It is what we make it ". The stamp on the right was issued in 2012, a ATM vending machine stamp. It shows Grosseglockner, the highest mountain the the Alps east of the Brenner Pass. The other stamp, under those 2 was issued in 2015, celebrating The Bergkirche, a church in Eisenstadt built in the early 18th century. 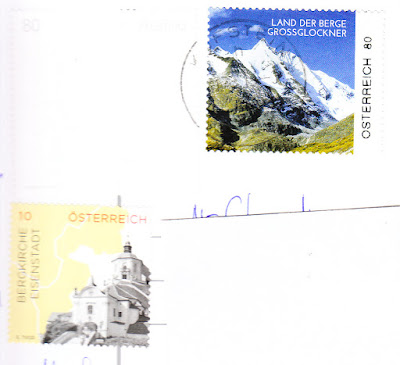 Sorry, looks like the stamp of The Future didn't scan well at all. I guess that's something to be worked on in the future, a better scanner .

This next card arrived from Genoa in northwest Italy. It displays an advertising for Turandot, an opera in three acts by Giacomo Puccini. It was uncompleted at the time of Puccini's death in 1924. It was completed by Franco Alfano in 1926. 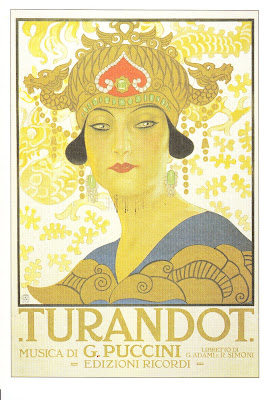 This card is the result of a swap with Carla. She used a nice Aviation themed stamp from 2015. Carla 's stamp shows an old biplane from 1938. It is from a set of 2. 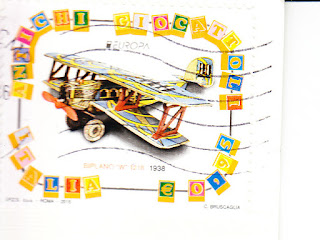 The Royal Sportsman Hotel is the subject of this next card. The 1862 built hotel is located at 131 High Street, Porthmadog, Wales, U.K. 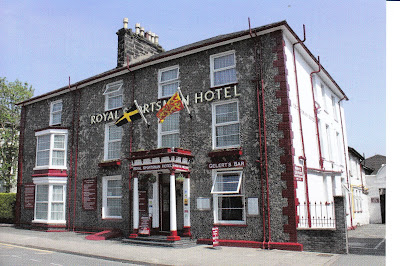 Dominique used 2 recent Machin definitives along with a 2016 Shakespeare stamp from a set of 10 , all of which show quotes from his works. This one is from Romeo and Juliet. 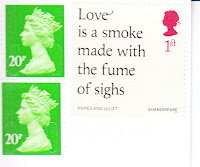 Asmik Grigorian , famous opera singer from Lithuania is shown on the next card. She is shown in in her role in G. Verdi's opera "Trubadour ". The card was issued by the Vilnius City Opera. Birute sent this card from Merkine, Lithuania, as another private swap. Interestingly, Merkine was located in northern Poland from 1920-1939. 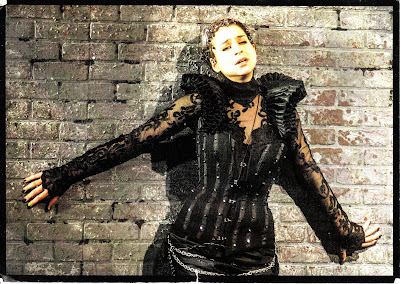 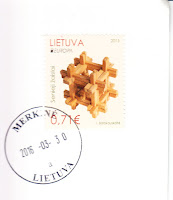 There you have it. My first update after my move back  is complete. Hopefully I still have a couple of readers out there. It feels good to get this one in the books. Thanks for cards go to Carla, Meelis, Nickola/Anna/Bogdan, Dominique and Birute. Take care, see you again soon.