Time for another postcard update. Today's cards are some of those that awaited me on my return from Newfoundland last week. They are from Germany, Mauritius, Saint Pierre and Miquelon, Canada and 2 from The U.S.A. Here we go.

First up is Germany. This photo by Ralf Oldenburg shows a Berlin manhole cover. When you look at it, it could actually be called a piece of art. 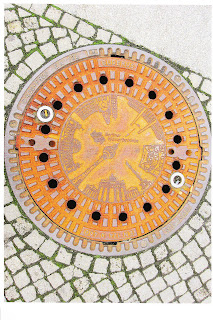 Many towns and cities showcase themselves on their manhole covers. The internet has many examples of manhole covers from all around the world. Last evening I was out for a walk around my neighbourhood of Airdrie, and after receiving this card, I looked down and actually saw the Airdrie manhole covers. The Postcrosser that sent me this card writes that Berlin has over 30 different manhole covers in use. I think I have found a new collecting theme- manhole covers. This is my first , but now I want more, many more.
Now for the stamps. On the left is a flower definitive and on the right is a 2011 stamp showing a Caspar David Friedrich painting.

My next card is from Mauritius, an island nation in the southwest Indian Ocean. Bruce from South Africa posted this card of the elusive Dodo. He was recently there for a short visit. The dodo was a flightless bird endemic to the island of Mauritius. It has been extinct since the mid-to-late 17th century. 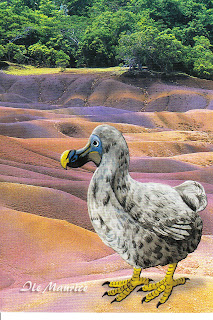 We often use a couple of phrases related to the dodo. The phrase "dead as a dodo" means undoubtedly and unquestionably dead, whilst the phrase "to go the way of the dodo" means to become extinct or obsolete, to fall out of common usage or practice, or to become a thing of the past. Bruce used a nice new 2011 stamp , 1 of 4 in a World Heritage issue. 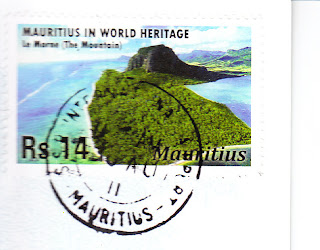 Card # 3 comes from Saint Pierre and Miquelon, 2 small French Islands off the south coast of the island of Newfoundland, which is off the east coast of Canada. The islands' status is that of an overseas collectivity within France. It is France's oldest remaining overseas territory. The card gives us a look at Pointe Aux Canons. 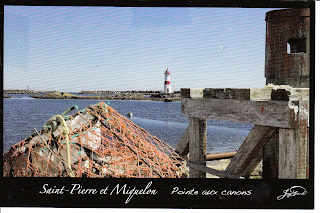 The Pointe aux Canons Battery is located just before the jetty to the lighthouse on the site of a much older fort that defended the Saint-Pierre & Miquelon islands during the British raids of 1690-1713.My brother Mel and his wife Ollie recently visited the island and sent this card to me. On it are 2 French definitives overprinted SPM and 2 stamps issued in 2010 , one issued for fishing and the other a bird issue.

I've often said in the past that St. Pierre stamps make a good collection and I rate them top of the line , along with French Polynesia for beauty.

Here now are 2 cards from the U.S. The first one is from Wichita , Kansas. It is entitled Post Rock. Fence posts made from rock. 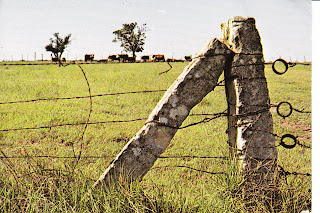 The card speaks of the resourcefulness of Kansans , using stone fence posts where trees are scarce. Melissa used 3 stamps, including the clock definitive, the Lunar New Year Forever stamp and a Love themed forever stamp. 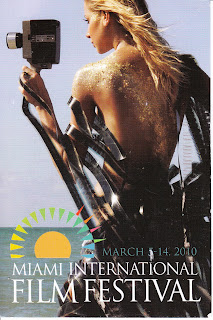 It's kind of timely getting this card at this time. The Calgary International Film Festival is currently happening, just 15 km to the south of Airdrie. Jeanine used 2 Forever stamps, another of the Love stamps and a ship stamp from a 2011 set of 4. 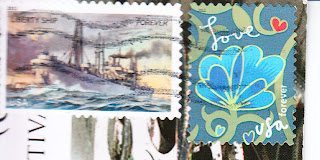 Finally, the last card for this time. It shows a lady in a room at the Drake Hotel in Toronto. A nice looking card, just something about it. The card says The Drake Hotel, A Hot Bed For Culture. 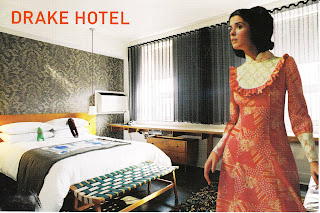 The Drake is a cultural destination for travelers of the mind, an architectural gem set amongst Toronto's vibrant Galleries, Lounges and Boutiques on Toronto's Eclectic Queen St. West. Travel & Leisure Magazine , in Jan 2006 , called The Drake "One of the 500 Best Hotels in the World " Thanks to Pam, a concierge at The Drake for this card. She used the Royal Wedding Day stamp from earlier this year. 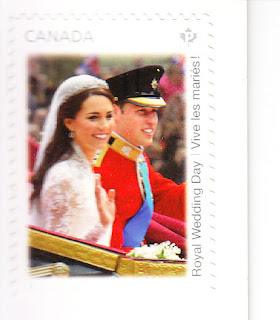 That's about it for this time. In summing up, I mentioned about that I have now started a collection of postcards showing manholes. I really don't know if there are many of them out there, but if you have one, feel free to send it along. I also have just started collecting cards of Post Offices. I have 4 of these so far. Same goes for these, if you have one, feel free. Swaps for manholes and post offices are certainly possible.

Posted by Gem from Airdrie at 12:23 PM No comments:

The Return of The Blog

Sounds like a new movie title to me, no, I guess that would be The Blob. Anyway, I'm back, and The Blog's back. I was away for a couple of weeks in Newfoundland. I bought a few postcards, mailed a few postcards, so if you feel lucky look in your mailbox. If you aren't one of the lucky ones this time, maybe next time. Moving along, my mailbox was quite full on my return, stuffed with 27 postcards. Some of these will be showing up here on the blog in the coming days. Today's blog will feature cards from Thailand, Finland, Pakistan, Taiwan and Poland.

First up is Thailand. The card shows a reproduction of a Thai classical painting of Loi Krathong. 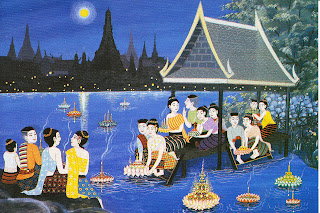 This is an annual festival celebrated ion Thailand. It takes place on the evening of the full moon of the 12th month of the Thai lunar calendar, usually November. During this night, Thais float their Krathong on a river, canal or lake. The festival is believed to originate in an ancient practice of paying respect to the spirit of the waters. Today it is simply a time to have fun. The stamp here is from a 2007 multi sheet issued for Tourism. 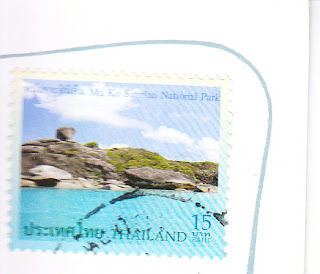 This next card comes from Finland. It is a reproduction of a poster from the 1950's, put out by the Finnish Railway Museum. 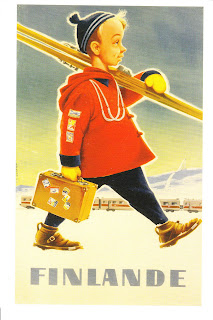 The young dude here looks to have just arrived by train to one of the local ski areas. The stamp was issued in 2007 and is 1 of 2 in a set featuring antiques. 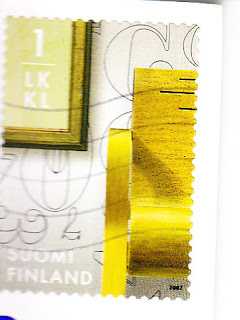 Card # 3 is from Pakistan. I haven't received many cards from this country. So to get this one is good.On it we can see a Hunza woman making bed sheets. 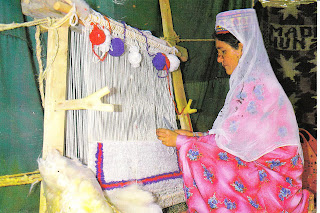 The stamps are from a set of 12 definitives issued in 1994 featuring Mohammed Ali Jinnah.

Next up is a black and white card from Taiwan. The picture , from 1988, is from a Jan Pang Hsu exhibit entitled Taiwan Retrospective Exhibition on Farming with Black and White. 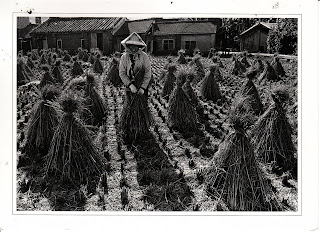 Ho-Nan , a Postcrosser in Taiwan sent this card along and used a number of different stamps as you can see.

Today's final card is from Poland. Asia who sent this card lives in Olkusz. 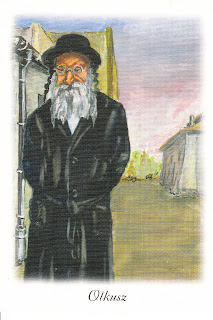 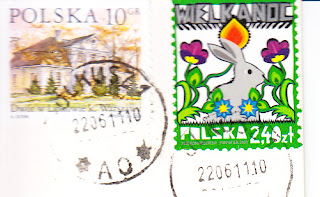 That's it for postcards today. Just a couple more items before closing.

First, I have a little 3 part cartoon for you. It's for all of us who send postcards or like stamps and often complain about postage costs. Here it is , enjoy. 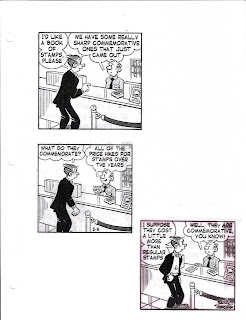 And, finally, a last call for entries to the contest that I wrote about in this blog back on August 26th. Check it out , it has a great prize . One last clue for you- as of this writing, card # 1982 has arrived.
Posted by Gem from Airdrie at 10:46 AM 4 comments:

GemsWorldPostcards will be on a short hiatus. Actually , maybe not that short.

The next real update will not be before Sept 21 . Of course, the good news in this

is , my mailbox should be stuffed with postcards, so will have lots of stuff to put on the

blog. Now before I go , how about a few more entries for my contest as I mentioned in

my blog of Friday, August 26th. The prize is a great one . Check it out.