More of the Cards That Arrived While I Was Gone

Let's have a go at a few more of the cards that I found in my mailbox when I returned.
First is a card from Oslo, Norway - not a country that I have a lot of cards from. This one is just the fifteenth such card. On it we can see the Oslo Opera House looking like it's rising from the water.It is the home of the National Norwegian Opera and Ballet. It opened on April 12, 2008. Interestingly you can walk from the water's edge right up on the opera house roof. 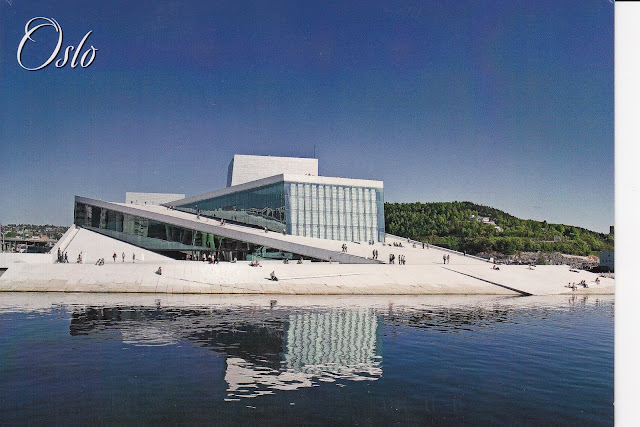 This is a card from Ana who was visiting Oslo. She also had a Postcrosser from Oslo sign this card - Cathrine or Norway - Girl as she calls herself.

Just an after thought - Norway issued a stamp featuring the Opera House , in 2008.


Don't forget to check out Ana's blog. It's called "  My World of Postcards and Travels " .


My next card is from Albania and it shows the Ottoman Clocktower located in the center of Kavaja, a town in the central part of the country. The citizens of this town made an outstanding contribution in the housing and sheltering of Jewish refugees during World War II. 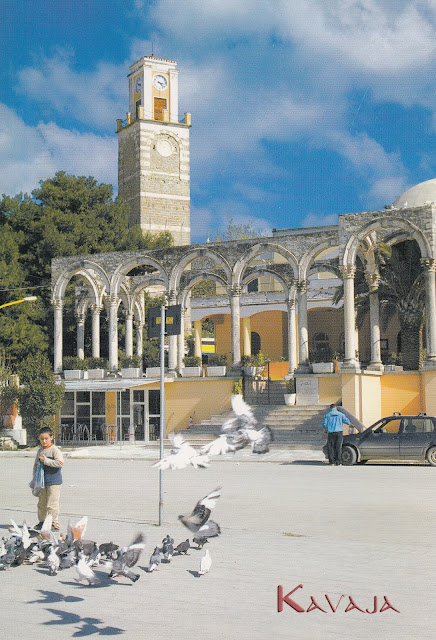 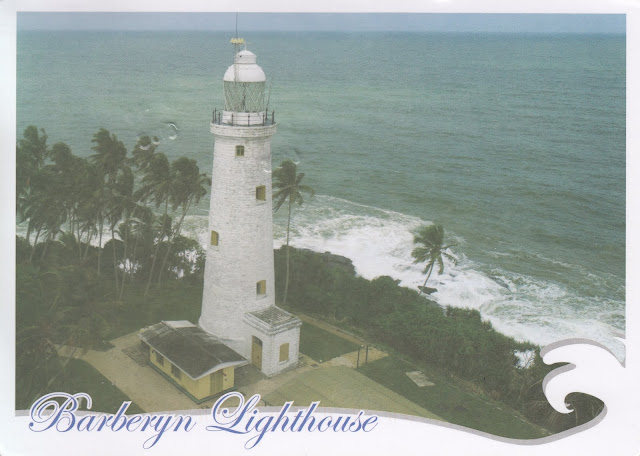 Ravindra used a great selection of stamps on this card. At top left we have a stamp celebrating Ho Chi Minh of Viet Nam. It was issued in 2014. At bottom left, from 2014 , a stamp celebrating Ray Wijewardene. The middle stamp was issued in 2013 marking the 30th Anniversary of the Death of Dharmadasa Walpola. The top right stamp is from 2015. It is 1 of 2 celebrating the Visit of Pope Francis to Sri Lanka. The bottom right stamp was issued for World Post Day 2012. It is 1 of 4 showing Flowers of Sri Lanka. 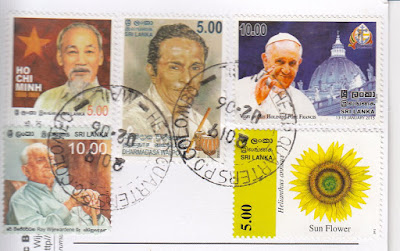 Hope everyone is hanging in , I just have 3 more cards for this time. But before I get to them, I just want to mention Ravindra's blog, it's called " Lighthouses on Post Cards " . Check it out.

" Did you just move - you're spooking me out here ? " I can only imagine that's what Chumlee ( on the right ) might be thinking. Chumlee is one of the stars of the Reality TV show called Pawn Stars. Chumlee and his friend are standing in the real pawnshop called Gold & Silver Pawn in Las Vegas operated by the stars of the TV show. I visited the shop back in October of last year. 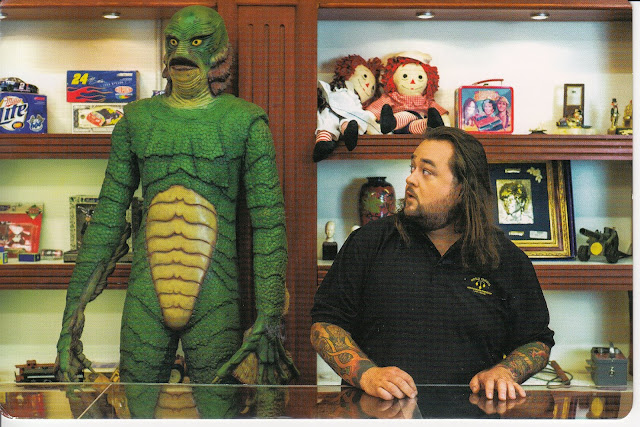 Used on this card are 3 Wonder Woman stamps from 2016. 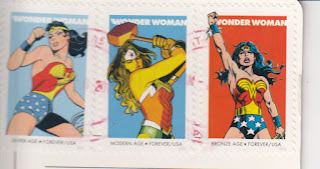 Time now for an old card from Germany. Two young ladies warming something on the heater. I'm not sure just what, maybe her shoe. 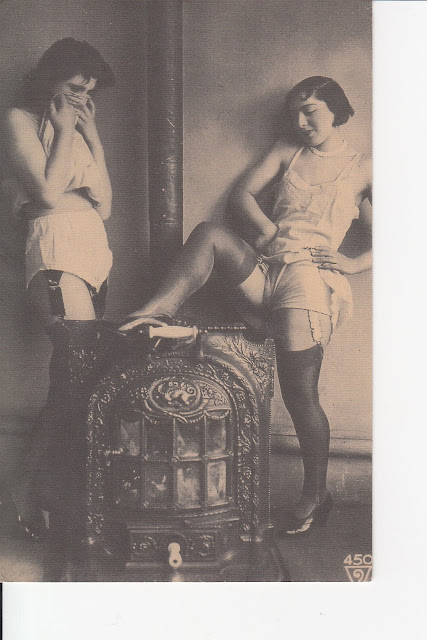 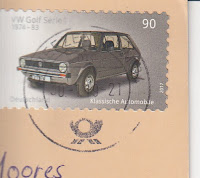 Here's the last card for today. It's a Map card from Minnesota, Land of the Sky Blue Water. There's more to it than that, though. It's from where it was actually mailed that's important. It is postmarked " Angle Inlet, MN. " Look on the map , at the very top - you see Lake of The Woods - that little piece that juts up, that's where Angle Inlet is located.
Angle Inlet is a census-designated place  and unincorporated community in Angle Township, Lake of the Woods County, Minnesota, United States. Its population was 60 as of the 2010 census. The community is part of the Northwest Angle, the only place in the contiguous United States north of the 49th parallel; it is the northernmost census-designated place in the contiguous United States. The French built Fort Saint Charles nearby in 1732.

Angle Inlet has the last one-room school in the state and a post office with a sign stating that it is the "Most Northerly P.O. in Contiguous U.S." To travel to Angle Inlet from other parts of Minnesota by road requires driving through Manitoba, Canada. The  area was designated as territory of the United States because negotiators of the initial Canada–US border misunderstood the geography of the area. So if you want to drive to Angle Inlet from anywhere in the U.S. you must leave the U.S, drive thru Canada and then re-enter the U.S. That means clearing Canada Customs and then clearing U.S. Customs, and the same going back. 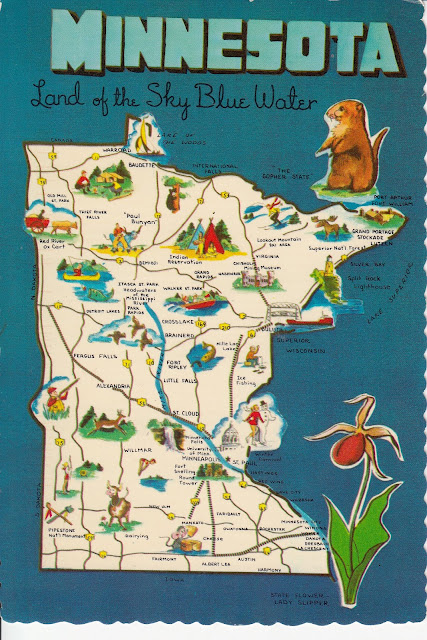 Three of 4 John Lennon stamps arrived on this card from the Postmaster at Angle Inlet. A nice , clear, circular cancel. The stamps were issued last year.

That's it , another one done. Thanks for today's cards go out to Ana, Indrit, Ravindra, Carmen and the Postmaster at Angle Inlet.
Posted by Gem from Airdrie at 9:39 AM No comments:

The I'm Back Blog

Yes, you are reading that correct. I'm back from more than a month away. I was on a nice long Caribbean cruse. It was great , totally relaxing and  well needed. The timing was just wonderful, all the time we were gone, the temperatures here in Alberta just dropped to the bottom. My sons said it was just bitter cold with temperatures in the minus 30s with windchill on top of that. Just a wonderful time to be in the Caribbean where temperatures were in the high plus 20s. Now, as I have done with every cruise, I'll be doing a Cruising Thru Postcards blog - edition 11, when all the postcards I sent have arrived back here.  All right, it's on to some of the cards that built up here while I was gone. There were quite a few and it will take a number of blogs to get thru them.

First is a card  from Zambia , a card posted way back on September 3, 2018 - only 5 months on the go. It's an aerial view of Victoria Falls or The Smoke That Thunders. On the right side is a statue of Dr. David Livingstone. 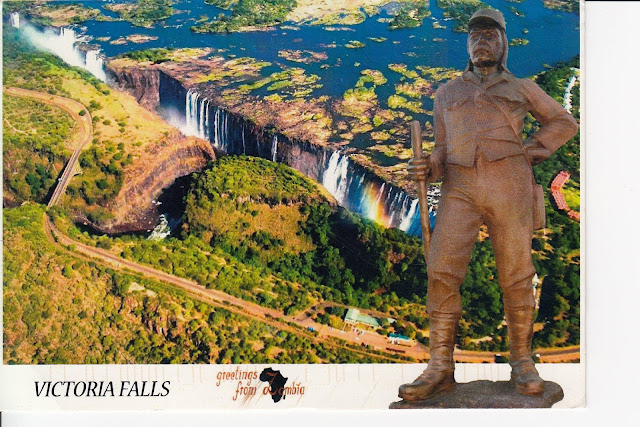 This card is from Bruce of South Africa and Jean Pierre of France. They used 2 stamps on their card. On the left , from 2014, is a stamp from a set of 32 Commemorating the 50th Anniversary of the Independence of Zambia. On the right, the larger stamp was issued in a set of 5 in 2001 and showcases a Solar Eclipse. 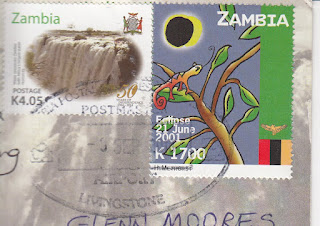 Next is a great view of Paris with a Stryge atop Notre Dame Cathedral  and the Eiffel Tower in the background. Stryges are winged female demons - half woman and half bird. 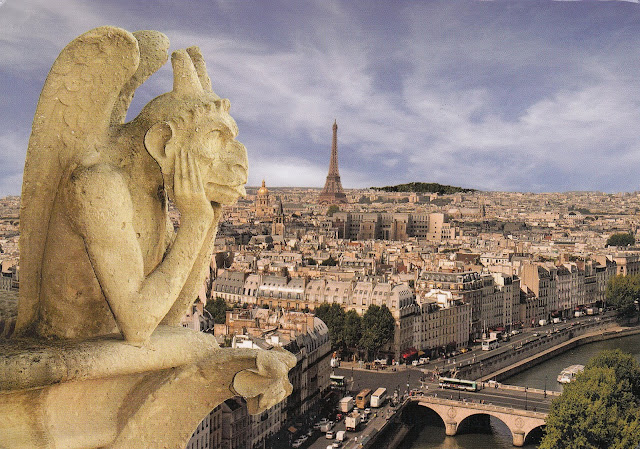 Jean Pierre used a 2018 French Scratch stamp with a Christmas / New Year Reindeer Greeting. It is from a set of 12. 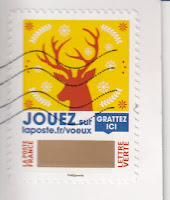 Today's third card comes from Germany. Dominique's card shows part of the former Michelstadt Castle , also known as the Kellerei. Michelstadt in the Odenwald is a medieval town of just over 16,000 people. 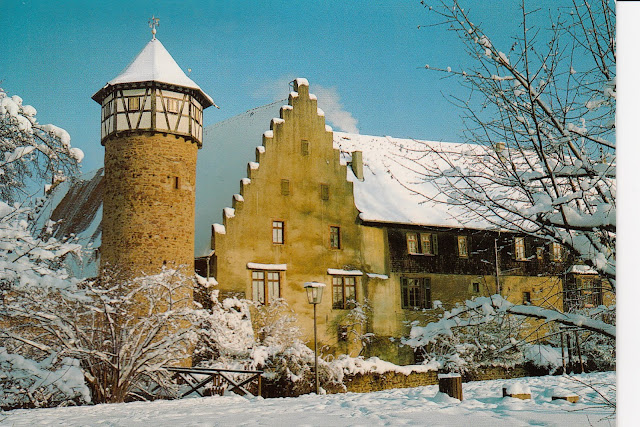 Dominique used the 2018 stamp showcasing German Television Legends - the 1963 Dinner For One.

My next card will be the last for today. Gotta ease back into this blogging business. It's from Brussels , Belgium. Johan's card shows one imaginative vision of the Royal Palace in Brussels. 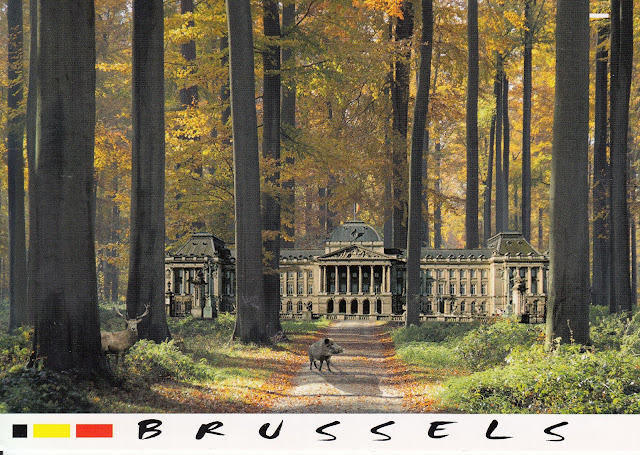 Johan has a great postcard blog called " johan postcards " and you can find it right here .

There you have it - today's blog, my first in over a month. Thanks for cards today go out to Bruce, Jean Pierre, Dominique and Johan. Hopefully it won't be another month  before I'm here again. Hopefully it'll be tomorrow. See you then.
Posted by Gem from Airdrie at 7:58 PM No comments: