More From the Pile

Hello again. I missed a couple of days there, but I'm here now, working my way through the pile of cards on my desk.
Let's start with a card from Sabah, Malaysia - Land Below the Wind. It gets this name simply because it is located below the typhon belt. Sabah occupies the top portion of Borneo , the third largest island in the world. Gabriel's card shows some of the Rungus people living in Kudat near the northermost point of Borneo. Kudat is the largest town in the heartland of the Rungus people and is a major centre of Rungus culture. The Rungus people are famed for their intricate and decorative beadwork, as can be seen on this card. 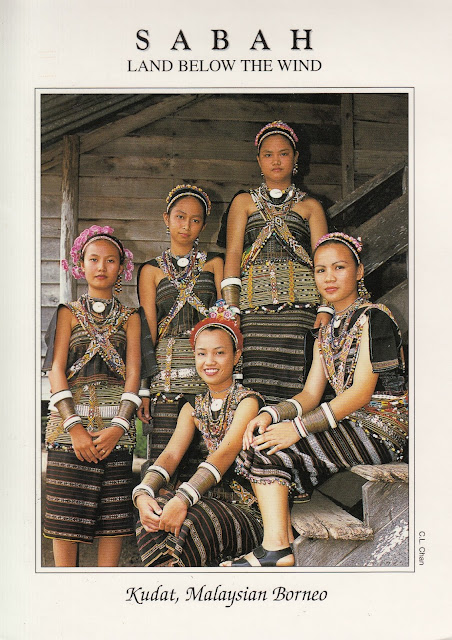 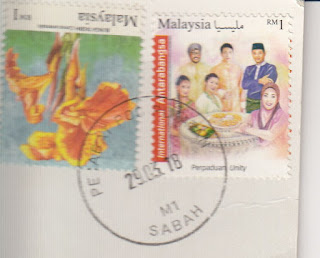 My next card is from France. It's from a glass exhibition held in 2013 in the Lorraine area. It actually took place in the Abbaye des Premontres  which dates from 1705. You can see some of the fine glasswork on display on the front of the card. Dominique used a nice French Airmail stamp issued in 1981. It features French aviators Dieudonne Costes and Joseph Le Brix, who flew around the world in 1928. 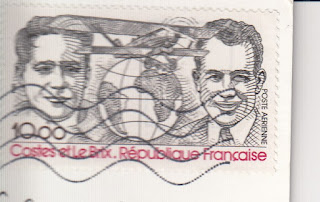 This next car shows Iguazu Falls, on the border of Argentina and Brazil. The highest point of the falls is 82 metres. An impressive sight to see for sure. 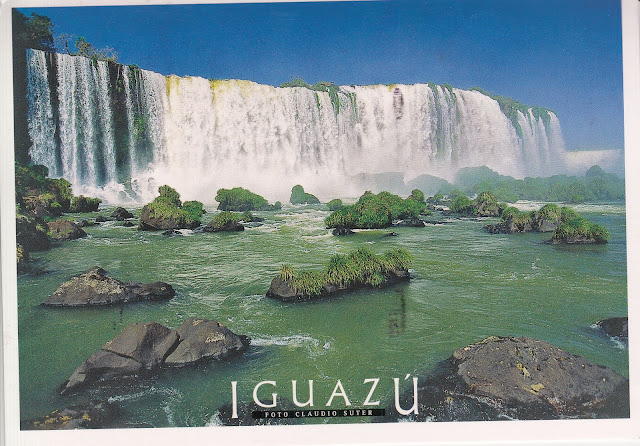 David used 2 stamps from 2017 on his card. They are the two Butterfly stamps. The smaller stamp on the left was issued in 2017 and showcases Domestic Fruit Production. I'm not sue how though from looking at the stamp.

Here's a card that arrived from Brussels, Belgium. It shows a Swiss helicopter operating with KFOR . This is the Kosovo Force - a Nato led peacekeeping mission operating in Kosovo since June 1999 to build peace and stability in the area. 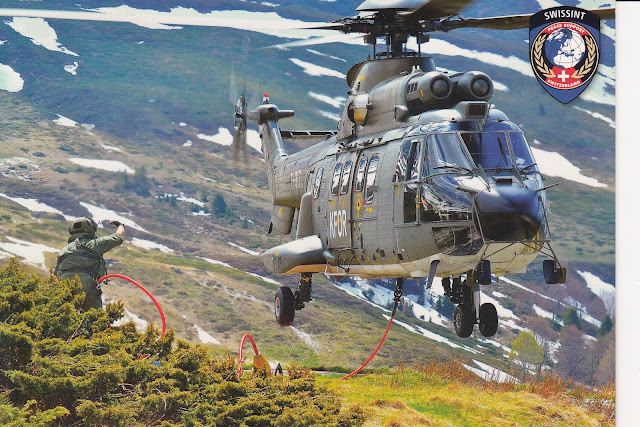 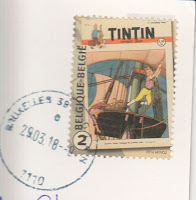 Now it's a card from mailed from Gulluk, Turkey. Here we see Simena, a small village in Antalya Province. It's a popular yachting destination. 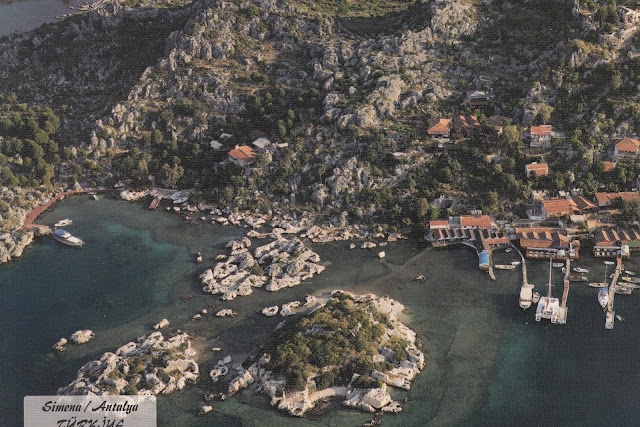 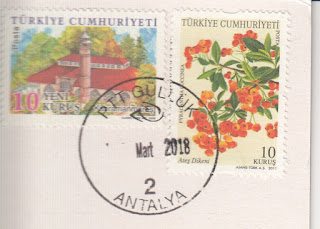 The stamp on the left brought back memories of the 1958-60 Cities of Turkey set. It has 134 stamps and is the largest pictorial set ever issued. Anyone else remember these ?


Last card time. It's Ubudiah Mosque in Malaysia. Located beside the Royal Mausoleum , its golden dome and minarets make it one of the most beautiful mosques in the country. It opened in 1917. 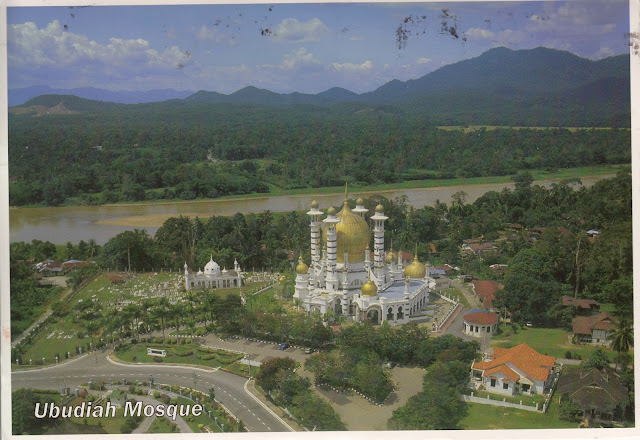 Jobbo used 2 stamps on this one. On the left , from 2015, a stamp, a joint stamp issue of ASEAN countries.
On the right , from a set of 3 issued in 2017, featuring Chinese Festival Food. 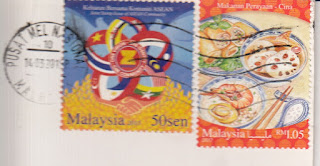 There you have it . An aside to Jobbo - I agree with the guy you ran into in the tearoom at The Majestic- Harper is a cold fish and I disagree with him on his other point- let's just say, he never got my vote and never will.

Thanks for cards today go out to Gabriel, Dominique, David, Meelis, Levant and Jobbo.  Great cards all around. Take care. See you again soon.

Posted by Gem from Airdrie at 2:28 PM No comments:

More From the Pile On the Desk

I'm back again with a few more cards from the pile on the desk. Today is Sunday, sunny and warm and I'm waiting for the ballgame to start in about an hour or so. Just hope the Blue Jays have a little more life than they did yesterday.
Now it's time for those cards, I think. Again , like yesterday, no particular order, just random.

Ostende, Belgium is first up . Ostende is often called " the Queen of the Belgian Seaside " , as it's known for its long beach and promenade. Gerda's card gives a look at the Venetian colonnade or Royal Galleries. It is over 380 metres long with the Thermae Palace Hotel sitting atop the central section. 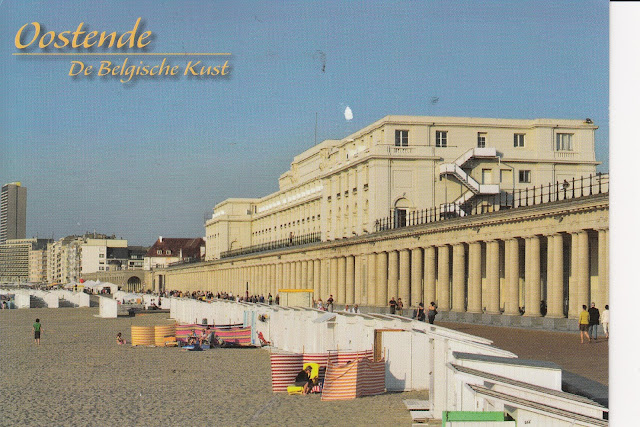 Gerda used 3 stamps on her card. On the left is one from a set of 20 issued back in 2000 for the 20th Century. In the middle is a 2001 stamp called Young Philatelists. I'm not quite sure what that design has to do with young stamp collectors. Then, on the right is a 2017 Butterfly stamp.

The Bamboo Bridge in Kampong Cham, a city in southeast Cambodia , is shown on my next card. The city , on the Mekong River is known for its French colonial buildings. The iconic bamboo bridge has been built, using roughly 50,000 pieces of bamboo every dry season for decades. Last year may have been it last, I'm not really sure. A new modern bridge, Kizuna Bridge, has been constructed just 2 kms south of the bamboo bridge. 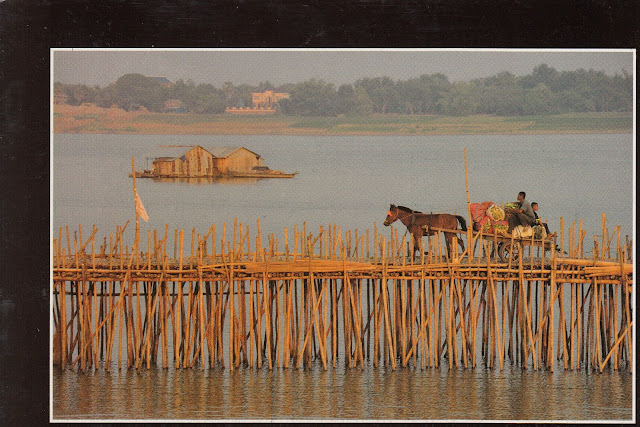 Ravindra , who was visiting Cambodia, sent this card along. He used 2 stamps from a 2009 set of 5 featuring World Heritage Preah Vihear Temple. 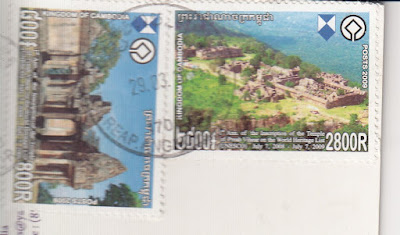 A Postcrosser from the Netherlands sent this next card from Rotterdam. A lady and her bike. I'm not sure just how easy it is to ride a bike in those high heels.  But I guess it can be done. I remember a number of years ago, My lovely Teena and I were walking up Diamond head in Oahu and there was a young lady in similar high heels in front of us , and she made it to the top . I was impressed. 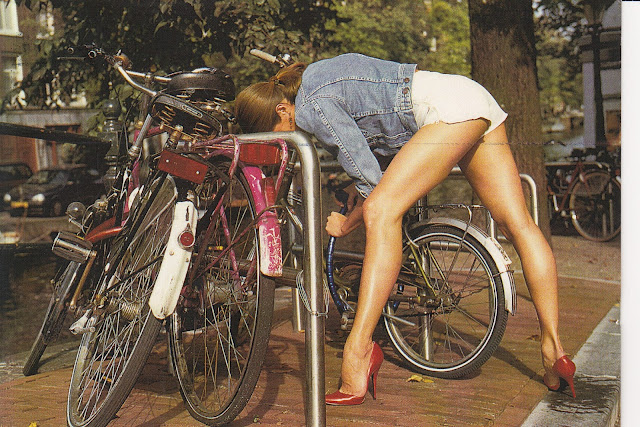 Maria used a 2017 stamp from a set of 10. The set was called For Special Moments. 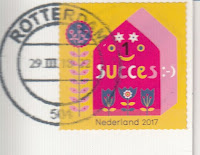 Now it's a card from Spain and this one shows the medieval Pedret Bridge, dating from 1286  and crossing the Llobregal River. It's a stone bridge formed by a large central pointed arch. 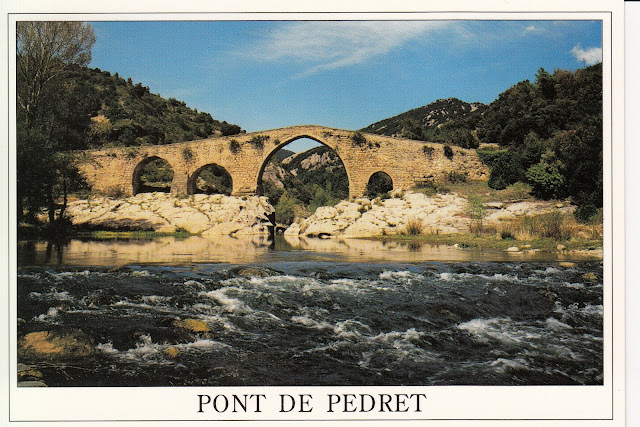 This is a Postcrossing card sent by Josep and Assumpta. They have a great postcard blog called " Letters and postcards from all over " . You can check it out right here .

The stamps - on the left is a 2017 Europa stamp featuring Palaces and Castles. On the right is King Felipe VI , a 2015 stamp.

My last card for today is from Costa Rica and features the Mono Titi. This little primate the Mono Titi or the grey crowned red-backed squirrel monkey is the smallest primate in Costa Rica. They have been listed as Critically Endangered since 1996 and then Endangered in 2008. Their numbers have changed drastically over the years. In 1983 they numbered around 200,000, in 2006 just 4,000 and now it's just around 2,000. 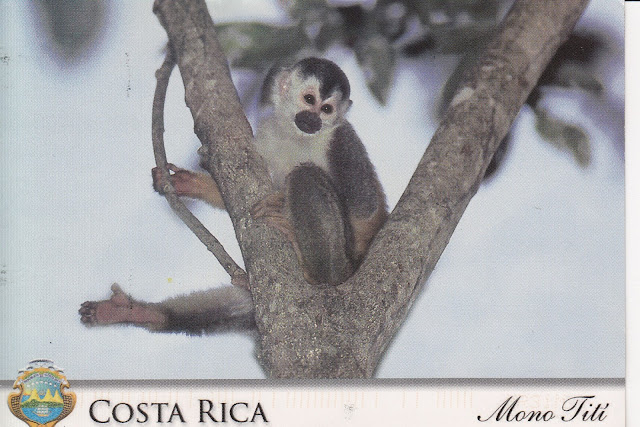 David used 2 stamp from 2017. They are both America UPAEP Issues- Tourist Destinations. 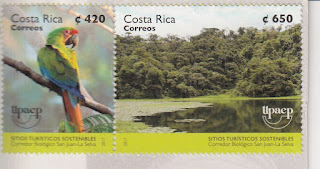 This issue- America UPAEP stamps is a new one for me. I really didn't know they even existed. And they have existed since 1989- member countries of the Postal Union of the Americas, Spain and Portugal, issuing them. Guess I wasn't paying attention to that one.

Well that's it for another day, and the Jays aren't doing too well today either. Thanks for cards today go to Ravindra, Gerda, Maria, David and Josep & Assumpta. Take care now, drop by again soon. I might even be here again tomorrow.

Hello once again. I'm back from a long absence , three weeks , I just can't believe it. Lots of cards arrived during this long time away, but it seems they just never made it here on the blog. It's time to change that , starting now. Today's cards are in no particular order, just how I picked them off my desk.
Let's start with this card from France. It shows the medieval citadel, La Cite, in the hilltop town of Carcassonne in the south of France. It was founded during the Gallo-Roman period and has 3 kms of double walls with 52 towers. The citadel was added to the UNESCO World Heritage Sites list in 1997. 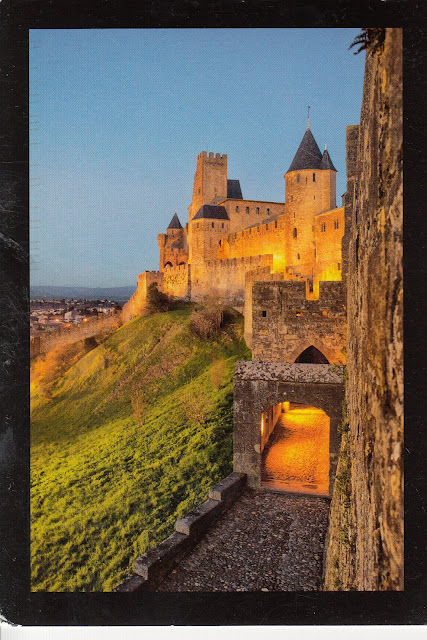 Dominique used a longer than normal stamp from 2016 celebrating the Belfort Philatelic Expo. 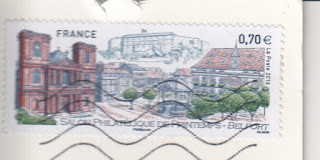 My next card is from Indonesia, Bali in fact. It's not the usual beach scene from Bali but a nice inland country scene. 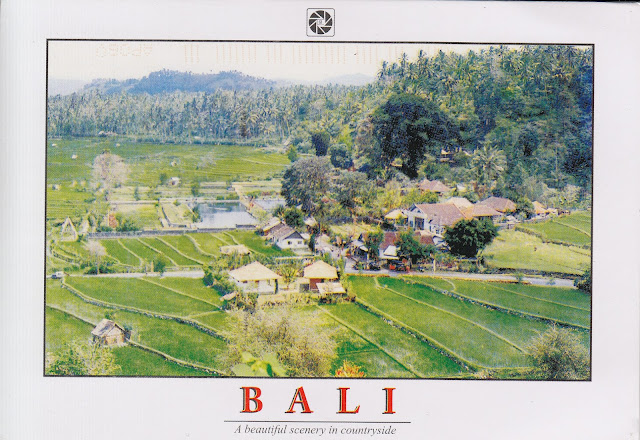 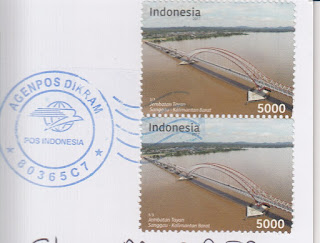 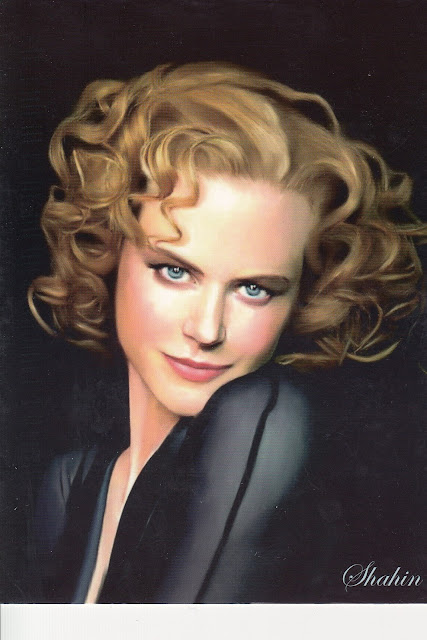 Postcrosser Natalya used an Edible Mushroom stamp from 2013. It's one of 8 in the series. 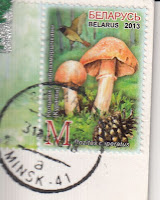 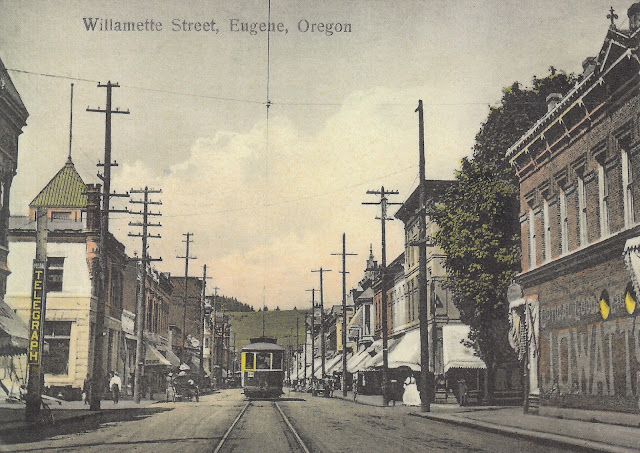 I wonder if you took a poll today, what the result might be, as to what is better the slower times as shown or the fast moving times we all experience in cities today ? 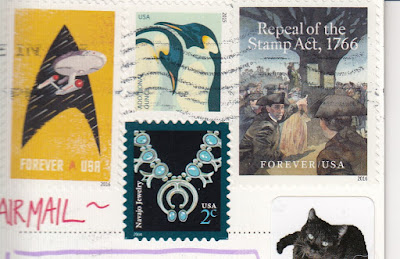 Panama City, Panama is up next. It's a great view of the Miraflores locks, part of the Panama Canal, a sight to see for sure. One I have seen twice, first I went through East to West and then a few years later West to East. The Miraflores locks ships are lifted or lowered 16.5 m , allowing them to eventually transit from the Pacific to the Atlantic or vice versa. 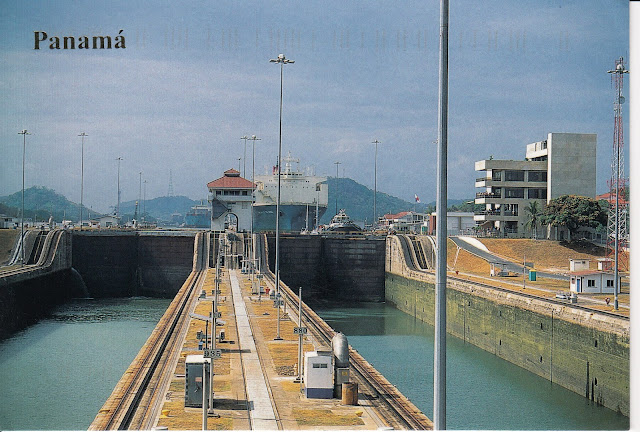 David used a stamp overprinted in 2014 for the Centenary of the Scouting movement in Panama. The stamp was first issued in 1999 without any overprint commemorating the 85th Anniversary of the Panama Canal. 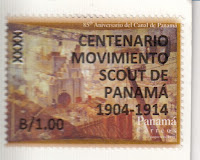 That`s 5 cards so I think that will do for this time. So it`s 5 cards off the desk, but still lots to go. Thanks for cards this time go out to Dominique, Jean Pierre, Natalya, Sarah and David.  I`m hoping to be back here again tomorrow, perhaps with your card this time. Drop by and see.  Cheers !
Posted by Gem from Airdrie at 1:30 PM No comments: