No Postcards and Not Much Else but THANKS

Hello everyone.  Well I don't have a blog today . There's been such a shortage of time since my last update. A lot of planning going ahead. I'm just about out the door , I'm leaving today on a small trip ( actually a big trip ) .  As the great Harry Bellafonte used to sing
" I'm on my way,  Won't be back for many a day " . Yes,  I'm heading out to a new part of the world, at least for me.
So, it's going to be a while before I'm back here live. Just hope you will all come back. Cheers -
But before I go, I have to send thanks out to the following for cards that have arrived the last week or so.
Jean Pierre - card from New Caledonia
Bruce - card from Australia
Stephen & Sara - card from New York City
Sam-Quito - 2 cards from USA
Johan - 2 cards from United Kingdom
Ravindra - 2 cards from Taiwan
Meelis - card from Czech Republic
Dominique - 2 cards from France
Michael - card from Taiwan
Jobbo - card from Netherlands

That's it - BIG THANKS to you all .
As you can see, even if no more cards arrive while I am away, I'll still have some greats cards to show on my return.

Yes, it was indeed 21 years ago today that my family and I left Newfoundland and settled in The West -  Calgary, Alberta .
Of course in those 21 years , 3 months were spent in Saskatchewan and 18 months in British Columbia. I like to refer to those 2 incidents as brief interludes. So yes, the west has been good to us, but as always , it's a long way from Newfoundland.
I didn't collect postcards when I lived down east , that's something I have picked up the last 10 years or so. And this blog - well it'll be 9 yeas old in 7 days, on Nov 13th. With all that been said, it's time to show a few postcards.

First up is the Island of Sri Lanka. On this first card we can see a  a dozen or so elephants that live at Pinnawala, a small village in Sri Lanka, famous for its elephant orphange. It was established in 1975. 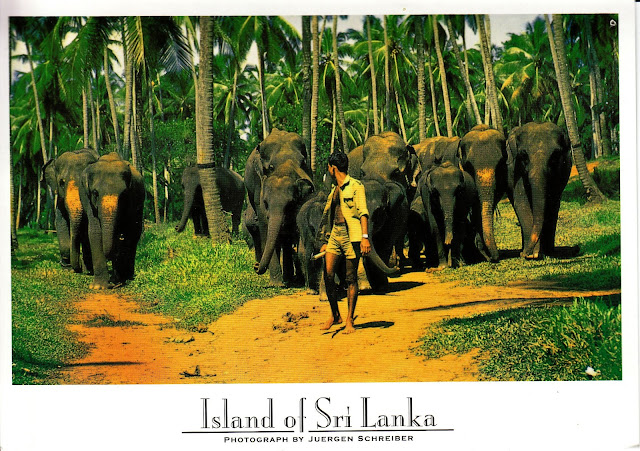 Ravindra used a new 2016 stamp , 1 of 3 in a souvenir sheet, celebrating Sandagiri Stupa, thought to date from the 3rd century B. C. 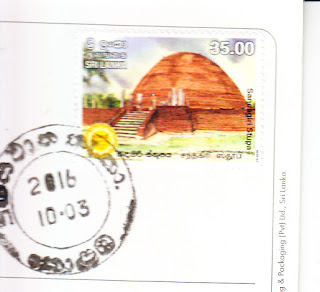 Next is a card from Mumbai. It is showing a sculpture of  Ancient Erotica from the Khajuraho Temple in India. The temple dates from 950 A.D. 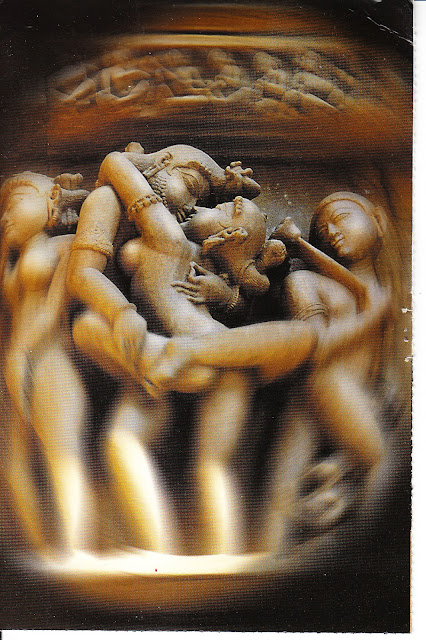 A PostCrosser named Gautam sent this one along.  He used a 2009 definitive featuring J.R.D.Tata. 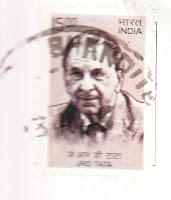 A card from Dominique is the next to be shown on Gem's World Postcards. It gives us a look at Sarlat. Sarlat is a town in a region known in France as the Perigord Noir. It seems that modern history may have passed  Sarlat by, leaving the town well preserved and one of the towns most representative of 14th century France. 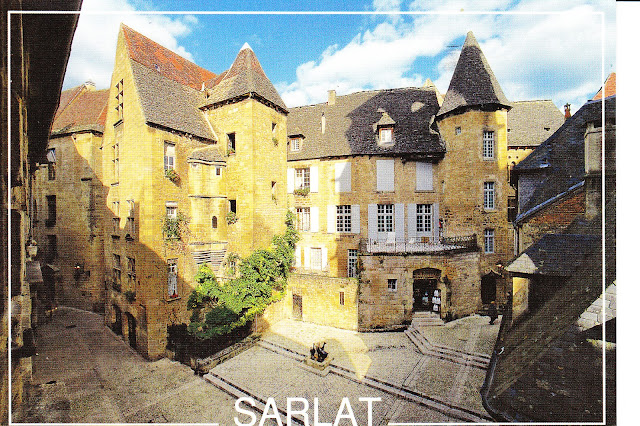 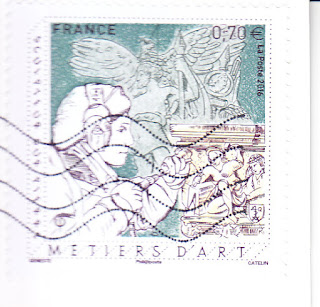 Here's a card from Jobbo, interestingly sent from Germany. Vacation maybe. It's a 1925 photo by Gerhard Riebicke (1878-1957) depicting Dancing Nudes . Many of Riebicke's photos are of nudes in action and and many also  show the photographer's attempt to capture the FKK philisophy of returning to or being in harmony with nature. 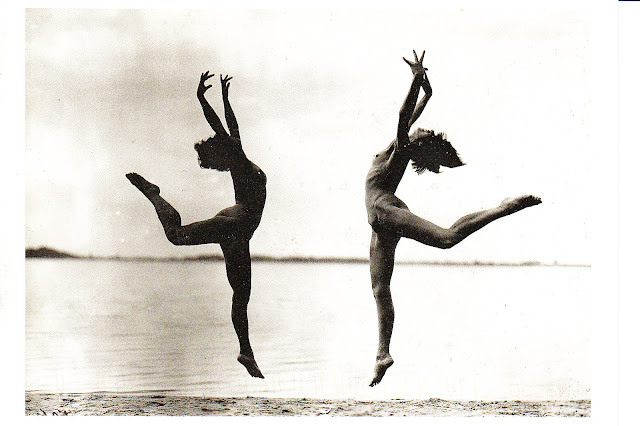 Jobbo used 2 stamps, both celebrating Art. On the left is a stamp  from 2004 highlighting the Bauhaus or modernist Movement.  Then on the right is one from 2006 showcasing the Die Brucke Art Wave.

I know it's only early November but here's my first Christmas postcard. Merry Christmas Sinner ! A band of Nuns. I really like this card , I got a great laugh when I found it in the mailbox. 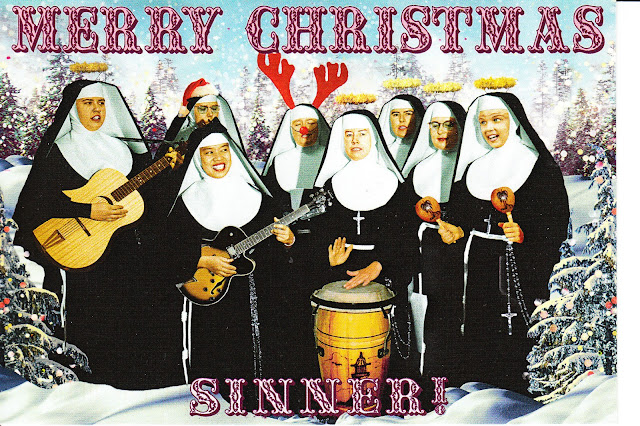 Once again Johan comes through with Belgian new issues - this time The country's Christmas stamps. On the left is one to be used in Belgium , while on the right is one for Worldwide mailing. The Best Wishes Christmas cancellation was obtained oin Lede, a city of about 18,000 in East Flanders. 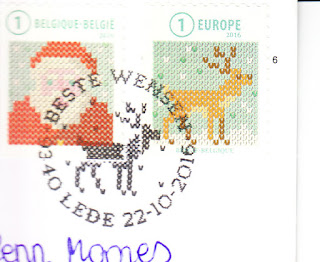 It's time to bring the blog to a close for today, with this final card from the Sultanate of Oman. Jean Pierre's card shows wadi shams in Oman. 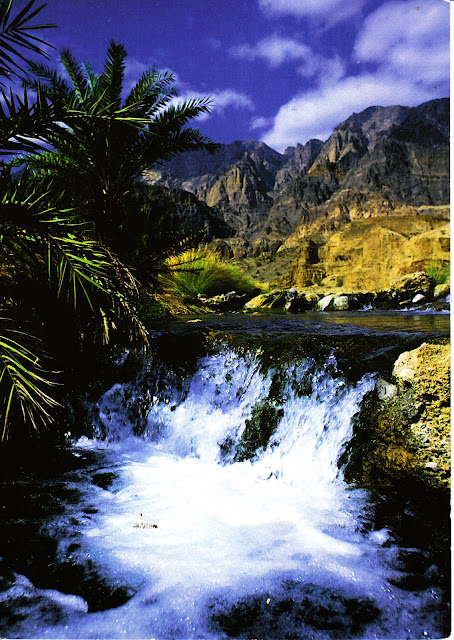 Great stamps on this one. On the right is a 2015 stamp celebrating the country's 45th National Day. In the middle is 1 of 4 in a set depicting the traditional Omani Dagger. Then over on the left, well I'm not sure what I have. It looks like a great stamp but I'm not so sure it is a stamp. It doesn't have any value on it, no Baisa.

It celebrates 60 Years of India - Oman Diplomatic Ties. Now, I know there was a stamp issued to mark this event, it showed the Taj Mahal and the Sultan Qaboos Grand Mosque. You can see though, this is not that stamp. Perhaps it is a label of some sort.
Anyone have any thoughts on this ?

There it is, another update. Thanks for cards today go out to Ravindra, Gautam, Dominique, Jobbo, Johan and Jean Pierre. Thank you all.

Don't forget now, if you have any sort of comment, don't be shy, Leave it ?
Posted by Gem from Airdrie at 1:48 PM No comments: