Well, I'm back again after a long period away. I don't really mean away, I mean just not on the blog. This month has been so very busy, with family obligations, visits, etc.
Now, without further ado, let's have a look at some postcards.First up is Turkey. The card shows the travertine terraces of Pamukkale. 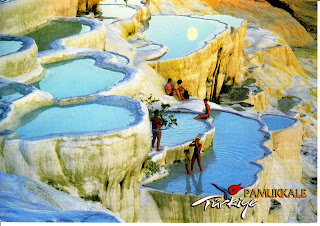 Located in south western Turkey , the travertines are a set of calcium cliff bathing pools overlooking the city. The petrified waterfalls are a UNESCO World Heritage Site. The card is from a Postcrosser in Istanbul, who used a rather large stamp from a beautiful set of two issued in 2008 featuring railway stations. 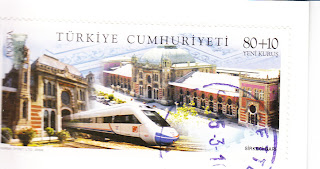 Now a card from Lithuania. The card shows something that I truly did not know existed. It is a card of The Hill of Crosses. This is a pilgrimage site in northern Lithuania. 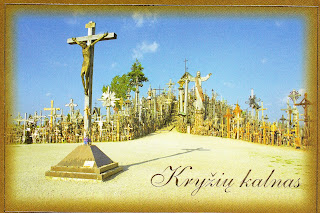 Its exact origins are unknown, but it is believed to have originated after 1831. In addition to crosses, crucifixes, statutes and even rosaries have been placed here by Catholic pilgrims. Estimates put the number of items at more than 100,000. Also sent by a Postcrosser, the card appears to have a number of stamps, but I believe only the item on the far right is indeed a stamp. It was issued in 2009 and is 1 of 2 Christmas stamps .

The other 3 items are labels of some sort.
My next card is from Ukraine or at least bears Ukraine stamps. It is a card showing Mount Sokol (Falcon) in the Autonomous Republic of Crimea , near the town of Noviy Svet. 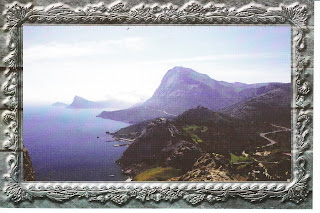 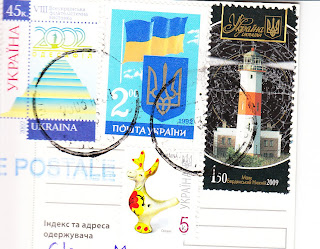 The final stamp was issued in 2007 and is 1 of a set of 5 definitives featuring ceramics. 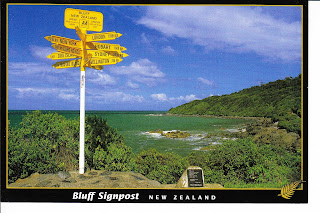 Bluff is the southernmost town on South Island. The signpost depicts distance and direction to various other cities and locations around the world. This is where New Zealand's main highway terminates at its most southern point. Need I say it again. Another card from another Postcrosser. The stamp is from a set of 6 definitives issued in 2009, 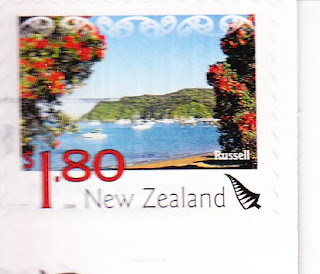 The last card for this time is from Canada. It features a Pacific Western Airlines Boeing 737. 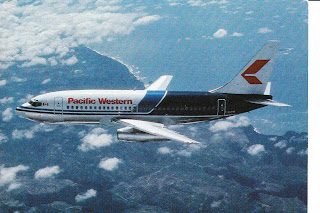 Sadly Pacific Western no longer exists. The card is from my lovely Teena. She knows I like aircraft/airlines on postcards, so every now and then she finds one for me. Even though I didn't work for PWA, this is the type of airplane that I started my 28 year airline career with. It reminds me of all the great times I had at Eastern Provincial Airlines, C P Air and Canadian Airlines International. Those were the days. Teena used a 2009 Lest We Forget stamp. 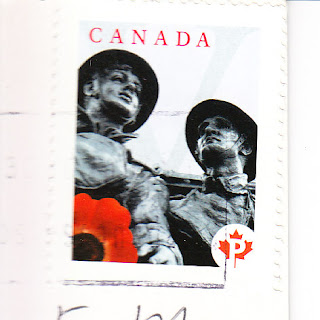 I guess that is all for this time. Thanks to all the Postcrossers whose cards are featured here today. Thanks also to Teena for her card. Take care,
I will try to be here again tomorrow.
Posted by Gem from Airdrie at 11:43 AM 3 comments: