The Caravelle, Sunglasses, Eyeglasses and No Glasses, A Bridge and More

How is everybody today ---  Covid got you down  -- I'm not surprised . It's sort of like the movie  Groundhog Day.  You get up and everyday is pretty much like the one before. One change I see though is that when I find a postcard in the mailbox, it always a different card and never from the same person. So that's good.

My first card today shows a few of the buildings  and views around Ilsenburg, a small town in Saxony-Anhalt, Germany. It has a population of around 10,000. 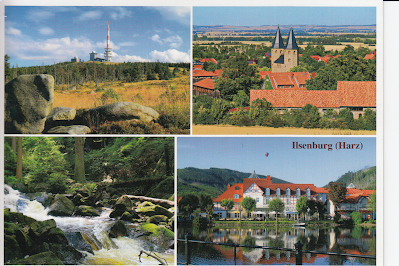 Andreas used 2 of the Flower definitives along with a wonderful minisheet of 1 from 2020. It is a Europa stamp and shows the Ancient Postal Routes.

Today's second card is a case of Girls Will Be Girls. It takes all kinds. These three could be triplets for all I know. They were on the cover of The New Yorker on July 30, 2007. 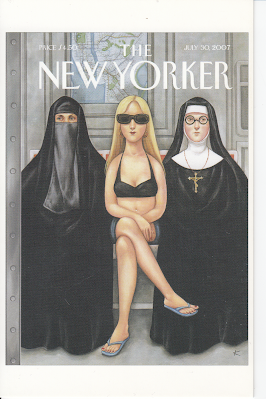 I don't know the sender of this card. Every now and then I'll receive a card from somewhere in Canada and the sender often doesn't identify himself or herself. But that's ok , a little mystery is always good.

The stamp is a new one issued this year, even though it shows a rooster and 2021 is the Year of the Ox. Strange  no doubt. I'll have more about that in a later blog, soon. 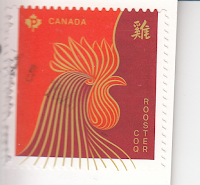 Card # 3 shows a panorama of the old town center of Regensburg, at the riverside with thunderclouds overhead. To the  left you can see The Stone Bridge or Steinerne Brucke, the oldest remaining bridge in Germany and all Europe . This is a 12th century stone bridge across the Danube. For more than 800 years, until the 1930s, it was the only bridge across the Danube. Louis VII of France and his army used it to cross the Danube on their way to the Second Crusade. It served as a model for other stone bridges built in Europe in the 12th and 13th centuries: the Elbe bridge (now Augustus Bridge) in Dresden, London Bridge across the Thames, the Pont d'Avignon across the Rhone and the Judith Bridge (predecessor of the Charles Bridge ) across the Vitava in Prague. 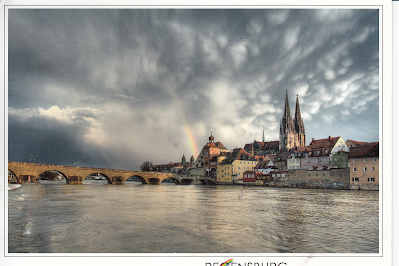 Here's another card from Dominique. It shows a few of the buildings in the commune of Collonges-la-Rouge in the Nouvelle-Aquitaine region of France. The whole village is built entirely of red sandstone and its marketplaces date back to the 16th and 17th centuries. 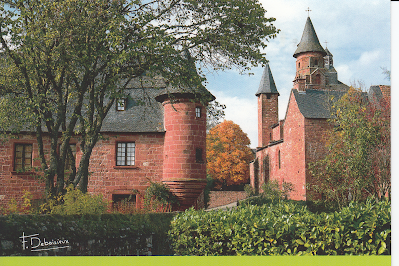 This next card is the final one for this time. Of course no blog of mine should end without at least one aircraft card. This one is not exception. It's an Air France Sud Aviation Caravelle on the ramp at Frankfurt. The Caravelle was developed in the early 1950s and had its maiden flight in May 1955. Air France flew its first Caravelle on May 6, 1959 from Orly to Rome, Athens and Istanbul. The airline continued to operate these aircraft until 1981, utilizing 54 Caravelles.

Pilots praised the Caravelle for its gentle touch and its large wings , making it easier to ensure a kiss landing. 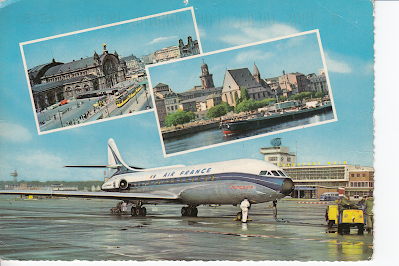 Johanna used 2 Flower definitives along with a stamp from 2020 commemorating the 75th Anniversary of the Allied Military Government Stamps.

That's all for this time my friends. Thanks going out today to Andreas, Chrissy, Dominique and Johanna. It was great to receive your cards.

Take care now -- wash your hands, wear a mask and keep your distance.

Posted by Gem from Airdrie at 5:29 PM