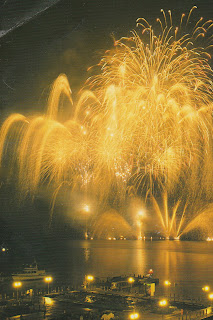 May's first posting highlights a number of postcards and an envelope , all received either today or yesterday. The first up will be 2 postcards from Taiwan, R.O.C. Fireworks over Sun Moon Lake is featured on the postcard sent By Hui-Wen Huang. I am assuming that she is a reader of this blog which would explain her sending the card. She used 2 very nice stamps , especially the bird stamp. The very brightly colored bird stamp was issued in 2008 and is 1 of a set of 4. A very nice set, indeed. The other stamp , issued in 2007, is 1 of a set of 4 flowers.
Sun Moon Lake , surrounded by green mountains, is the pearl of Central Taiw 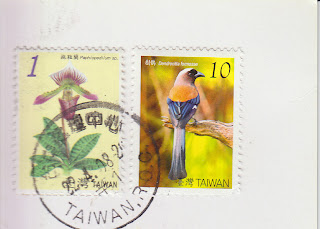 an. The Eastern part of the lake is round like the sun, while the Western part is shaped like a crescent moon- hence the name - Sun Moon Lake. The beauty of Sun Moon Lake is found in the surrounding mountains. From the lake, tier upon tier of countless peaks can be seen rising upwards into the sky. It is a very famous spot for visitors, especially foreign visitors.

The second Taiwan card shows The 101 Building. It was sent by Rachel, a fellow Postcrosser. She used a very nice stamp, one about which I wasn't a 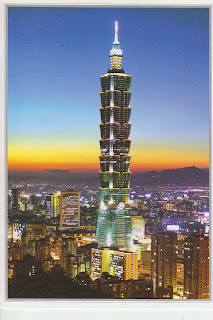 ble to find any information. It shows a group of traditionally dressed band musicians. This card is the first card that Rachel has sent as a Postcrosser, so I am honored to receive it. 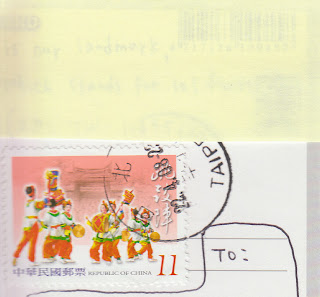 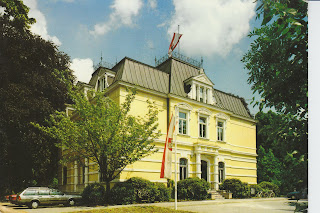 The card from France shows the town on Clapiers in Southern France. It was sent by Thierry Viala who must have visited my blog. He used a stamp from a 2005 booklet strip of 5. 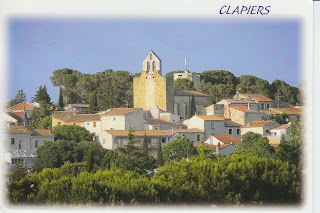 Of the card from Finland I just want to show the stamp right now. It was issued in a 2007 booklet of 4 values featuring trucks in traffic. A great set if one had them all. 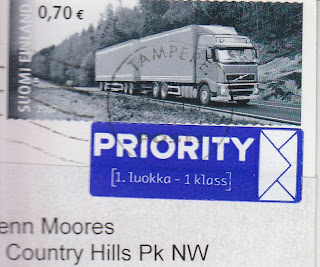 And finally the envelope from Germany. It was sent by Igor of the blog http://webmastermarkt.blogspot.com fame. I show the envelope for 2 reasons. First, it has in the upper right corner, what I assume is a personalized computer generated pos 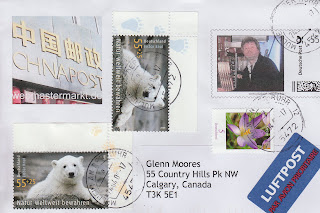 tage. It even features Igor himself. My 2nd reason for showing this is the 2 stamps showing the polar bear. Not just any polar bear, but Knut himself. Knut was born at the Berlin Zoo on December 5, 2006. Rejected by his mother at birth, he was raised by zookeepers and became a popular tourist attraction and commercial success. Knut has appeared on the cover of Vanity Fair and is the subject of a book entitled Knut:How One Little Polar Bear Captivated the World, written by Craig Hatkoff. Knut became the center of a mass media phenomenon dubbed Knutmania that spanned the globe and quickly spawned toys, media specials, dvd's and books. Due to Knut's popularity, attendance at the Berlin Zoo increased by 30% in 2007.
Just a great cover, thanks Igor.
Posted by Gem from Airdrie at 6:22 PM

do you have looked in the envelope?