Back On The Blog, Finally

Well I am finally back to the blog after some 20 days. Where have I been all this time, one may ask? Really nowhere. I had a new home built and have finally moved in. With all the packing, moving in and unpacking , the blog was a low priority. Also, not having the Internet for a week or so and mail redirection, the blog was pretty much on the back burner. My new address is just to the left side of this blog and for anyone who needs or wants to contact me , I also have a new email address as follows : gemsworldpostcards@shaw.ca .

In the time I was absent from the blog, I did receive 22 postcards from Germany, U.S.A, Poland, Finland, China PRC, Norway, Netherlands, Portugal, China ROC, Italy, Lithuania, Russia and Israel. I have selected 5 to show off in this update. My first card today is from Finland. I have to say , it could possibly be my most favorite card that I have yet received. I find it an outstanding card.
It was sent by Merja , a Postcrosser in Tuusula, Finland. Merja is the little girl in the middle on the card. This is a picture that her father took in 1953. 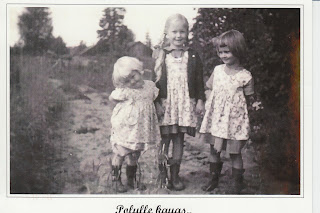 Merja turned it into a most beautiful postcard. Then to top it off she went and had the same picture turned into a stamp at Finland Post. 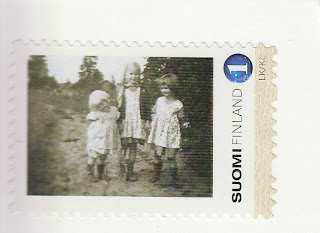 She said on her postcard that she wanted to send something unique, and she sure did send a unique item. Thanks Merja for this one in a lifetime item. It's going to be hard to top this .

My second card is from The Netherlands. It is from Ioni , another Postcrosser. Ioni's card shows a very stately church. 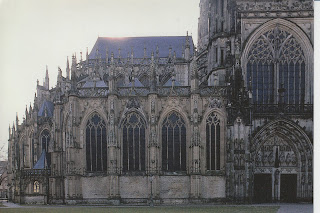 I have no other info about this building but is it quite impressive . Ioni used 3 wonderful stamps from 2009. Two show helicopters and the third shows an impressive KLM Boeing 747. 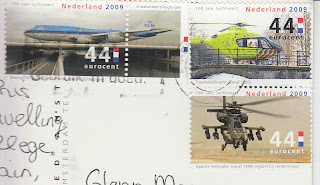 A great addition to my aircraft and airline name s on stamps collection. Thanks Ioni.

The next card , from The U.S. shows The American Philatelic Center in Bellefonte, Pennsylvania, U.S.A. A former match factory, it is now the headquarters of the association. 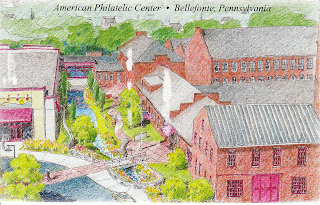 Martha from State College, PA. sent this wonderful card along. Martha used The Phil Silvers Show stamp , from a set of 20 issued in August and a James Michener , author stamp from 2008.

Phil Silvers brings back a lot of memories , there was never a dull moment watching that show.

Now a card from China. It shows Tibetan villages at the Raóg Lake in Nyingchi area. 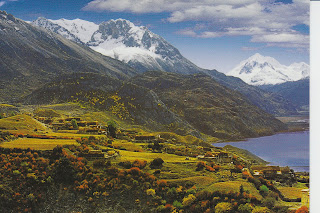 I'm not going to get into any political talk about Tibet, other than to say that from this postcard it certainly seems like a peaceful place. One more note , His Holiness The Dalai Lama just finished a visit to the city of Calgary, where he was white hatted, a western tradition where prominent visitors to Calgary are presented with a white stetson cowboy hat. His Holiness looked quite dashing in his red robe wearing a white cowboy hat.

Today's final card is from Israel. It shows The Western Wall in Jerusalem. 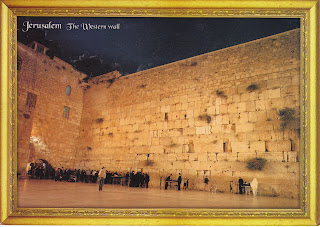 Rita , another Postcrosser sent the card and used a couple of quite nice stamps from 2009. The smaller one on the left is from a beautiful set of 3 set issued for astronomy. The larger stamp on the right commemorates The Dead sea.

Thanks Rita for this card and those great stamps.

That's it for postcards this time around. Now I want to show a stamp that Canada issued on Oct. 19th. It is a stamp saluting Canada's war dead. 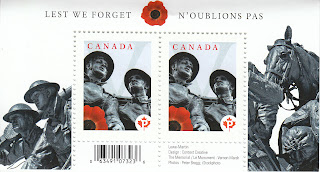 It was issued in a booklet of 10 and also in a souvenir sheet of 2. The stamp has a signature V for Victory in the background. This stamp honours the courage of our soldiers and remembers all those who have made the ultimate sacrifice. I intend to use this stamp almost exclusively as long as I can buy it.

Sorry to ramble on there , but I have been waiting for this stamp, all summer and fall.
Posted by Gem from Airdrie at 6:03 PM 2 comments:

French Guiana # 228 in My Collection

Well, as you can see from the list of needed countries on the left, I have managed to cross off another one. French Guiana now becomes # 228 in my collection of countries and entities from which I have received a stamped and mailed postcard. While not a country in itself, it is a distinct place and belongs in my collection. French Guiana is an overseas department of France. It borders Brazil and Suriname. Its capital is Cayenne and its population is around 222,000.
My card, showing a pinkish tropical fish is compliments of Emerald Jungle Village. 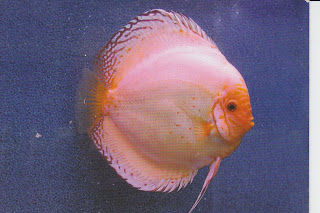 EJV is a tropical nature center along the eastern Panamerican highway. It is often visited by naturalists that come to enjoy the Amazonian rain forest of eastern French Guiana. Just because of its status as a department, the stamps used are common French issues.

This now completes South American in my collection, it was the only place missing. Thanks EJV.

Now for a housekeeping notice. Anyone sending me a postcard , please take note of the following: as of today, I have a new address. It is
Glenn Moores
955 Windsong Drive SW
Airdrie, Ab
Canada, T4B 0N5
Posted by Gem from Airdrie at 8:22 PM 3 comments:

Well I have no excuse for not updating this blog since Sept 24th. Just pure laziness, I guess. Hopefully next week will be better, of course that depends on the cards. Anyway I want to start off today with a card from Martha, a Postcrosser living in State College, PA, U.S.A. The card is a really nice picture of one of the Empire State Building photographs from the construction era. 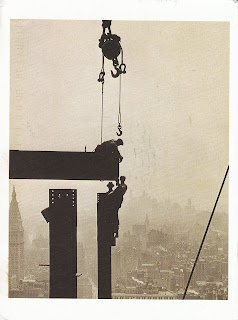 It's entitled , putting a beam in place. It took a lot of guts to hang out at 80 or 90 stories . I have seen other pictures of these guys laying on a bean, resting or sitting on a beam , eating lunch. Just amazing.
Thanks Martha for this great card.

The next two cards are from Republic of China. The first one is from Wu Wei Yi, a somewhat regular contributor to this blog and my postcard collection. 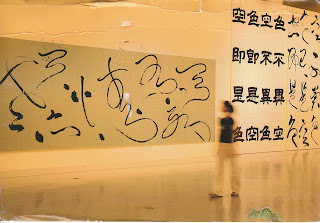 His card shows a calligraphy exhibition at the National Taiwan Museum of Fine Arts in Taichung. Two nice stamps used on the card. 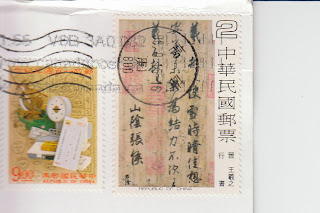 The other card from Republic of China was sent by Postcrosser Mavis from Kaohsiung, a city in the south of Taiwan. It shows one of the old steam locomotives of the Ailshan Forest Railway. 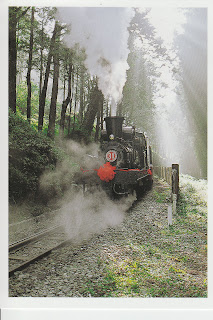 This railway is a 86 km network of narrow gauge track. It's a great picture though with the steam engine just chugging along. It was constructed in 1912 and today mostly carries tourists. Mavis used a couple of neat stamps, 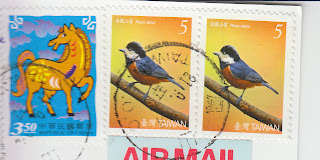 including a Chinese zodiac stamp featuring the popular horse and two stamps showing a characteristic bird of Taiwan, the titmouse with red abdomen.

The next card is from Beijing , People's Republic of China. Sent by Postcrosser Zhang, it shows The Great Wall of China at Jiankou. 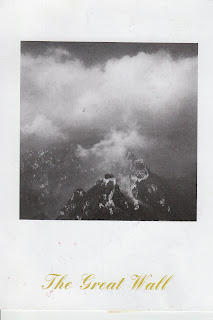 That's something I would love to see. Two stamps used included a beautiful tiger stamp from a set of two issued in 2004. 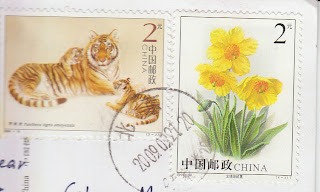 I would love to have the other one from this set. Just a wonderful set.

This label was stuck to this postcard . 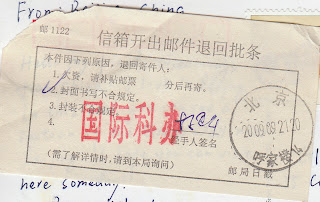 Can anyone out there tell me what it means ? Appreciate hearing from you on it.

And finally , this beautiful jet image was received from Elisa in Tampere, Finland. 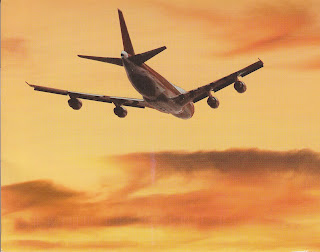 Unfortunately it's not a postcard , but some sort of fold over postal note. But a beautiful picture just the same and it would have made a great postcard.

I want to take another moment to tally up the postcards for September. In total I received 35 postcards , of which 26 were through Postcrossing. I mailed out 31 postcards , all 31 went to Postcrossers. I added 1 new country or entity to my quest for a postcard from all countries . So all in all , not a bad month

Don't forget your comments, love reading them.
Posted by Gem from Airdrie at 3:09 PM 2 comments: