A Couple of Newfoundland Town Postmarks, A Contest Winner, and So Much More

Hello again. I have lots of great postcards to have a look at and a contest winner to announce today. I won't get to all the cards this time, but keep watching.
Let's start with the contest from my last update. The winner is Johan of  johan postcards . His guess was Anne of Brittany and it was the first correct guess received. Johan will receive a Joint Souvenir Sheet issued by Canada Post to commemorate the 100th Anniversary of the Battle of Vimy Ridge. The sheet contains two international rate stamps issued by Canada. One stamp is the same design as the domestic Canadian stamp issued for Vimy Ridge on April 8th. The second stamp is the French designed stamp featuring the Canada Bereft statue at the Vimy Memorial. This French designed stamp will only be available as part of the joint souvenir sheets and joint first day of issue envelopes. So there won't be a lot of these stamps floating around.
Congratulations Johan.

Now on to the cards. I'm beginning with another card for my Newfoundland Towns Postmark Collection. This time the card is from a town called Pacquet. The card shows a small fishing boat moored among ice pans. In spring and early summer arctic ice drifts south , creating hazards for boats and fishing gear.
Pacquet is a small town on the northeast coast of Newfoundland in White Bay. The town had a population of 184 in the 2011 census. Pacquet was once part of the French Shore of Newfoundland , so it is likely that it was settled by French speaking fisherman. It was a base for French seasonal fisherman from about the time of the Treaty of Utrecht in 1713. The first officially recorded residents were noted there in 1857. 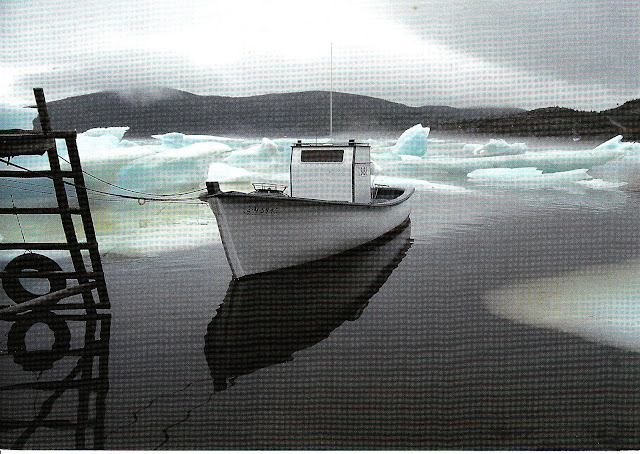 A 2017 Year of the Rooster stamp was used on this card. 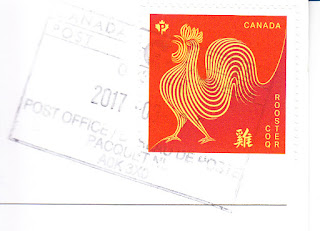 Now it's another card from another island. From the island of Newfoundland to the island of Sri Lanka. Hey, I just realized that  3 of my next cards are from islands. Sri Lanka, Maldives, and Sri Lanka again.

This card is titled " Flowers of Sri Lanka " and features the  Agapanthus africanus, a flowering plant native to the Cape area of South Africa. Why it's on a card  of Sri Lanka , I leave to others to discover. 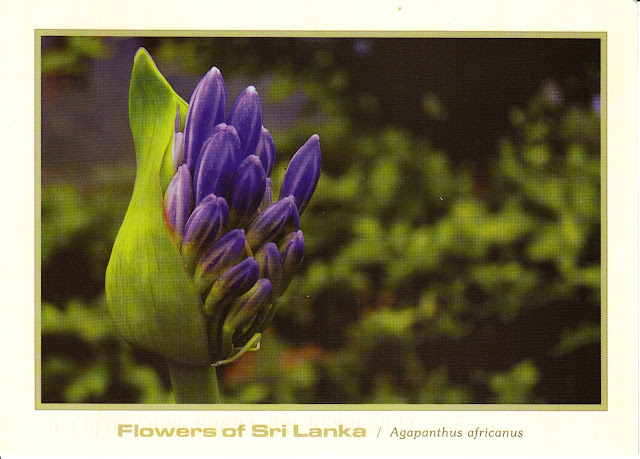 This is a card sent by David from his recent trip to Sri Lanka and other locales. The stamps are from a 2015 set of 7 celebrating Kumana National Park. It's a great topical set of the wild animals of Sri Lanka. 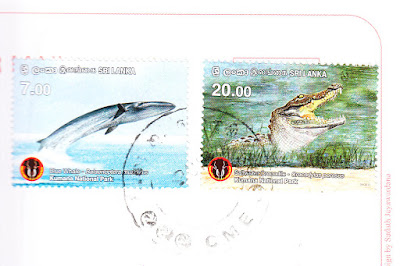 A card from Male City, Maldives is next. Male is the capital city of the Maldives , an island in the Indian Ocean. With a population of just over 133,000 and an area of 5.8 sq km, it is one of the most densely populated cities in the world. 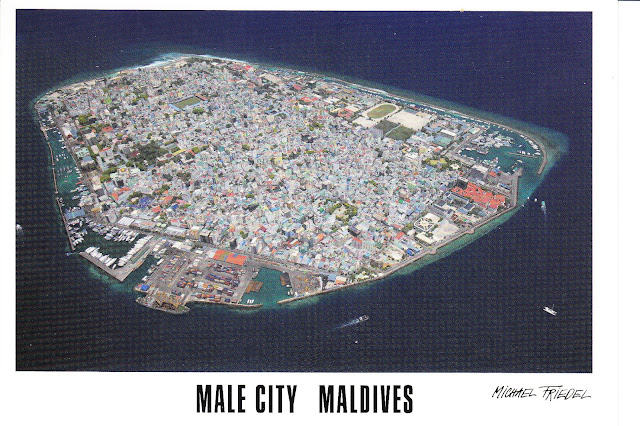 It's another card from David, and he used 2 stamps about which I have not been able to find any information.

Next it's The Rock, not the actor and wrestler Dwayne Johnson and not any radio station , which are often called The Rock, but The Rock of Gibraltar. Yes, that one - the 426 m high limestone promontory near the southwestern tip of Europe on the Iberian Peninsula. One more thing - let's not confuse this Rock with that other Rock - the island of Newfoundland - referred to , here in Canada as The Rock. I know , I know , that's enough about The Rock. 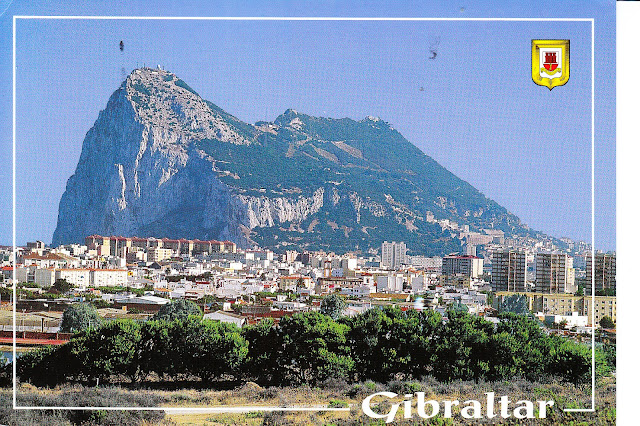 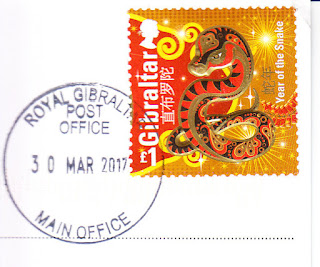 Now it's back to Sri Lanka again. The wonderful old bridge on this card is the Nine Arches Bridge, often called The Bridge in the Sky, is one of the iconic bridges in the country. It is located in Demodara, between Ella and Demodara railway stations. The nine span bridge is 91.44 m in length and at a height of 24.38 m . Construction on the bridge ended in 1921. 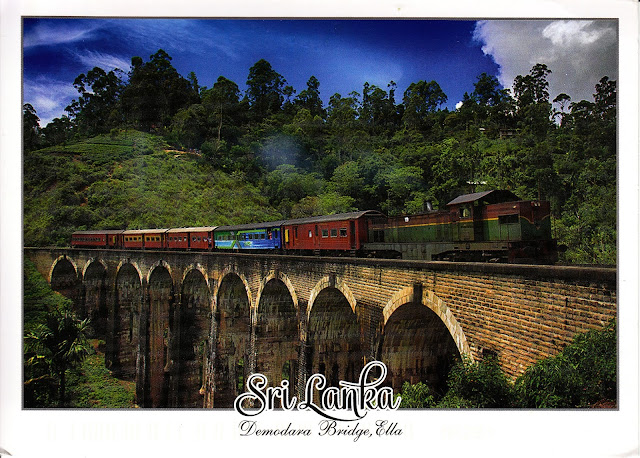 Ravindra wrote on this card that he had traveled over the bridge on this same train a number of times. We have a nice selection of stamps on this one. On the left is a previously issued stamp featuring Orion, with a new surcharge for 2016. It is supposed to be a new value of 5.00 on an old value of 45.00 . For the life of me, I can't see it as that - looks like a 5.00 value over a 5.00 value.  The center stamp was issued in 2016 and celebrates National Meelad Un Nabi - The Prophet's Birthday. On the right, a stamp from 2017, issued for National Integration and Reconciliation Week, which was held Jan 8-14 . 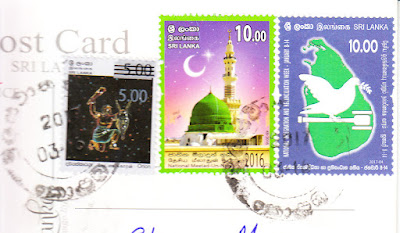 Here's a card from Albania. It was posted in Elbasan, but is of Berat. Located in south central Albania, Berat is one of the world's oldest continuously inhabited cities, dating back possibly to 3000 BC. Berat was inscribed on the UNESCO world Heritage Site list in 2005. 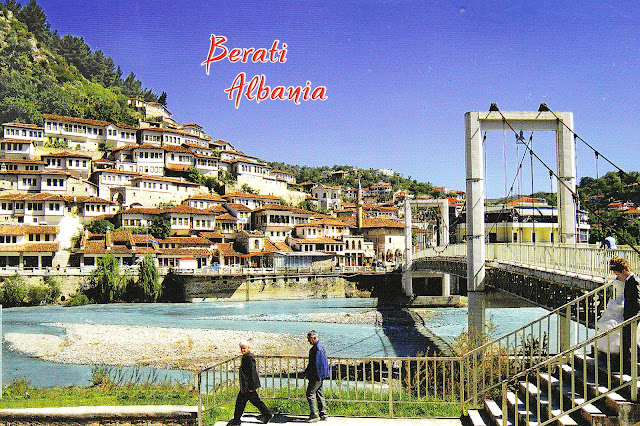 I love it when a card arrives loaded with stamps, as this one surely did. Indrit used 5 great stamps from a set of 25  issued in 2004. The set celebrated the 50th Anniversary of the National Art Gallery in Albania.

We jump over to Belgium for this next card. It's Norbertine Abbey or Tongerlo Abbey. The abbey was founded in the 12th century and is indeed a place of tranquility and peace. The abbey was also known as the home of Tongerlo Abbey Beer. It's no longer brewed at the abbey , but still available elsewhere. I hear it tastes great. 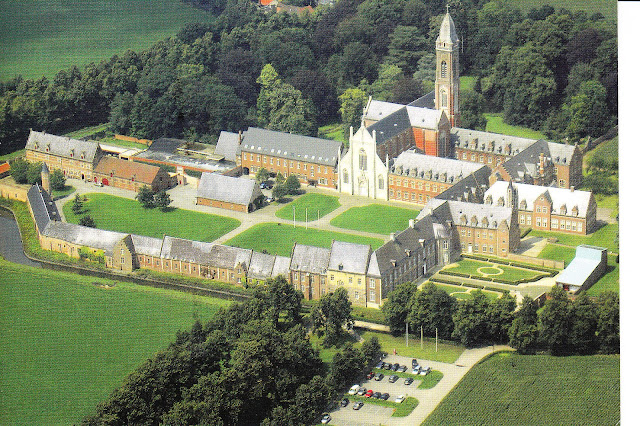 Gerda again used a great stamp on her card. The large one with the Polar Bear is from a souvenir sheet of 5  issued in 2016 highlighting Endangered Animals. I was lucky enough to receive the Rhino and the Gorilla stamps on an earlier card from Gerda. She also used 2 Bird definitives , one from 2007 and one from 2009. 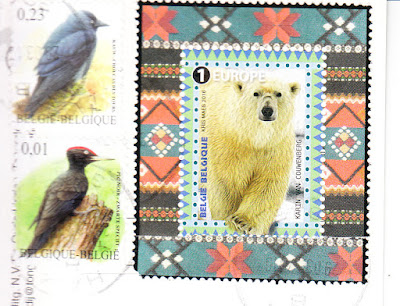 I mentioned earlier about Indrit's card arriving loaded with stamps. Here's another example, this one from Moscow, Russia. I think this card is a Russian example of a Pin-Up card, at least that's what Ivan wrote. 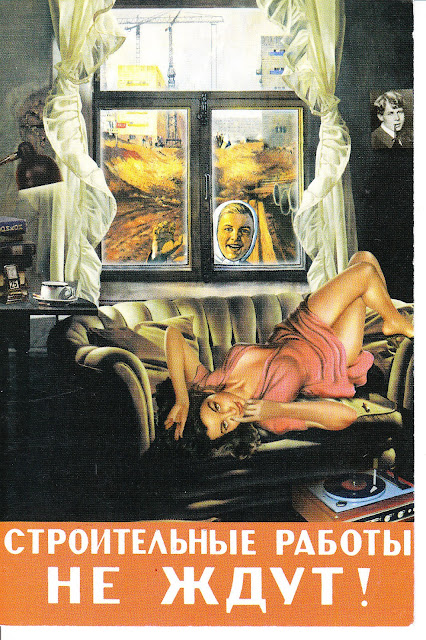 Lille, France is the subject of this next card from Dominique. Lille is a city in northern France, near the border with Belgium. On the card we can see the old exchange place, where old books, old postcards and stamps and other collectibles are sold every day. 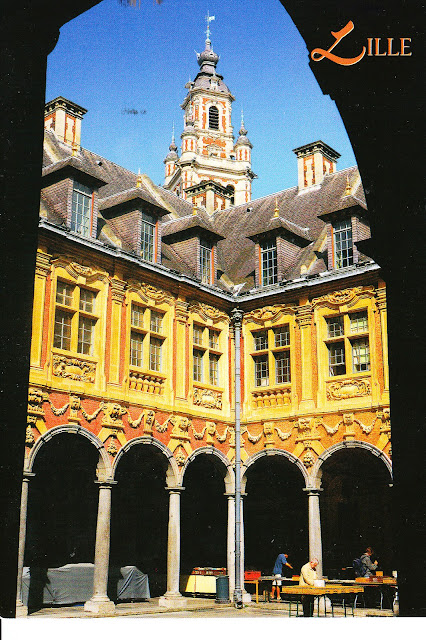 Perhaps Dominique picked up these 2 stamps at the exchange. They are both 50 years old, having been issued in 1967. On the left is a stamp commemorating Stamp Day 1967. The other stamp commemorates the upcoming Grenoble Winter Olympics of 1968. 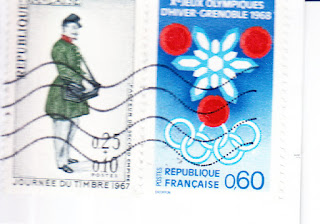 This next card is interesting. It is one from a series called Thailand in the Past. Here we see the Royal Crematorium for King Mongkut at Phra Meru in Bangkok, dated 1869. 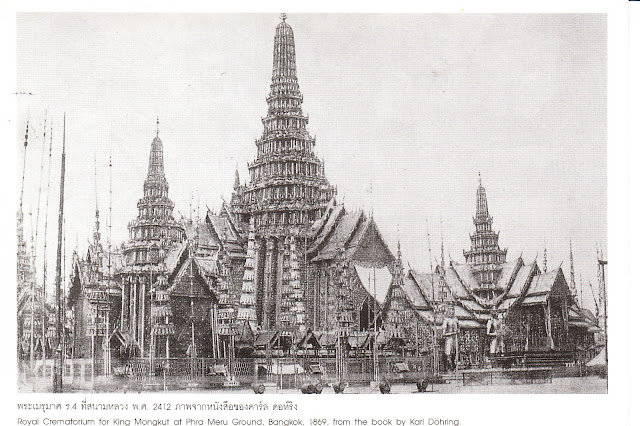 Well that's just about it for this time, much longer than my usual update, but when you get good cards you just want to keep going and share them with everyone.

So let me just end as I started, with another Newfoundland Town Postcard. This time it's Hickman's Harbour. This small scenic fishing village is located on Random Island in Trinity Bay, on the east coast of Newfoundland.
The card shows a fishing boat catching caplin off Random Island. 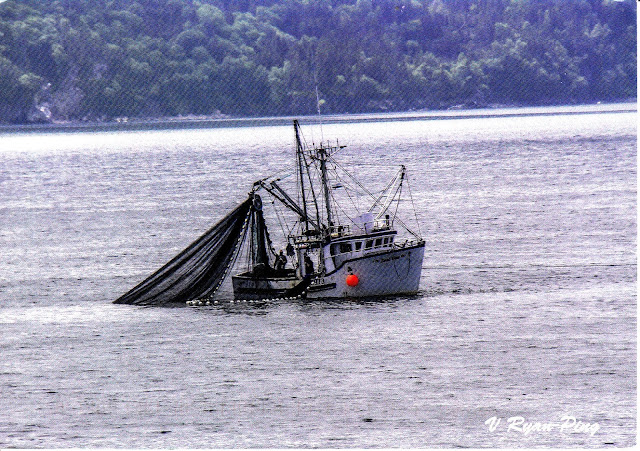 One of the recently popular Post and Go ATM stamps from Canada Post was used on this card. 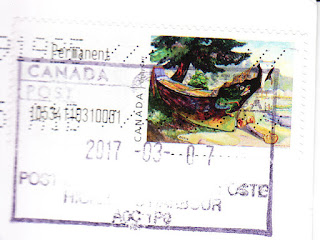 The End  - thanks for all of today's cards go out to The Postmasters at Pacquet and Hickman's Harbour, David, Jean Pierre, Ravindra, Indrit, Gerda, Ivan, Dominique and Jobbo.

Take care and Happy Easter to all those that celebrate and Happy Sunday to those that don't. No mail here in Canada on Monday, as there was none on Friday past, that will make it 4 days without a new card. I don't know how I survive.

Postcards, a Special Cover and a Little Contest

Hello folks, it's been a few days for sure since I last was here. Hopefully, I will make up for that absence with today's cards and other stuff.

Let's start with a card from Norfolk, Virginia, USA. Norfolk has a lot going on, as the home of Naval Station Norfolk, the world's largest naval base. It is also called Mermaid City. The card features a couple of mermaids - mermaids have graced the city of Norfolk for well over a decade. Today mermaids can be found throughout downtown and in neighbourhoods. They can be found in front of businesses, schools, hospitals and even in private yards. 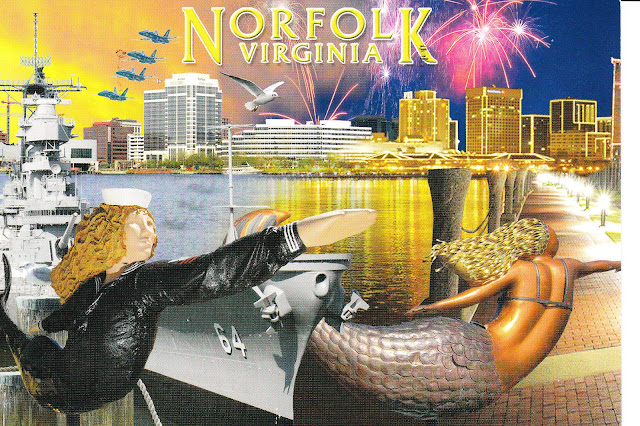 This is a first card from a new reader of my blog. Van stumbled across this site and thought to add a card to my collection. Thanks Van  - hope you keep dropping by. Van used 2 of the National Parks set of 16 issued in 2016. There's also the 2015 issued Additional Ounce Penguins stamp. Note the postmark- it reads CustomHouse Sta, Norfolk. This historic building was built in 1852 and the U S Post Office moved into it in 1857. I don't know if there has been a post office located there all those years since , but if so that would certainly be an achievement. 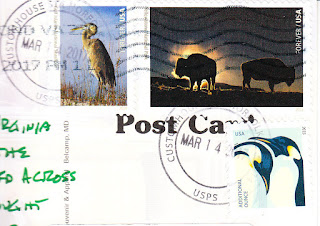 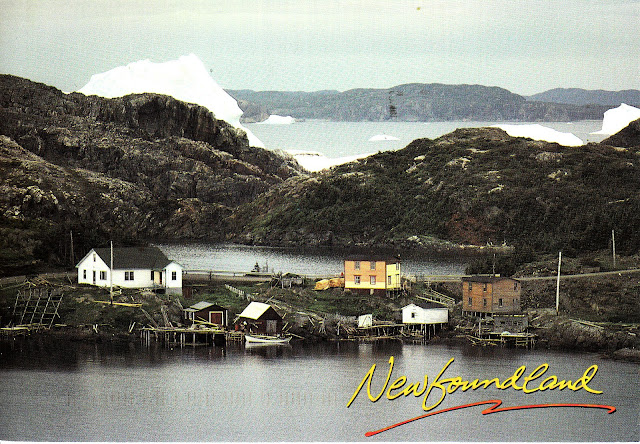 Laura , the Postmaster at Herring Neck used a Queen Elizabeth Diamond Jubilee stamp on this card. 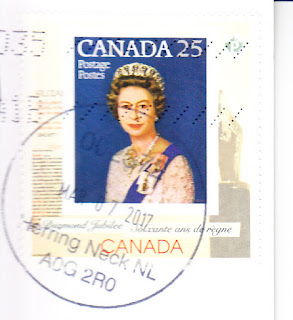 Every now and then , I'll drop a card in the mail to myself, just to see what kind of postmark/cancellation it receives. Just my way of knowing what you guys are receiving from me. This is such a card. A lady on a scooter seeing someone off on the train. 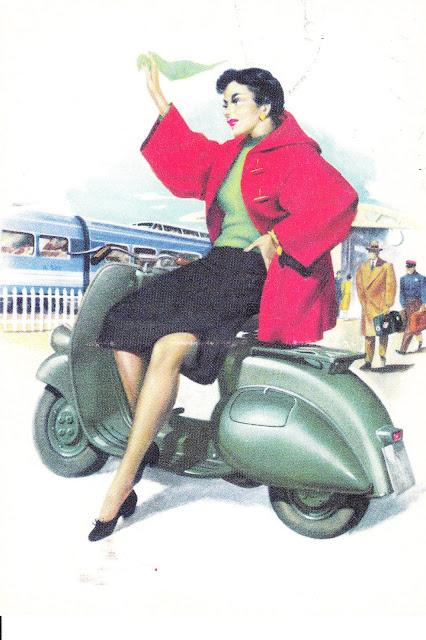 I used 1 of the 5 Group of Seven themed ATM Post and Go stamps issued by Canada Post. This one is by Arthur Lismer. 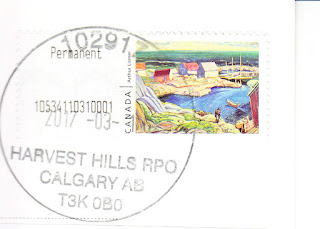 Next is a Special Cover I recently received compliments of Johan.
It celebrates the Comprehensive Economic and Trade Agreement
( CETA ) that was reached between Canada and the European Union. It features pictures of Justin Trudeau, Prime Minister of Canada and Alexander Van Der Bellen, President of Austria. The cover has a French definitive stamp from 2016 and was cancelled at the European Parliament in Strasbourg. 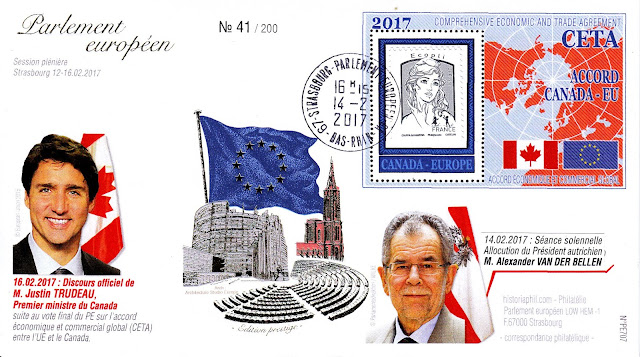 A nice surprise Johan, thanks. Be sure to visit Johan's fine postcard blog at  johan postcards .

It's now time for a little contest as I haven't had one in a while.
Rules - I will be showing a postcard with a female as the subject of the card. The first blog reader who leaves a comment here , with the correct answer to my question, will win a nice surprise.
The question of the day is - who is the subject of the card ? Or who is the lady shown on the card ? First correct comment wins.
And to the winner - Since today is the 100th Anniversary of the Battle of Vimy Ridge, it will be something stamp related to honour this commemoration.

So have a look at the card and get your comment in asap. First correct wins. 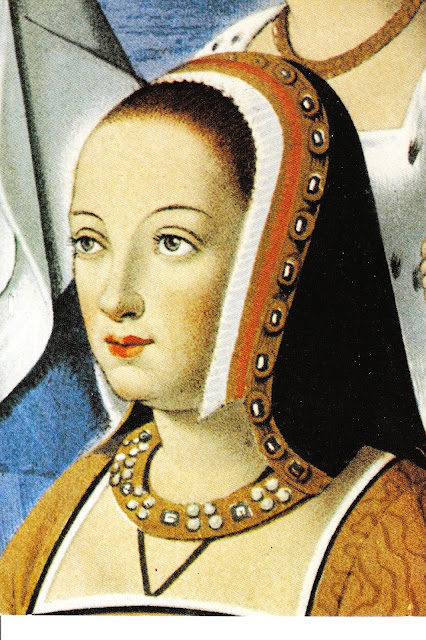 That's all for today. Thanks for cards go out to Van, Laura, and Johan for the cover.
Thanks for reading and hope to have you back again soon.