You Name It Blog

Hello again, well it's a good day to be inside blogging. It's pouring rain and 10 C. Even the ducks on East Lake are hunkered down.

I have a half dozen or so cards to showcase today. Three of them arrived from France and all three were sent by Jean Pierre. So those are the ones I will start with.

Card # 1 - A Century of Aviation in Toulouse. Here you can see a few of the many aircraft types developed by Airbus whose main office is located in Toulouse. 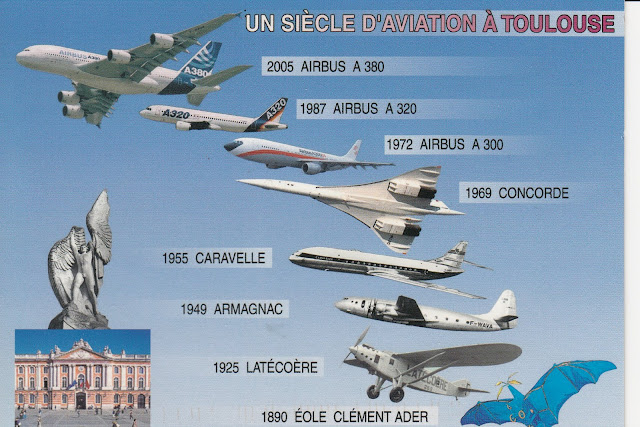 Jean Pierre used a 2019 Commemorative stamp issued on 24 June. It shows the Fountain of the Four Valleys in Marcadieu Square, Tarbes. 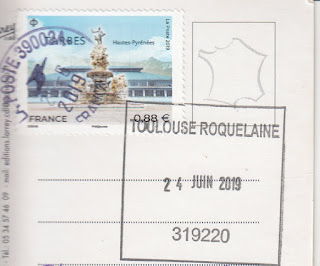 Card # 2 - A fine look at Ingres Museum located in Montauban, a commune about 50 km north of Toulouse. 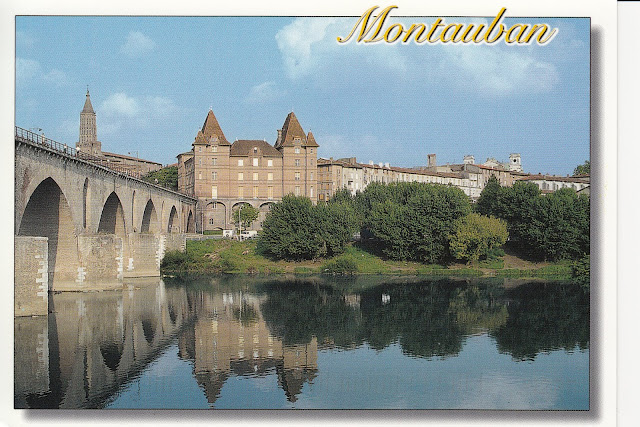 A stamp from 1999 was used on this card. It was issued to highlight Photography of Sculptures. 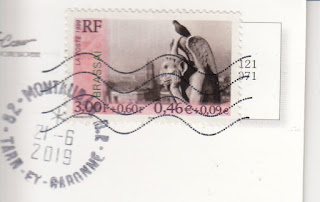 Card # 3 - This one arrived from Poitiers, a city in western France.
It's an evening time look at Notre-Dame la Grande, often said to have the most beautiful Romanesque facade in the world. The church was built in the second half of the 11th century and inaugurated in 1086. It's facade can be read like a book as it tells the stories of the Bible. 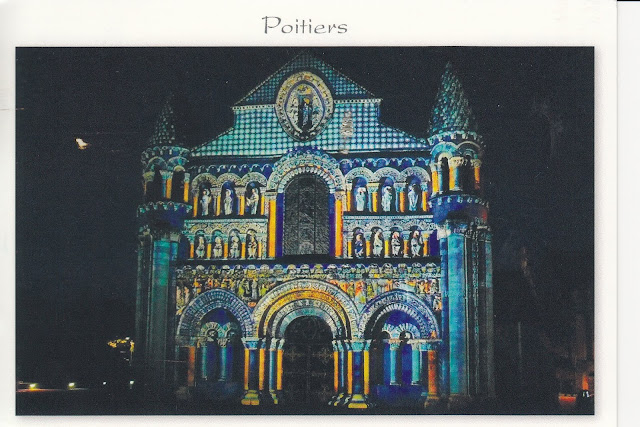 This time we have a Flower Commemorative, from a set of 5 issued in 2019. The set is called Endangered Flora and the stamp shown  features the Violet of Rouen. 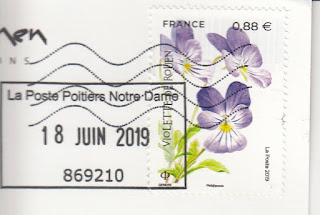 Just a note - That last card was the 5,500th card I have received since I started this collecting gig.


The next three cards are from India, Cameroon and Sri Lanka  , three pretty cool places to get a postcard from .

Card # 4 - Here's the impressive statue of Jain monk Bahubali. It is 57 ft high and carved from a single piece of rock. It was built in 981 A.D. and is one of the largest free-standing statues in the world. When Bahubali became a Digambara Monk he discarded his clothing for the rest of his life. Even today Jain monks still walk around naked. 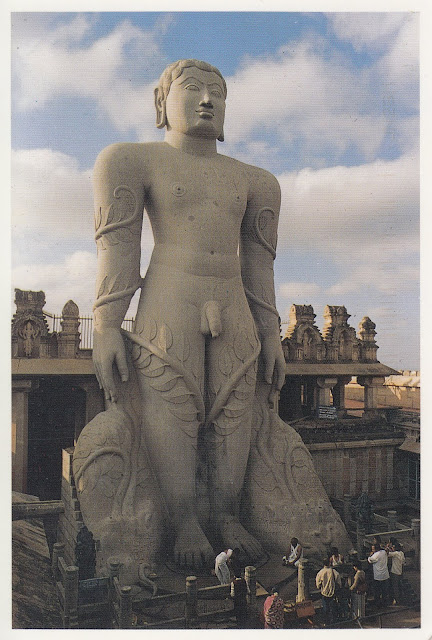 Nagi sent this card along and used a 2018 stamp, 1 of 2 in a Tourism set of Holiday Destinations. 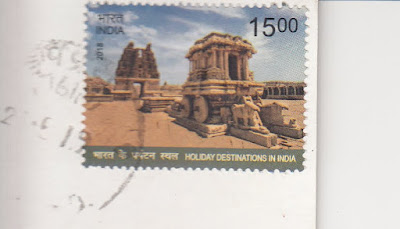 Card # 5 - I don't get many cards from Cameroon, this is only my second. The first arrived back in 2011, so it's good to get another.
Sadly I don't know who sent it, it just says " warm greetings from Cameroon " on the card. You can see three distinct areas of the country on the card, the North, the Coastal area and the West. 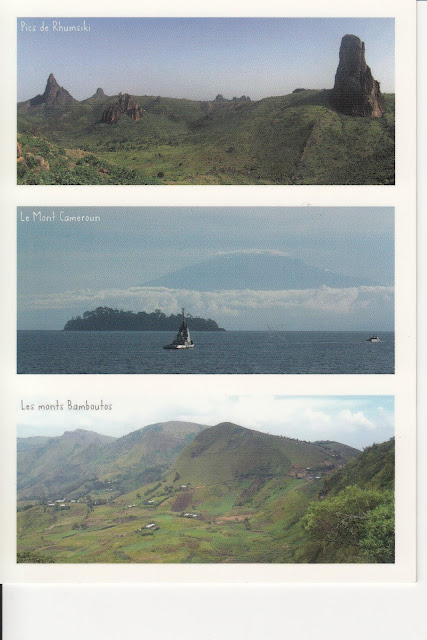 Cameroon is one more of many of the countries that has issued Round Stamps in the last 15 years or so. The stamp on this card is from a set of 2 issued in 2015. It celebrated the Monument erected for the 50th Anniversary of Independence and Reunification. 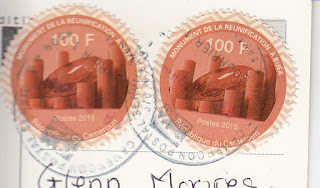 Card # 5 - The last card for today. It's the Tuk Tuk from Sri Lanka. A cheap common mode of Transport in the country. Good for short distances and great open space so one can see all around. 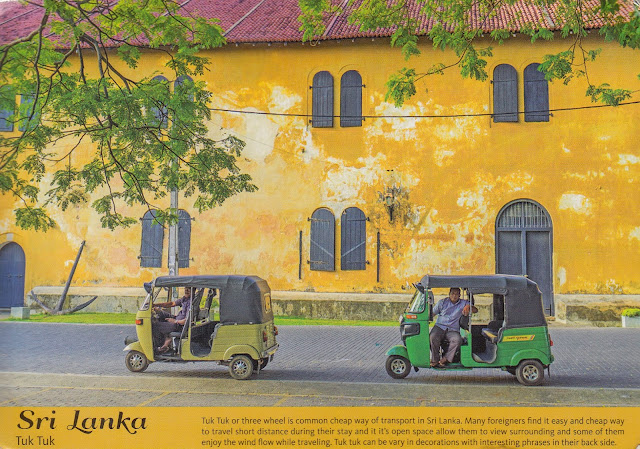 Ravindra used 3 stamps.
The top one  was issued May 17 of this year for the State Vesak Festival. The other 2 are - on the left , from 2013, a stamp celebrating Dr Tissa Abeysekara. He was a actor, director , and filmmaker. The bottom right stamp was issued in 2019 and celebrates International Thalassaemia Day. 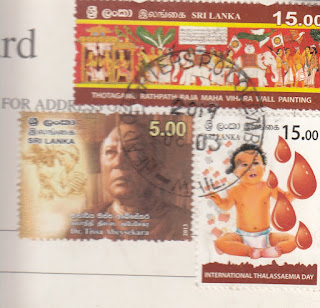 That's all for this time. Thanks for today's cards go to Jean Pierre, Nagi, Ravindra and that someone in Cameroon.

I started this blog yesterday, July 4th , but never finished . It's now July 5th , the rain has stopped and today , this morning , the 107th Calgary Stampede kicked off with over 300,000 people lining the parade route. Lots of horses, lots of cowboys, lots of marching bands, and lots of shouts of  " Ya Hoo " . The start of 10 days of fun, pancake breakfasts, rodeo, bull riding , chuckwagon races and dressing up like cowboys and cowgirls , even if just for a day or two.
Take care.
Posted by Gem from Airdrie at 10:09 AM 1 comment:

Hello again - time for a few more of the great cards I have received lately. But first , a little housekeeping from my last time here - Blog 1010. There were two stamps, 1 from Singapore and 1 from Taiwan that I knew nothing about, Well it seems that Barbara was able to fill in the blanks on these 2 stamps. Here is the info I was missing.

The 40c Singapore stamp is part of a series of 10 stamps themed " Tourism and Culture " from 1990. The stamp in question features Jurong Bird Park.
The Taiwan stamp is themed " Ancient Chinese Engravings" featuring a Bird on a Branch ( a red billed Blue Magpie ) . This 1991 1 NT$ stamp is a reprint of a 1995 stamp that has a value of 2.50 NT$ .

There you have it. Big thanks going out to Barbara.

I'll start today with something not often seen on my blog - a couple of cards from Canada. Yes , I do get a card from  Canada every now and then. This first card is of the Canadian Horseshoe Falls at sunset. Niagara Falls, you can't beat that.
It is the most powerful waterfall in North America, as measured by flow rate. I'm not sure what list if any Niagara Falls is on in regard to Wonders of the World, but let me tell you, when you are standing next to this falls and you feel the mist, and hear the roar, you will know you are are in the presence of A Wonder of This World. I rest my case. 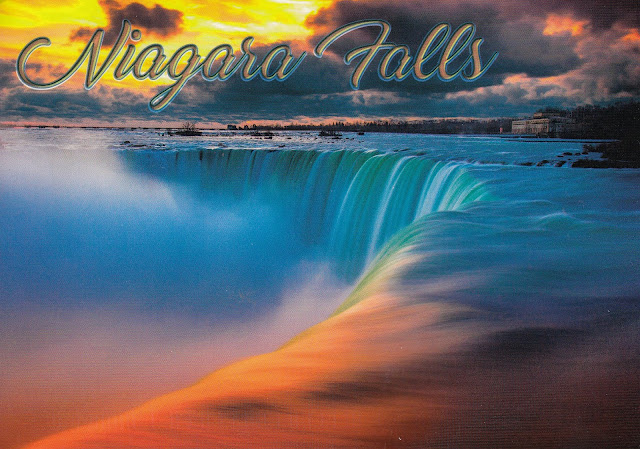 Deb & Bill are the senders of this card. They just had a short vacation in the Niagara Falls area. The stamp is 1 of 6 in the From Far and Wide set issued in January of this year. This one shows Athabasca Falls  in Jasper National Park. This falls is fed by the Columbia Icefield and is 23 metres high. 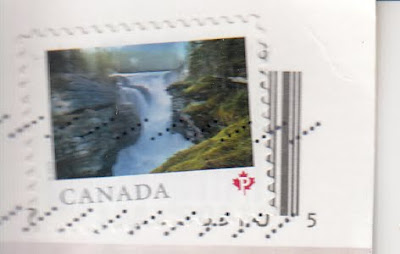 Here's the second card from Canada. It is the Canadian span of the multi- spanned Thousand Islands International Bridge. The American maintained series of 5 bridges connects northern New York with southeastern Ontario. Built in 1937 and crossing the St. Lawrence River , it spans the U.S. Canada border in the middle of the Thousand Islands region. 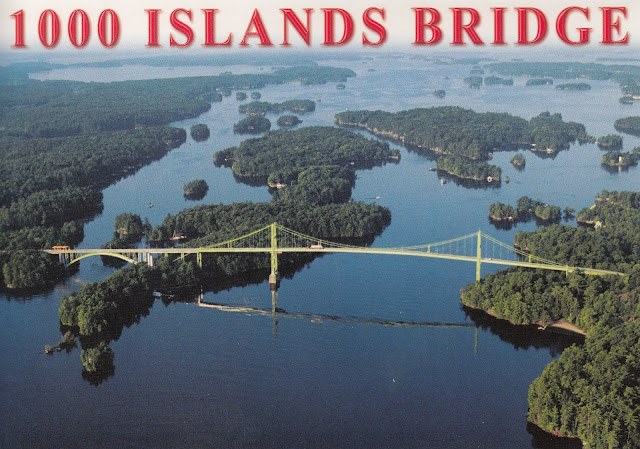 A new reader of my blog ( at least new to me )  sent this card from Kingston, Ontario. Michael used a wonderful display of stamps. The Block of Four are semi-postal stamps and were issued for the 1976 Summer Olympics in Montreal. The other 2 stamps are from 1969 and commemorate the 50th Anniversary of the First Non-Stop Transatlantic Flight in 1919. Michael's card is postmarked 2019-06-19 . He missed the 100th Anniversary of this momentous event by just 4 days as aviators John Alcock and Arthur Brown took off from Lester's Field, St. John's, Newfoundland on June 15th, 1919 and landed in Clifden, Ireland less than 72 hours later.  The landing wasn't perfect by any means but it was a non-stop flight.

Michael , welcome to my blog and I hope you continue as a reader.
My only question to you is " Where do you find old stamps such as these , today ? "


The first non-Canadian card today is from Manila, in the Philippines. It 's a bird's eye look at Roxas Boulevard, the waterfront promenade in the city. It is 7.6 km in length and dates from the 1910s. 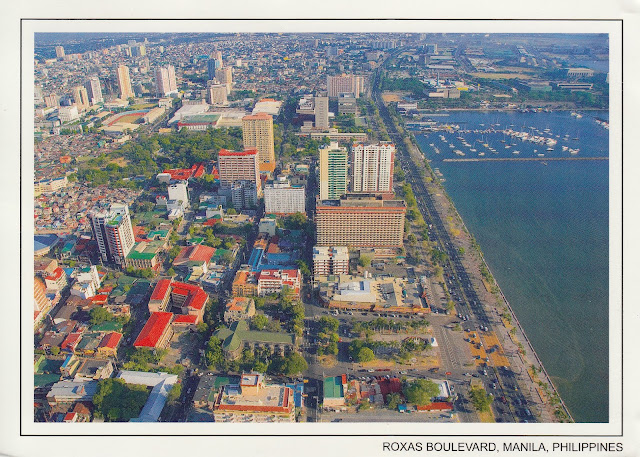 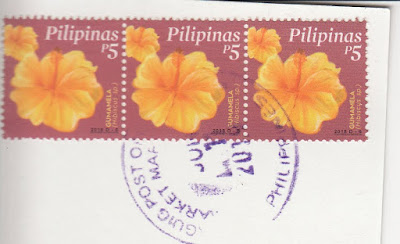 Here's a card from Uberlingen, Germany, an old city dating back to Roman times, on the northern shore of Lake Constance near the border with Switzerland. Dominique's card shows part of the 2 km long promenade that ends at the new health resort, opened in 2003, the Bodensee Therme. The city has established itself as a major tourist destination, especially for those interested in health cures.

The city received international attention in July 2002, but not the kind any city would want. On the night of July 1, 2002 a Bashkirian Airlines Tupolev TU-154 and a DHL B757 collided in mid air over the city at about 30,000 feet. All passengers and crew, a total of 71 on both planes , were killed.  Then a year and a half after the crash, on Feb 24, 2004 the air traffic controller on duty at the time of the collision, was murdered in an apparent act of revenge by a Russian citizen who had lost his wife and two children in the accident. 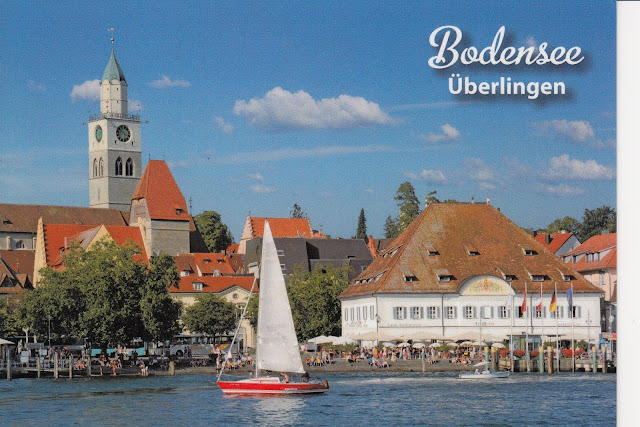 Here's an interjection of a personal note. Yesterday , July 1st was Canada Day. I was too busy enjoying the day to be inside blogging, so let me take this opportunity to wish all my Canadian readers and all Canadians at home and around the world, a very belated HAPPY CANADA DAY. We have much to be happy for .
Let's do Tim's sometime .


I have two Russian cards to have a look at next. I often complain about the same old Russian stamps arriving on cards. Not the case this time. Both cards arrived with large and great looking stamps.

An impressive looking bridge , all lit up at night is the focus of this first card from Russia. I don't have any idea of the location of or the name of this bridge. Perhaps someone knows and will leave a comment. 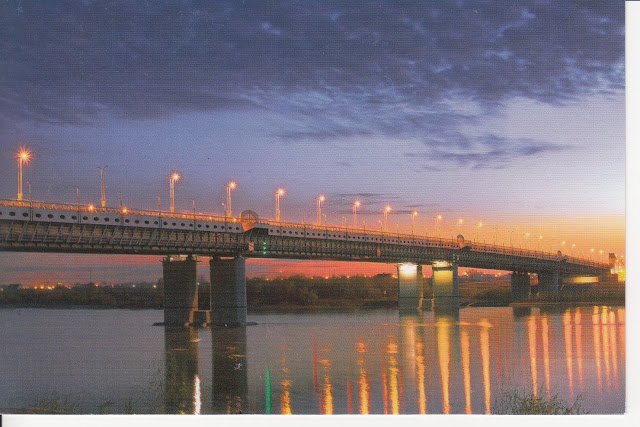 Ludmila used 4 outstanding stamps on her card. Let's start with the top left stamp. It is 1 of 3 in a set issued in 2004 showing parts of or items in the Amber Room of the State Museum. Also to be noted is that this set is embossed or has a raised pattern.
The bottom stamp is a Europa Bridge stamp from 2018. The other two stamps are part of a set of 4 Bridges stamps issued in 2008. 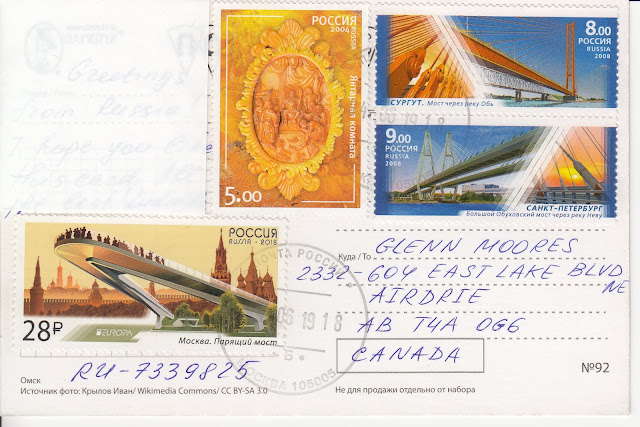 The second card from Russia arrived from Saint Petersburg. Here's an old time train engine for all the train / railway card people out there. 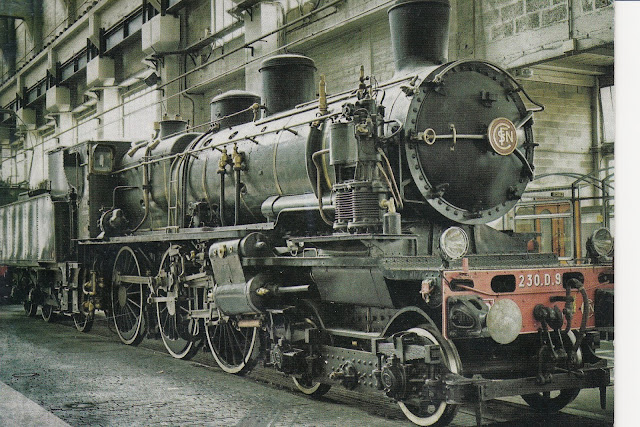 Elena and Julia sent this card with a stamp from 2019, commemorating the 300th Anniversary of the Discovery of Marcial Waters by Peter The Great in 1719.

So ends another blog update. Thanks for cards this time going out to Deb & Bill, new reader Michael, Jobbo, Dominique, Ludmila and Elena & Julia. See you again soon.