A New Country Postcard and a Few Others

Well, it's been a while, a month in fact. Last update was Feb 28th and now it's Mar 28th. As some of you know, I've been away , away for 3 weeks actually. My Lovely Teena and I were on our 7th cruise, this time to the South Pacific. We had a week in Sydney, Australia and then a 2 week cruise. We flew from Vancouver to Sydney , then a week later boarded the Oosterdam and sailed to New Caledonia, Vanuatu and Fiji. That's 4 new countries for Teena and I, bringing our total to 31, not bad at all, but nowhere near the Travelers' Century Club requirement. Our cruise didn't exactly go as planned, the itinerary was changed a couple of times, we missed getting into 3 ports due to Cyclone Pam. We missed one in New Caledonia, one  in Fiji and one in Vanuatu. We were supposed to dock in Port Vila, Vanuatu on Friday the 13th and we all know now that that's the day Pam hit there causing such widespread destruction. Skirting around and avoiding Pam as we did, certainly made more sense then trying for ports that we now know were unsafe. As I always do after a cruise, I'll post "Cruising Thru Postcards 7 " when all or most of the postcards mailed on the cruise have arrived . Be sure to look for that one.

Of course after 3 weeks away, my mailbox was kinda stuffed with postcards, so I have lots to work with for a while. Included in these cards was a new country, the first for my collection since Jan of 2014. Country or stamp issuing entity # 261 is Guinea. Guinea, officially the Republic of Guinea, is a country in West Africa. Formerly known as French Guinea, it is today sometimes called Guinea-Conakry to distinguish it from its neighbours Guinea-Bissau and Equatorial Guinea. Guinea has a population on just over 10.5 million and is comprised of 245,860 square kilometres. My first Guinea card shows a local lady, described as a castanet player. Here it is . 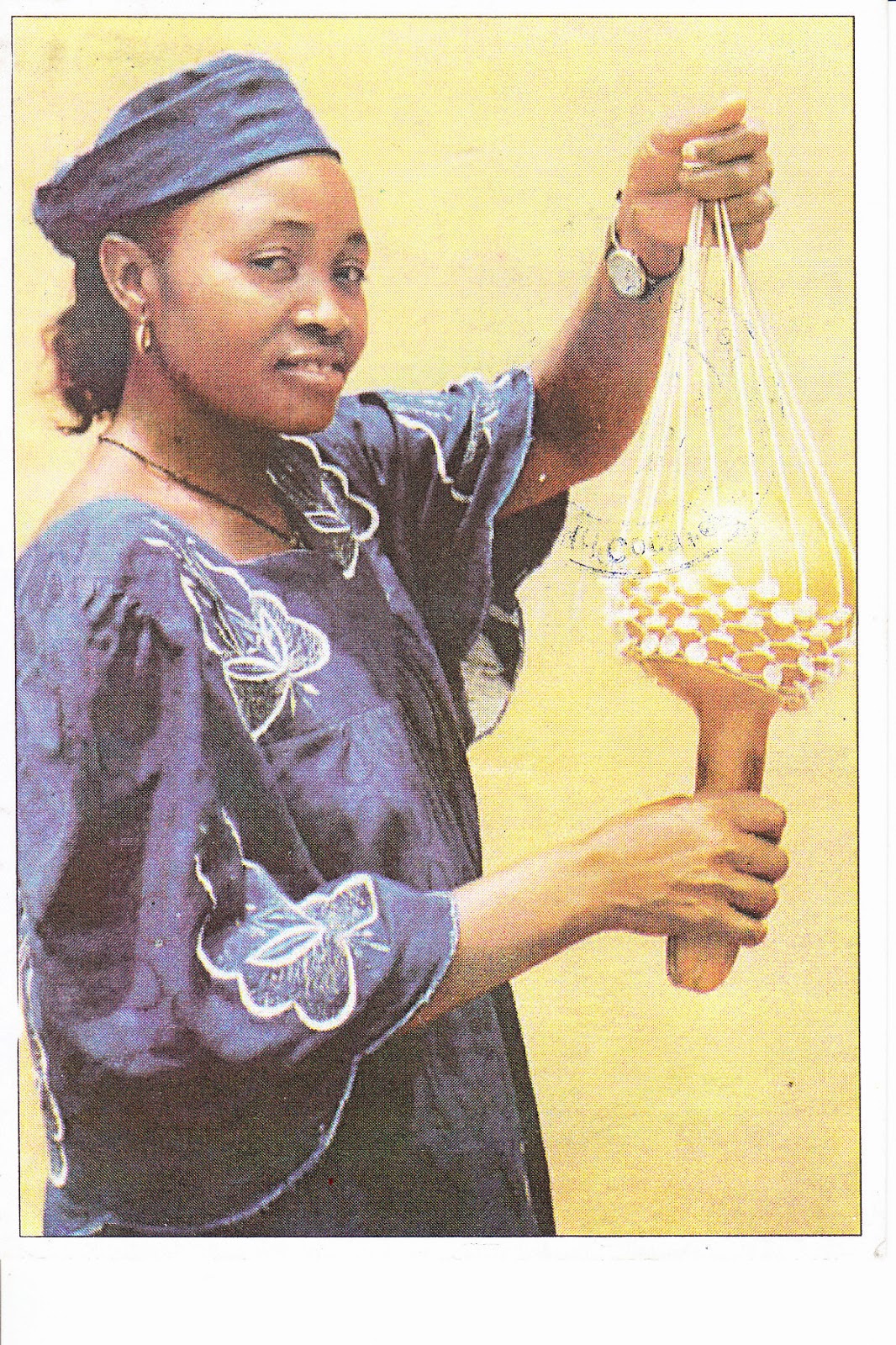 This card is from Madeleine, the only Postcrosser in Guinea, but it's not an official Postcrossing card. Madeleine wrote that she stumbled upon my blog and saw that I still needed a card from Guinea.
So with the help of her sister in Switzerland, I now have a card from Guinea. Madeleine's card was sent back in Dec of  2014 and wound its way through Switzerland before arriving in Canada 3 months later. Sent from the city of Kissidougou, it arrived with 2 wonderful, and colorful stamps . On the left is a stamp celebrating 50 Years of Diplomatic Relations between Guinea and the Peoples Republic of China. On the right is a stamp from 2008 honoring the Africa Cup. It is from a set of 8. 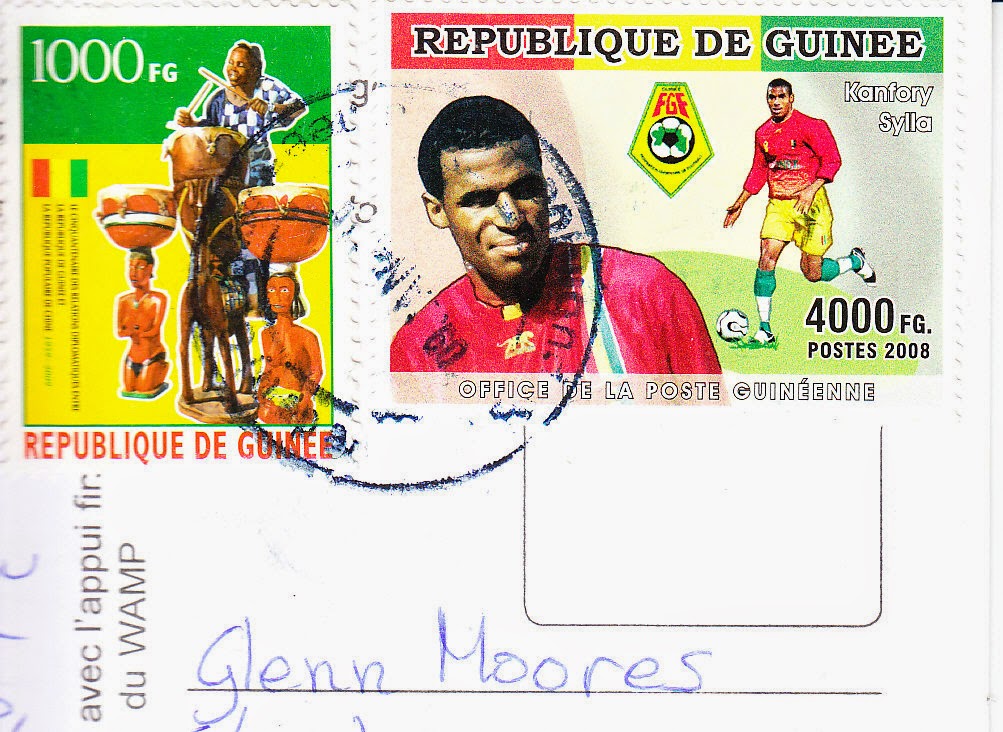 Now with Guinea in the box, I have just 12 countries or entities left , so just in case you're jetting off soon  to any of these obscure places , here they are : Australian Antarctic Territory, Central African Republic, Congo ( Democratic Republic ) , Djibouti, Guinea-Bissau, Liberia, Niuafoóu, Penrhyn Island, Sierre Leone, South Sudan,  Tokelau Islands, and of course Transniestra. So come on all you intrepid travellers and Travelers' Century Club members and 1.3 million Virtual Tourists out  there who seem to be going everywhere, drop me a postcard from wherever and hopefully it'll be one of the twelve listed above.


Next up is a card from Georgia, the country not the state. Georgia is a country in the Caucasus region of Eurasia, bounded by the Black Sea, Russia, Turkey, Armenia and Azerbaijan. It's capital is Tbilisi. This is my first card from Georgia in a couple of years. I used to get cards from there regularly but for some reason they dried up. My card shows a number of houses and the 13th century Metekhi Church built rather precipitously along the banks of the Mtkvari River in Tbilisi. 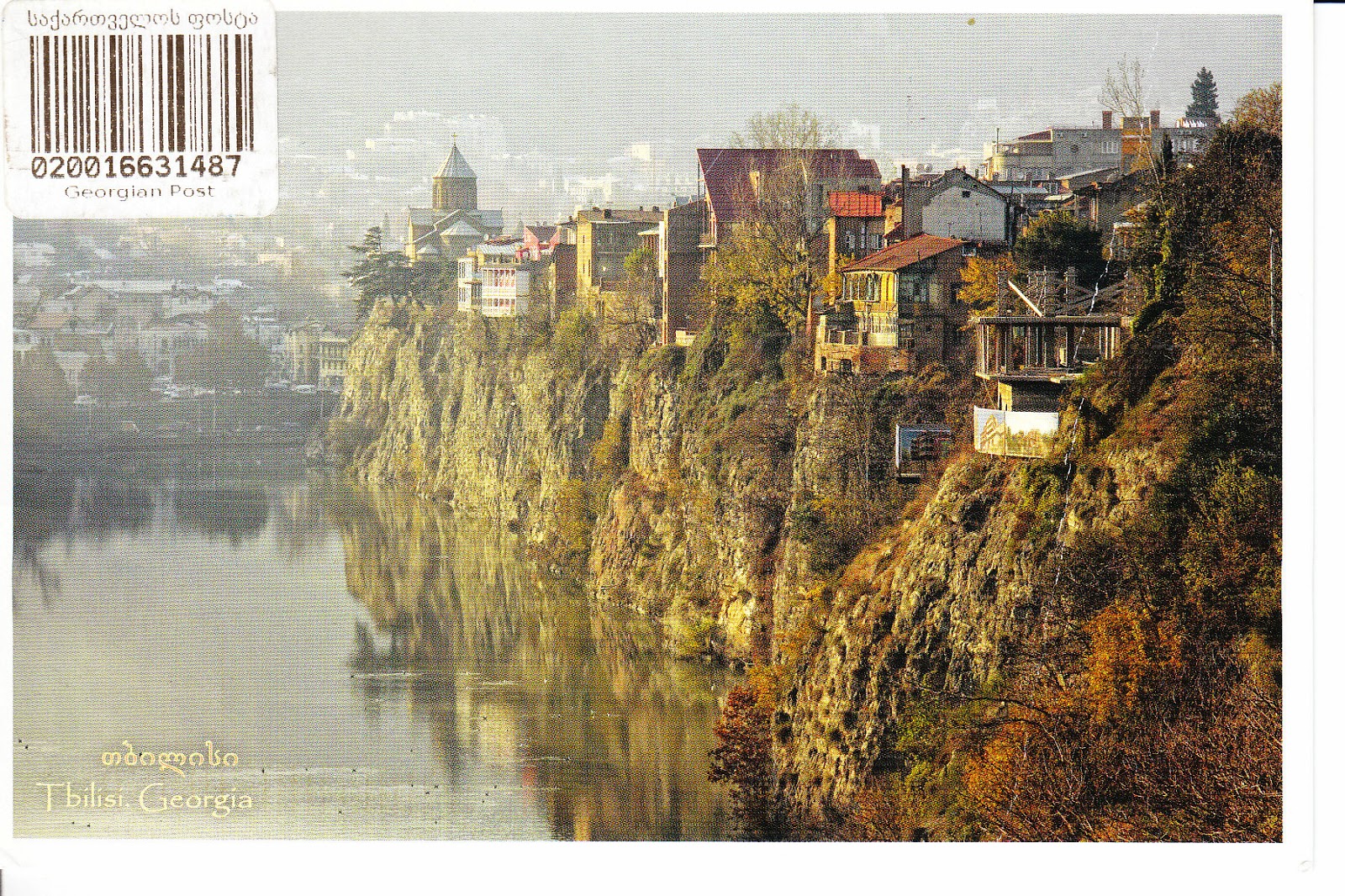 Meelis used 2 stamps from the 2013 Europa  Postal Transport issue. He also used a neat Aviation related Air Mail sticker. I think if more countries used Air Mail stickers like these, there would be more people collecting them.

Now for a little Singapore. First is a card sent by my brother Dale. He's on a 35 day cruise in that part of the world. His card gives us a look at the Singapore City skyline featuring a couple of Singapore icons - Marina Bay Sands Resort Hotel , Gardens by the Bay and The Flyer. 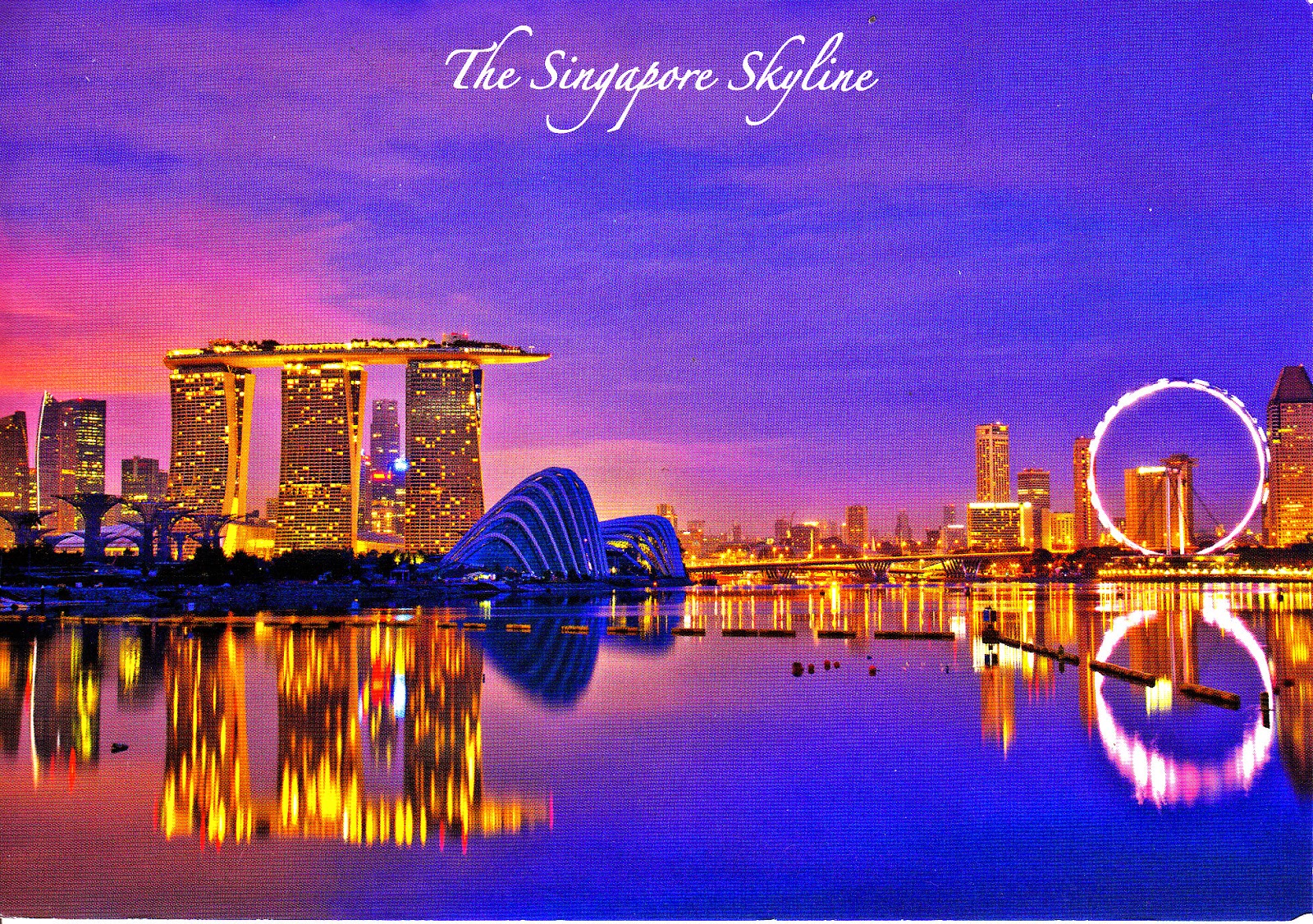 Dale used a recent 2014 stamp. It's 1 of 4 in a set highlighting Vanishing Trades, the one shown is a Garland Maker. 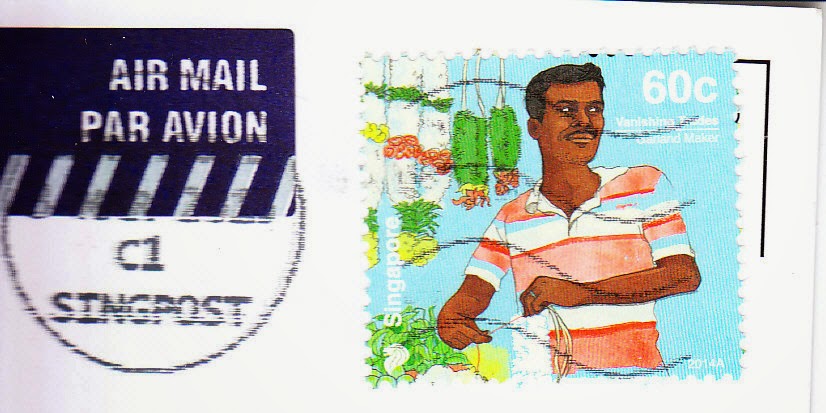 My 2nd Singapore card showcases the Grand Prix Season in Singapore. The 2015 Formula 1 Singapore Airlines Grand Prix will be held 18.19.and 20 Sep at the Marina Bay Street Circuit. 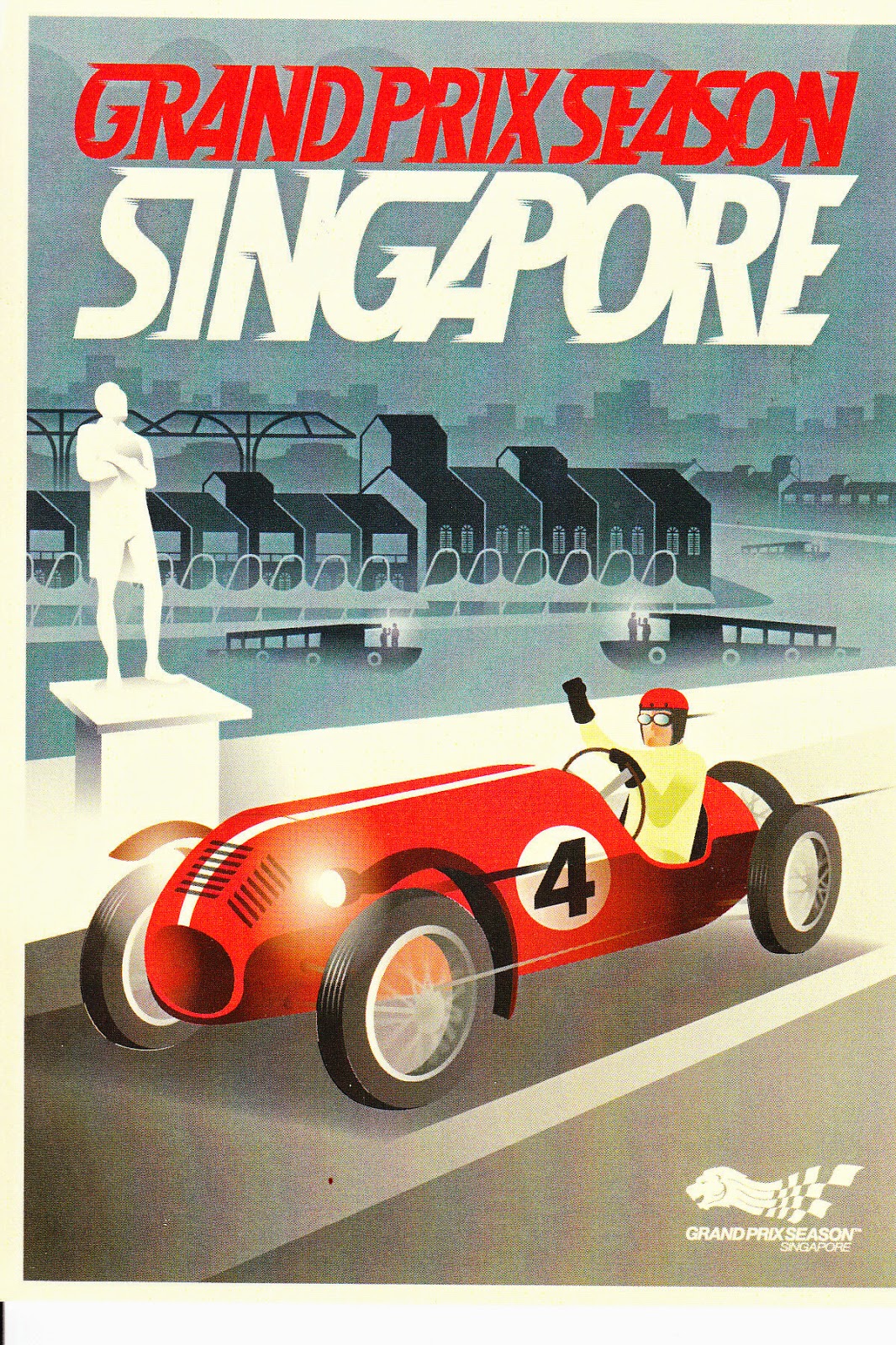 Jean Pierre used 2 great stamps from 2010. On the left is 1 of 10 in a set featuring Trees. On this stamp is a Rain Tree. On the right is a stamp featuring a Common Birdwing Butterfly. It is from a set of 4. 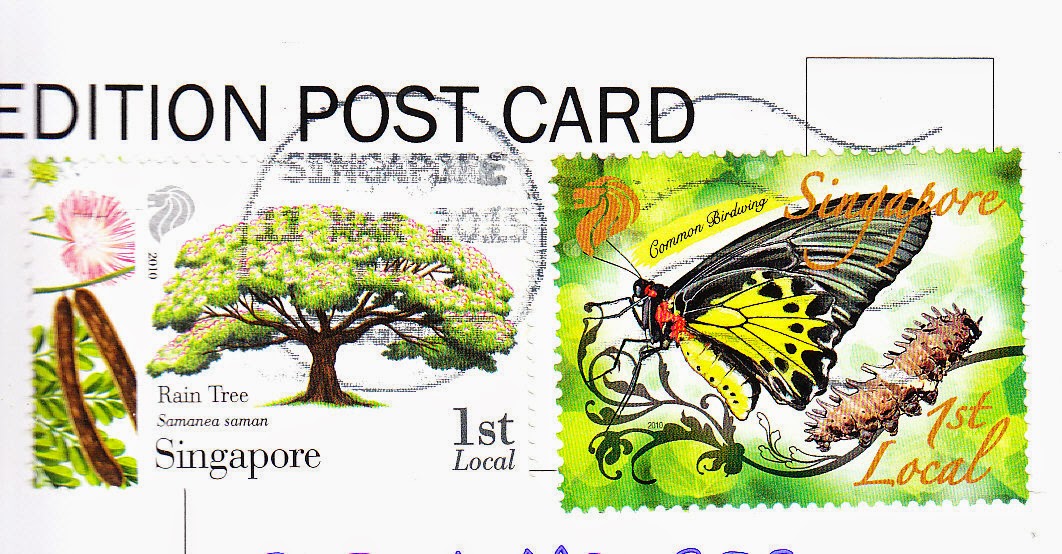 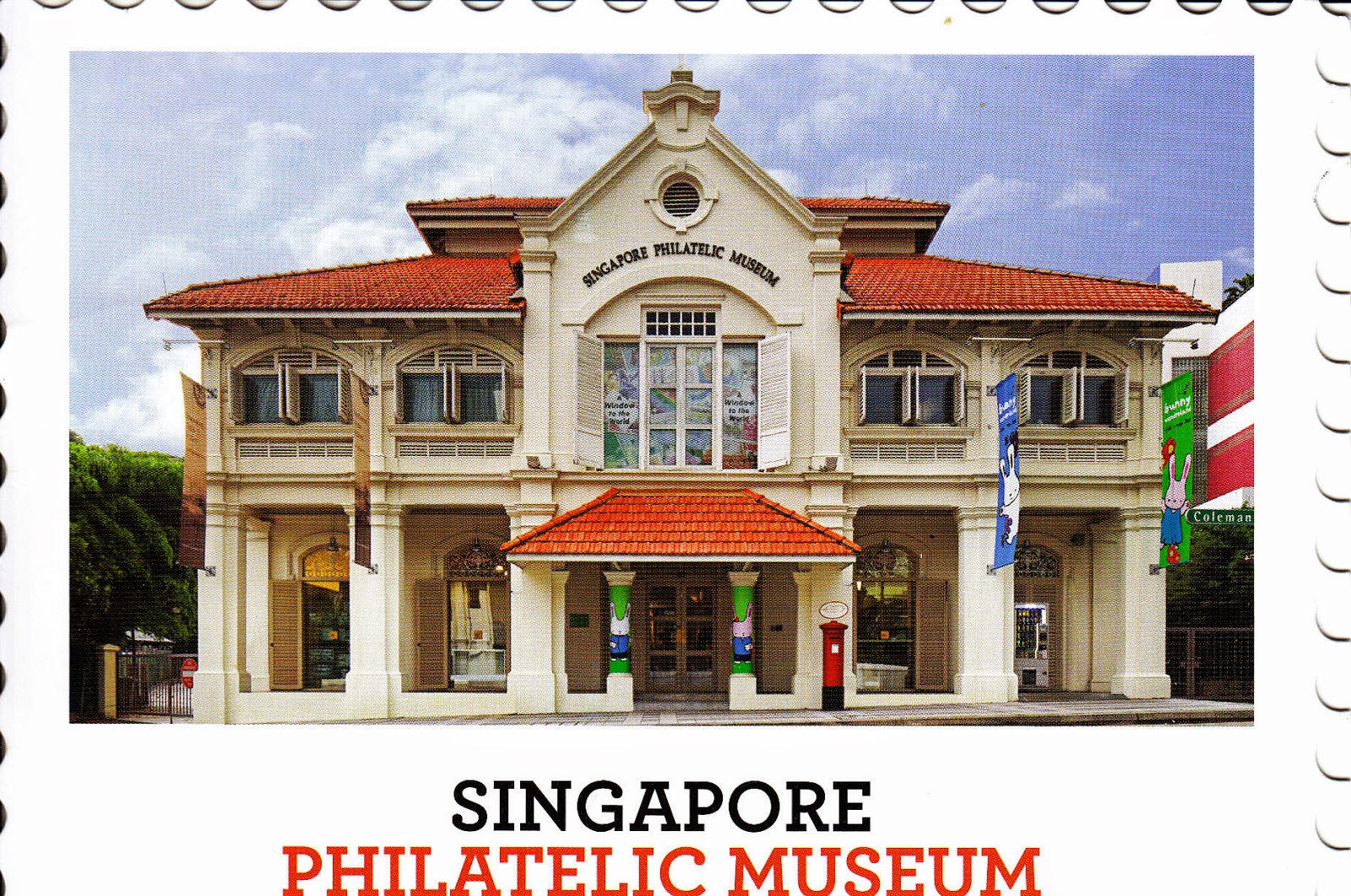 David used 3 of the Vanishing Trades stamps that I mentioned earlier. Here we see a kacang puteh seller , a lantern maker and the garland maker again. 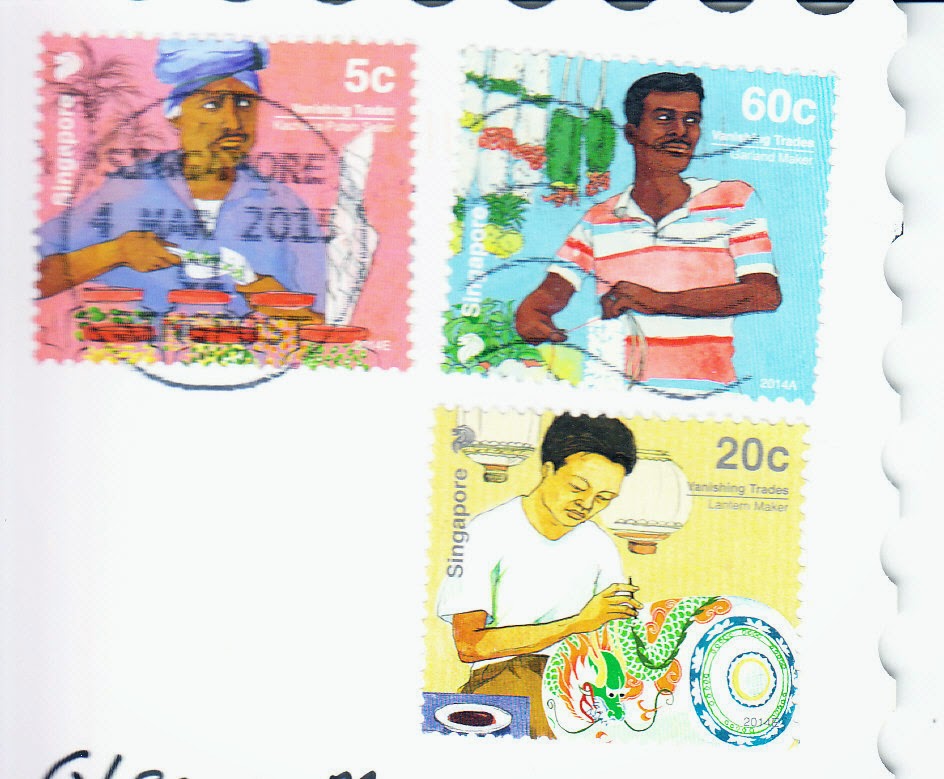 One more card for this time and it comes from Bangkok, Thailand. It shows the Royal Barge gliding pass the Royal Palace towards the Temple of Dawn during a ceremonial Procession. The Royal Barge Suphanahongse was built in 1911. This 46-meter craft was carved from a single trunk of teakwood, and was launched 13 November 1911. There is a golden pavilion on board to house the king and his immediate royal family. The World Ship Trust, in 1992, named the Royal Barge Suphannahong a Maritime World Heritage. 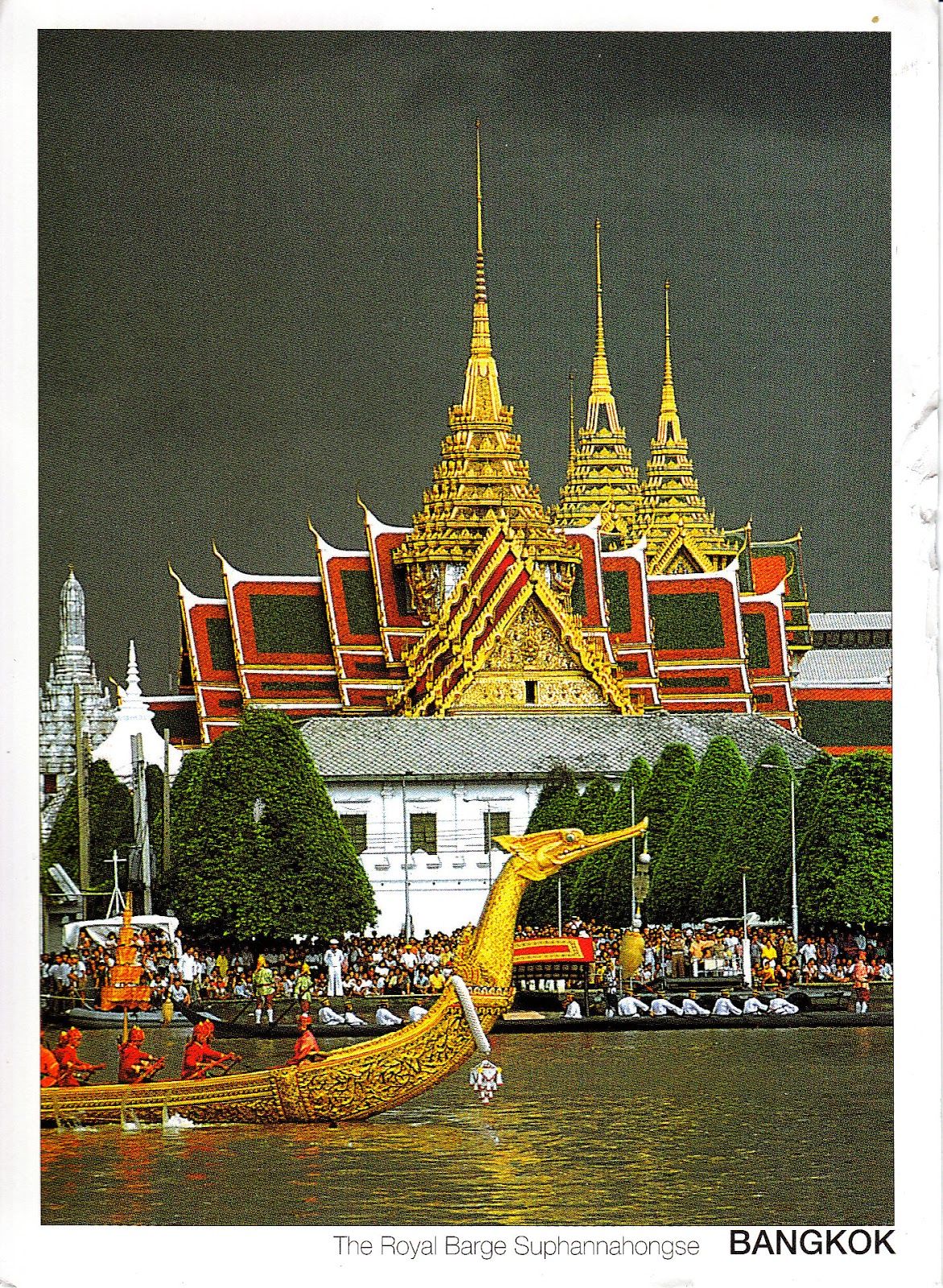 Jean Pierre used a number of stamps on this one. On the top are 2 stamps celebrating National Children's Day 2015. The blue King definitive is from 2010 and the flag stamps are from 2013. 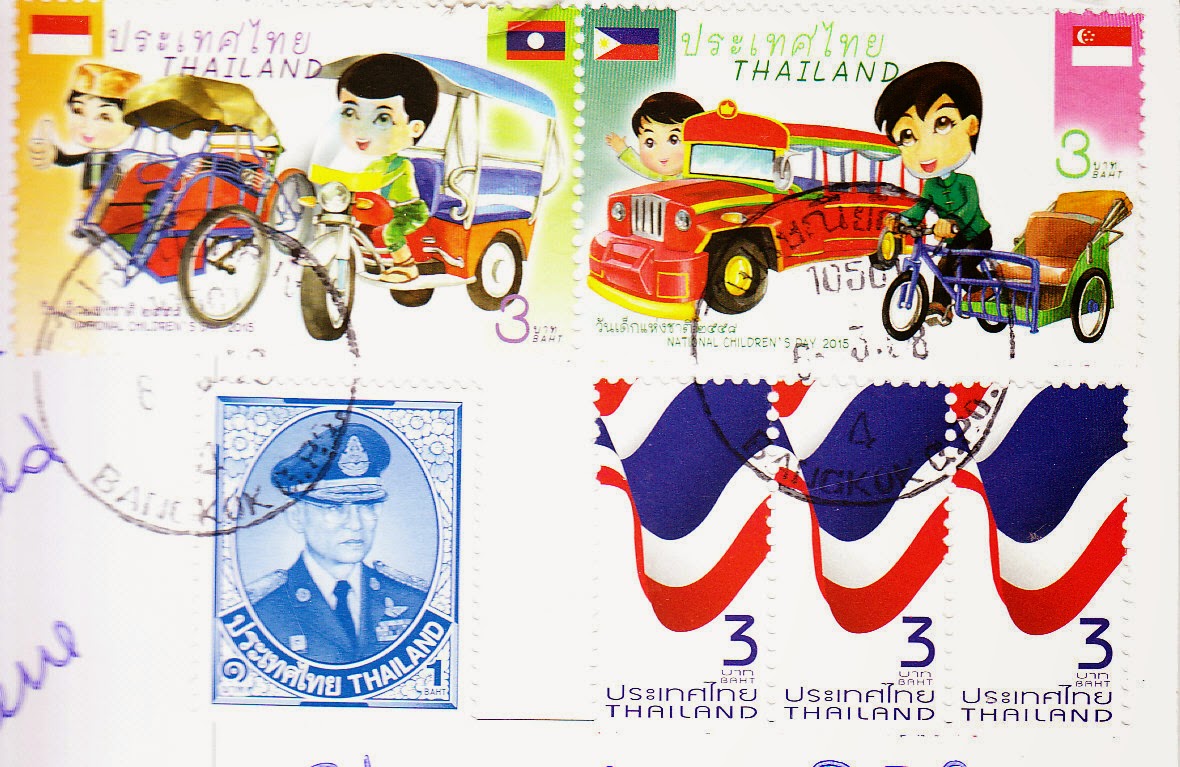 That;s the cards for this time. Thanks for them go to Madeleine and her sister, Meelis, Dale, Jean Pierre and David. Great cards and great stamps . Drop by again, it's certainly won't be another month before I'm here again. Just a day or two. See you then, Don't forget, if you want to leave a comment , go for it, they are always welcome.
Posted by Gem from Airdrie at 1:05 PM 3 comments: