Attention to all readers of Gem's World Postcards

season. I will return with all new postcards and stamp updates starting around the 7th of January 2016.

I want to take this opportunity to wish all those that celebrate this coming holiday season, a Very Merry

Christmas indeed. And, if you are not celebrating , have a great couple of weeks anyway. Cheers.

Well what can I say ? The title of this post says it all. It's another of those wet, rainy, windy, dreary days.
Only good for postcards and stamps. So that's what I write about., and that's why you're reading. So, here they come.
I want to start this update with this spectacular British Airways Concorde postcard. It's aircraft G-BOAF , it was aircraft  # 216 in the BA fleet and the 6th Concorde in the fleet. Her maiden flight was on 20 April 1979 and she was delivered to British Airways on 9 June 1980. This aircraft's final flight was on Now 26, 2003 and that was also the final flight ever for a Concorde. 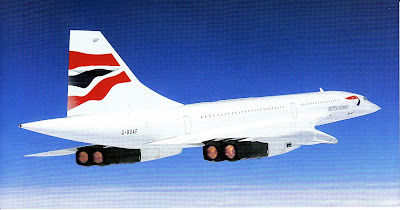 This is another card from Jean Pierre. While the card is a great souvenir of Concorde, the special cancellation on the stamp is another special aviation related item. First the stamp - it is 1 of a set of 6 issued in 2012 showing Charles Dickens characters. This one is Captain Cuttle from Dombey and Son. . Now for the cancellation. It celebrates the Farewell To Flight ofRoyal Air Force Avro Vulcan Bomber XH558. This Vulcan was the last airworthy aircraft of its type still flying. It flew a national tour on October 10th and 11th of this year. Then a final flight before it was grounded was flown on October 28, 2015. XH558 was nicknamed The Spirit of Great Britain and is now preserved in taxiable only condition at Robin Hood Doncaster Sheffield Airport.  Just exactly what the 4 Dec'15 date signifies, I'm not sure.
On a personal note - back in the late 1970s I lived in Goose Bay, Labrador, home of Goose Air Base. The Royal  Air Force had a Detachment stationed there and as a result I often saw Vulcans up close, so to speak. To this day , Vulcan XL361 can be seen  in a static display in Happy Valley - Goose Bay, as the town is now called. 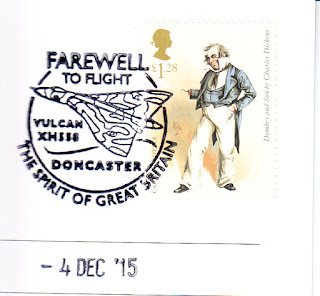 My next card is from Solnechnogorsk, Russia, 65 km northwest of Moscow. The card is of a Lady and her Horse. A Russian lady and an Arabian horse, I've been told. 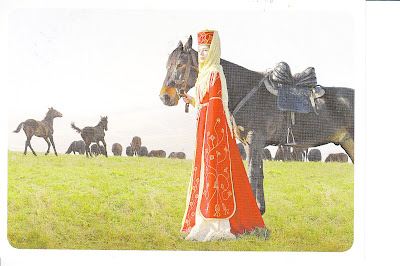 Svetlana used a nice large stamp from this year. It commemorates 150 Years of the Leningrad Zoo.

Here's the final card for today. It comes from Tel Aviv, Israel and is a 1940 view of the Valley Train. The Valley Train was a historical railroad in Palestine running along the Jezreel Valley. Inaugurated on October 14, 1905 it operated until 1948. 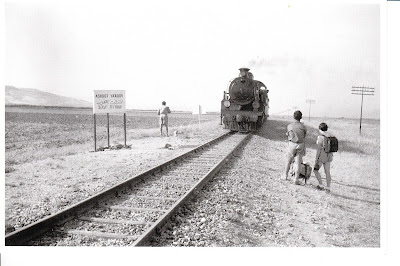 Daniel used a nice selection of stamps on his card. There's a couple of small definitives on the left. In the middle is a stamp commemorating the Israel Museum, 1 of 3 in the set, issued in 2015. On the right is a stamp also from 2015 from a Rivers set. This one shows the Kziv River. 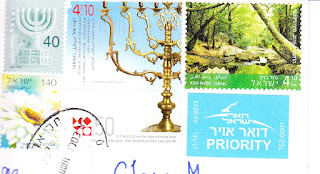 There you have it. Another update completed. Thanks for cards go to Jean Pierre, Daniel and Svetlana. Thanks for dropping by, come back again soon.
Posted by Gem from Airdrie at 9:28 PM No comments:

I wrote a short time ago that it was raining , pouring I believe I wrote, well ditto again today. Pouring rain, and quite windy - so another good day to be inside blogging postcards and stamps. So let's get to it. First up is a card from Thailand. It shows an old time picture of some folks from Siam. Then on the top is the first set of stamps of Siam, issued on August 4th, 1883. These stamps are Scot #s 1-5 and are valued at $116.00 USD in Mint , unused condition. In Used condition they are valued at $117.00 USD. The black stamp on the far left, Scott # 1 is valued at $10.00 Mint or Used. Not a bad price actually. Now I have a collection of Scott # 1 stamps from around the world, but I don't yet have the  one shown here. Maybe someday. Now, here's the card. 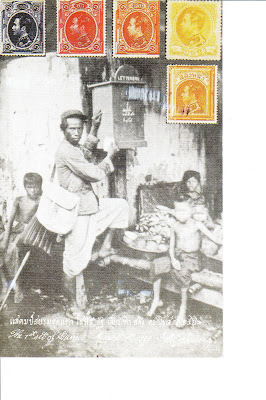 This is another card from Jobbo. His first stamp , on the left, was issued in a set of 4 for the Bangkok '83 International Stamp Show. All  4 of them are mail related.  The one shown has a number of mailmen collecting  mail from a postbox at different times in the past. The stamp on the right is 1 of 10 in a definitive set , all showing Coastal Landscapes.

My second card is from China. On it we see the Xiaoshang Bridge at Linying, a county of Henan, China. 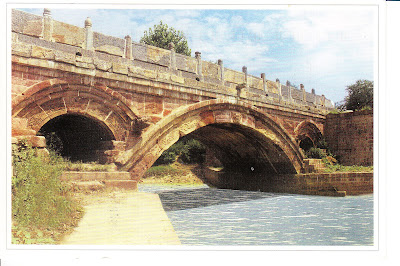 This is a prestamped postage paid postcard, sent by a PostCrosser over that way. The prepaid  postage  shows an image of the bridge, exactly as on the front of the card. The other stamps, the 3 on the left at least, are from 2014. They are from a set of 4 called Network. 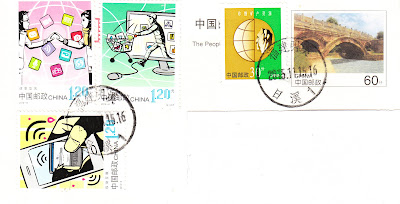 This next card also is of a bridge, this time one in The Netherlands. It is the area of the intersection of the Keizersgracht and Leidsegracht canals. The Keizersgracht is also known as the Emperor's Canal, named after Emperor Maximilian of Austria. It is 31 meters wide and digging started in 1612. In winter it becomes a skating rink , much like the Rideau Canal in Canada's capital city, Ottawa. There are certainly a few interesting places along the canal. There is the three Greenland Warehouses, dating from 1620. These are the only warehouses in the city with step gables. There is also Rode Hoed or Red Hat, dating from 1629. Let's not forget the House with the Heads, built in 1622. It's named after 6 heads that stick out of the gable and they represent Apollo, Ceres, Mercurius, Minerva, Bacchus and Diana. There is also HomoMonument - commemorating the 70,000 gays and lesbians who died in Nazi concentration camps during World War II. Lots to see along there for sure.
The Leidsegracht Canal , named after the city of Leiden, was built in the second half of the 17th century and runs parallel to Leidsestraat. This may not be the most interesting street, it is however , it is the most well known street in all Holland.
This seventeenth-century Canal Ring area was added as a UNESCO World Heritage Site in 12010. 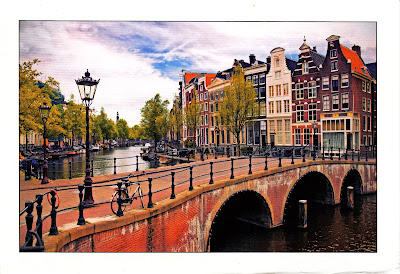 A PostCrosser by the name of Els sent this card along. The stamp, a new one to me ,  was issued this year and  is an international rate stamp.It is  one of six in a souvenir sheet entitled  " Borderless Netherlands- USA Popculture." 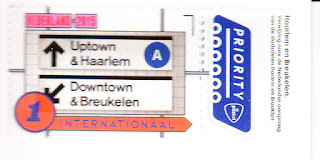 Now to end  this update , here's a little pin-up from Russia. The card says her name is Julia - I guess that is supposed to explain it all. 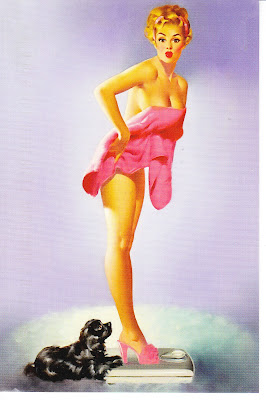 Anna used a large triangle shaped stamp that was issued this year. It is from a set of 4  showing Porcelain Tiles . Anna also used 1 of those Animal definitives which have been on the go quite a while now. 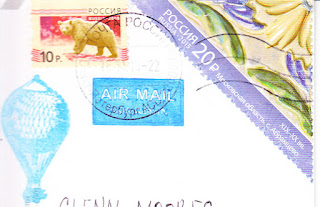 Well there you have it. Another one in the books. Thanks for cards go out to Jobbo, Els , Anna and an unknown in China. Take care and drop by again.
Posted by Gem from Airdrie at 7:35 PM No comments:

It's December, I Know

It is December , the 6th of in fact, and I'm just getting the first  blog update up and running. As I said a short time ago, cards have been a little scarce of late. I received a number of cards over last week so I figure it's time. It's also a good time to be inside, it's pouring rain today, just as it did yesterday. The forecast for this coming week calls for rain, rain and more rain. Perhaps I should ask Santa for a boat this year.

Now it's on to postcards. Let's start it of with a card from France. It shows Les Invalides, a complex of buildings in the 7th arrondissement of Paris. France held its national day of mourning at this site to remember the 130 victims killed in the recent terrorist attacks in the city. It was the first time France honoured civilians,  in this temple to the French military. 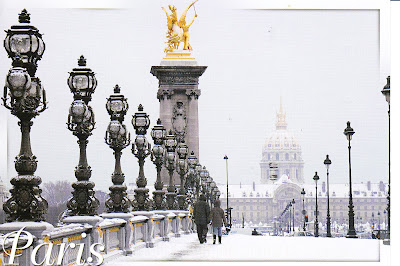 Dominique used a 2015 stamp issued for the Spring Philatelic Exhibition in Paris.

Today's second card arrived from Moscow , however it actually shows a landing at Helsinki Airport in Finland. Helsinki - Vantaa Airport is the main international airport in Finland, with about 16 million passengers using it in 2014. Located in the city of Vantaa, it serves as the hub for Finnair. The airport is served by 27 scheduled airlines, 11 charter airlines and 11 cargo airlines. Vantaa Airport was originally built to accomodate the 1952 Summer Olympic Games in Helsinki. 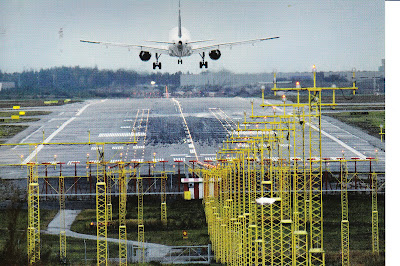 Lena wrote that she bought this card while travelling in Finland. She used two fine, large stamps, one from 2007 and one from 2012. The upper left stamp was issued to commemorate Khakasia's affiliation with Russia. The Russian republic of just over 500,000  people is located in the southwestern part of Eastern Siberia. The large whale stamp is from a set of 2.
Lena also saw fit to attach an old USSR aviation related stamp. She wrote that she found it in her father's stamp collection. It was issued in 1969 and shows an IL-62 aircraft. Hope her Dad is not one of my blog readers. 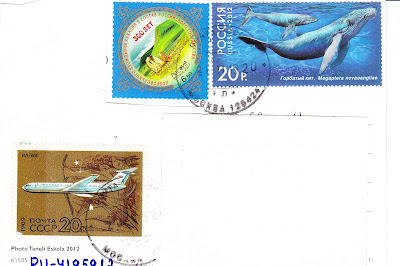 Next we have a card from Portugal showing a typical yellow trolley  in Commerce Square, one of the most majestic squares in Lisbon. 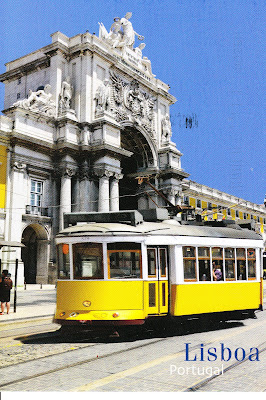 Maria posted this card in Estoril, a coastal town of about 27,000 with a great beach. My Lovely Teena and I visited the area way back in 1978. I guess lots have changed since then. Maybe it's time to go back.
Maria used a stamp from a set of 3 that was issued in July of this year. The set featured traditional Portuguese boats. Shown on the stamp is a boat called Canoa da Picada. The stamps are part of a common issue of the Postal Union for the Mediterranean featuring the logo of EUROMED POSTAL, which indicates cooperation between the Postal Union for the Mediterranean. 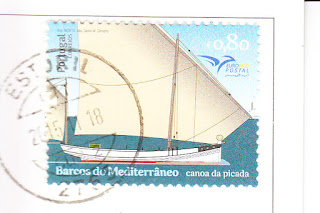 There you have it, I'll leave it at 3 cards this time. If the rain continues tomorrow, maybe I'll get another update in then. Take care. Thanks for cards go out to Dominique, Lena and Maria. Cheers.

Posted by Gem from Airdrie at 8:24 PM No comments: