Just a short update today. Two postcards arrived, both new countries for my collection, Malawi and Nepal. The card from Malawi, shows the 620 ton S.S. Ilala departing from Monkey Bay. 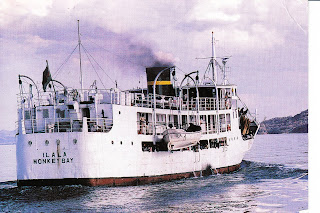 This working African ferry has sailed up and down Lake Malawi for over 50 years. The card , sent by Kassam Okhai , has 2 stamps of the 2003 butterfly series, both the K40 value. 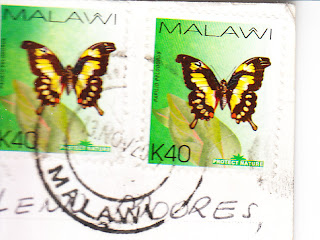 The other card , from Nepal, shows a view from Gokyo Mountain, including Gokyo Lake , which is in The Everest Region. It was sent to me by a member of The Kopan Monastery in Kathmandu. 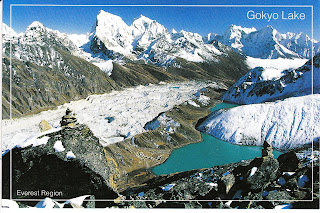 The card has 3 Nepal stamps on it, including a 2004 Sculpture Series, value R10, along with a 2005 single of The Sherpa Tribes Ornaments set, this one a R25 value showing The Limbu Tribe Ornaments, and finally a 2007 single showing Mt. Everest, value R5. 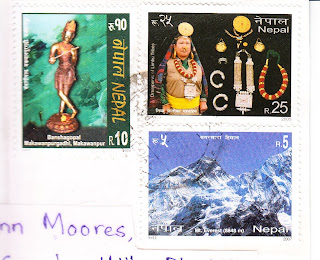 Today was a good day, postcard wise. I received 10 postcards , including 2 from 2 new countries, numbers 160 and 161. A card from Panama , country 160 , shows a cruise ship departing Pedro Miguel Locks and heading for Miraflores Locks. The card was sent by Winston Rice , otherwise known as Panama Jack. Unfortunately , it was sent without a stamp, the sender opting for a postage meter instead. However, it was still sent from Panama , so it has a place in my collection.

Another card was from Belgrade, Serbia, country 161. The card says that the oldest known settlement in the Belgrade area dates back to 5000 B.C. Later on, this region was inhabited by Illyrians, Celts and Romans.Slavs arrived there in the 7th century. 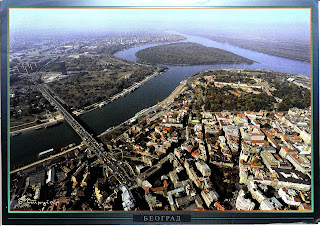 Belgrade was first mentioned under its Slavic name of Beli grad( White City) in written records of the 9th century. The stamp used on this card was a 46 value stamp issued 2007, picturing an eagle in flight. It was a joint issue with Austria. 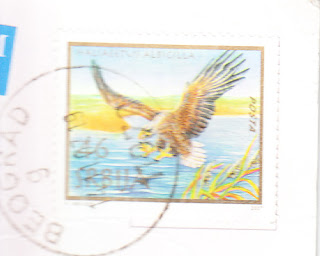 Thanks to Ana Popovic for this card.

The other cards were from Portugal , U.S.A. and The Netherlands, all received thru Postcrossing. There was also a card fro Malaysia , sent by S.L. Liew and 2 cards from Libya. These 2 were stamped but not postmarked, having been sent from Libya to the Canadian Embassey in Canada and then forwarded to me, in an envelope. The sender advised on one of the cards that he had sent a 3rd card direct to me thru the mail so that I would get a cancelled stamped postcard. I will be looking for this one in the days ahead.

I hope to have my scanner up and running sometime this weekend, so you will be able to seen a few of my postcards , not just read about them.
Posted by Gem from Airdrie at 8:27 PM 1 comment:

The mail lady, today , brought two postcards, one of which is a new country for my collection. It is country #159 and the postcard is from Samoa- The Treasured Islands Of The South Pacific. The card shows four different scenes of Apia, the country's capital. 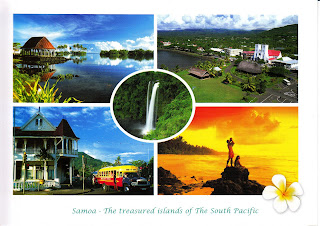 It was sent to me by Anita of The Siufaga Beach Resort and has an irregular shaped stamp, that of a shell. It is the $2.10 value issued in 2006. 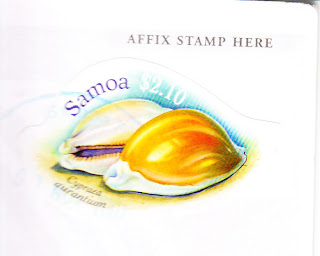 The card was mailed 01 Nov and took 19 days to arrive Canada.

The 2nd card today is from Portugal, sent by Jose again. It is a quite nice card showing the beach in The Algarve. This is somewhere that I visited , way back in 1976, along with Lisbon and Faro. The beach looks just as good as when I was then 30 years ago. Thanks Jose.
Posted by Gem from Airdrie at 3:09 PM No comments:

I didn't receive either postcard today, rather disappointing to say the least. I did however,receive an envelope from Portugal. It was sent by Jose of Stamp Friends Around The World fame. It contained a set of 6 stamps issued by Portugal on Sept 25th of this year. This set showcases Portuguese American Heritage. Jose was also kind enough to use three other nice new stamps on the envelope. Thanks Jose.
Posted by Gem from Airdrie at 2:40 PM No comments:

In today's mail I received two postcards. One was from Middleburg, Holland. It was sent by a Postcrosser and she used 3 nice Netherlands stamps. I have been in Postcrossing for 20 months and have received many postcards from many countries through its membership. The second card was sent from Baku, Azerbaijan , 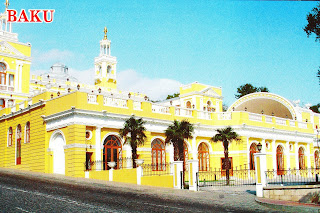 which is the 158th country , that I have received a postcard from. 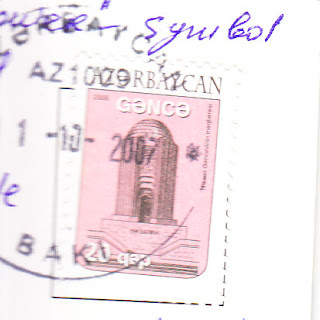 Posted by Gem from Airdrie at 11:52 PM No comments:

Today I received new country postcard number 157. It is a card from Botswana. The card shows The Okavango River and is put out by The kalahari Conservation Society, Gaborone, Botswana. 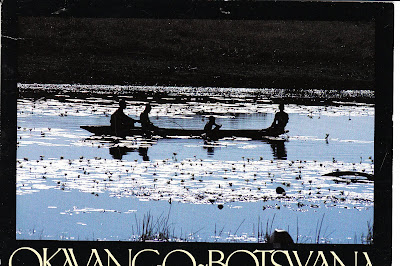 The stamp on the card shows a Bushpig. 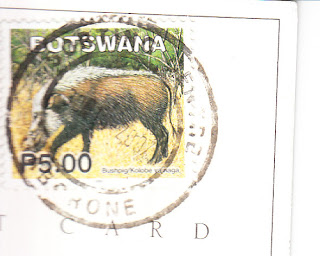 The Okavango is the river that never finds the sea. it empties into the sands of The Kalahari desert, irrigating 15000 square kms of the desert.
Posted by Gem from Airdrie at 10:25 AM No comments: