Igor's second card is a kind of unique card in that the preprinted stamp on the card is exactly like the picture on the cards front. The 2nd stamp , to the left was issued in 2004 and shows the Dornier DoX. The DoX was a German flying-boat first flown in 1929. It was powered by 12 Siemens Jupiter engines mounted in tandem on the wing providing a top speed of 105 mph and was intended to carry 66 passengers or 100 passengers on short trips alon with a crew of 14. In October 1929 the Dornier DoX took off and flew over Lake Constance with 169 people on board , setting a record for the number of people carried in an aircraft. This is a wonderful stamp for me as it will be part of my aircraft on stamps collection. Thanks Igor for these great postcards. 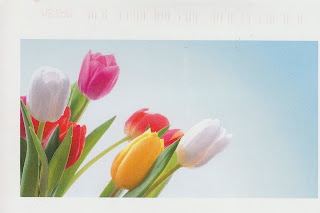 The final card for today is the Postcrossing card from Norway. It shows various scenes from Norway. The stamps used include a 2008 Valentine stamp , 2 definitives from 1997 and 2 older stamps from 1964 , issued for the centenary of the founding of Norwegian high schools. 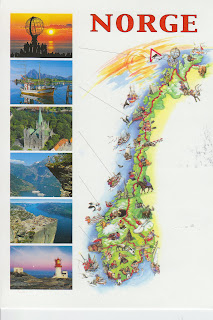 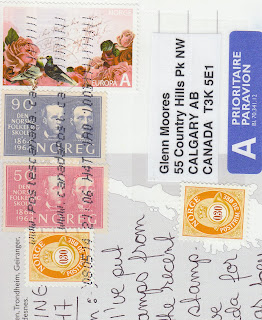 Have a great day all you blog readers.
Posted by Gem from Airdrie at 10:48 AM