Well, it's been one year since this blog was started. Who would have thought that it would have lasted ? But it has and it will keep going, something like the Eveready battery. It its first year , there have been 130 postings. When started , I had postcards from 157 different countries or stamp issuing entities. As of now, I have them from 205, an increase of 48. Also in this year of blogging my total received postcards have increased from 420 cards to 720 , an increase of 300 postcards. Not a bad year at all.
Now on to some postcards. I have a number of cards to show plus one cover , all received yesterday or today. First is a card from Brazil, showing a shoreline and some great waves for surfers. 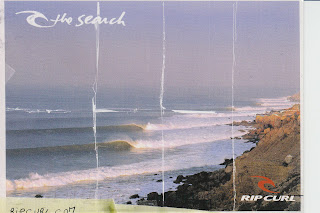 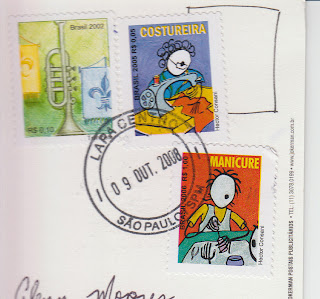 I wasn't able to locate any information on the other 2 stamps shown.

The next card is from Portugal. It was sent by fellow blogger Nuno Marques who writes on http://worldstampspostmarks.blogspot.com . Thanks Nuno for this card. The card shows Commerce Square and a statue of King D. Jose I located in Lisbon. 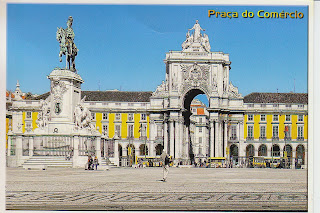 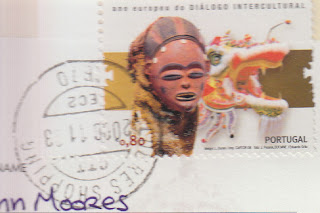 Now for a card from Kupio, Finland. Kuopio is a city of about 93,000 in eastern Finland. It is also a Postcrossing card sent by Pirkos. The card shows a ski-jumping facility. 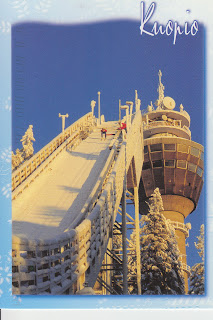 Pirkos used a 2008 stamp from a souvenir sheet of Alpine ski sports. This stamp is a hologram stamp showing a snow-boarder in action. 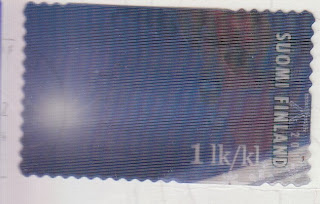 Just a great stamp and a new addition to my hologram stamps topical collection. Thanks Pirkos.

Here's a card from Travemunde , Germany. Travemunde has been a town since 1317. One of the attractions in Travemunde is a lighthouse dating from 1539, the oldest German lighthouse on the Baltic coast. The card shows quite a nice sailing ship. 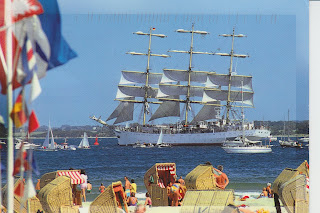 Jenny sent this card and used 2 stamps. The one on the right was issue in 2001, in a souvenir sheet and the other , issued in 2008 features birds.

Finally I want to show a cover that I received from khatuna in Tbilisi, Georgia. It has 7 recent Georgia stamps, 5 of them face different. Some great Georgia stamps. 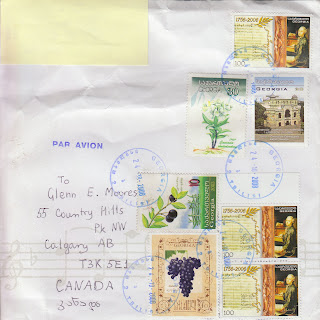 Inside was a selection of mint airplanes on stamps from Chile, Brazil and Georgia. All of these will add to my topical collection on aircraft on stamps.

That's all for today, a great way to start year 2 of my blog. As always, your comments are welcome.
Posted by Gem from Airdrie at 10:16 AM

happy anniversary Glenn! havent been here since the blog's beginning, but i have surely enjoyed reading it and looking at all the postcards and stamps and covers you have featured here...one gets to learn a rather lot by reading all that :)

wishing you many upcoming anniversaries and many more postcards and stamps in your collection :)

Great to hear that your nice blog is online for two years now! That's a very good reason to have a party :)

By the way I really like the Portuguese stamp. I think I'm a fan of Portuguese stamps, I like most series issues in recent years. I once went to an exhibition when there was a joint issue Belgium-Portugal, and I remember that I bought several nice Portuguese series (on archaeology and traditional costumes).

Sorry for the confusion. You're indeed celebrating the first anniversary of your blog... I do not know why I suddently thought it was the second one... Maybe I had not seen it well because my eyes are not 100% yet? :)

Anyway, one year or two does not really matter. You can have a party in both cases :)