Well it's the last day of the month, so I guess it's time for a last blog for November. I have four cards for this time.

The first one arrived from Tubuai, the main island of the Austral Island group, located 640 km south of Tahiti. The Austral Islands are found in the far southwest of French Polynesia in the South Pacific Ocean. An interesting fact about Tubuai - the mutineers of HMS Bounty arrived on Tubuai in 1789. Fletcher Christian and his cohorts only stayed on the island for two months before moving on . 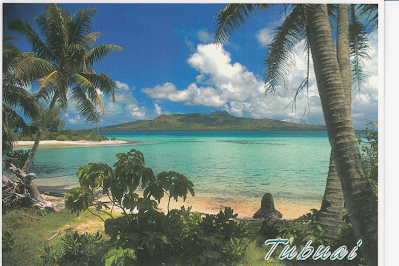 David used a couple of transport themed stamps, one with a large ship and one with a large aircraft. On the left , from a set of 3 issued in 2016, we see the Queen Elizabeth II , a ship often found in the south Pacific. On the right, from this current year, a stamp celebrating the 60th Anniversary of the Tahiti Faa'a Airport.

My next three cards are all compliments of Jean Pierre, and arrived from Croatia, Canada and Greece. The Croatia card shows an aerial view of Dubrovnik, a city in the southern part of the country on the Adriatic Sea. It is known for its Old Town , encircled with massive stone walls completed in the 16rg century. In 1979, Dubrovnik was added to the UNESCO World Heritage Sites list of World Heritage Sites in recognition of its outstanding medieval architecture. 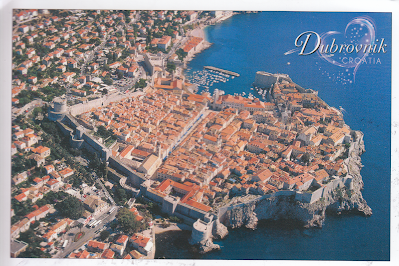 This card arrived with a Tokyo 2020 Olympic Games stamp. The games of course were held in 2021 due to the pandemic.

Card three arrived from Canada, which is a little strange, at least to me. It shows an Air Canada Airbus A320 in the Toronto Raptors livery. This picture of F-FDSN was taken in Miami . This aircraft was delivered to Air Canada way back in November 1990. It was taken out of service in September 2020 and is now stored at the airplane boneyard at Greenwood-Leflore Airport in Mississippi. 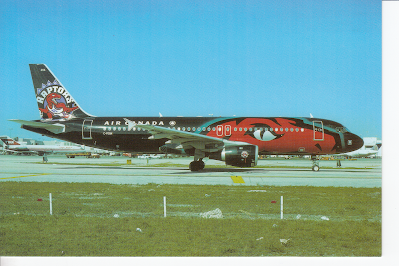 The stamp used here is from a set of 9 issued in 2020. It is the international rate stamp and shows The Cabot Trail, on Cape Breton Island, Nova Scotia. The set of stamps was called From Far and Wide. 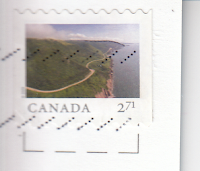 I imagine there is a story with this postcard mailed from Canada, but I am not privy to it, so that's that.
Now here's the last card for today. It's from Greece and shows Corfu and the runway at CFU. Corfu is an island in the Ionian Sea off Greece's northwest coast. It is known for its cosmopolitan Old Town, a UNESCO World Heritage Site. 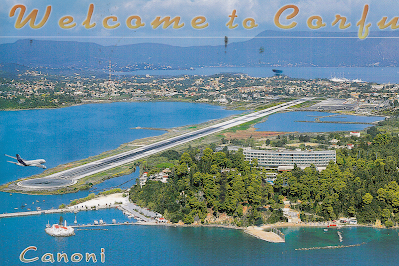 There you have it, the end of another update, the last for November. Today thanks for cards go out to David and Jean Pierre. Wonderful cards from wonderful places.
Well the world is getting a little smaller again, with this new Omicron variant of Covid-19. Borders are closing, more testing seems to be on the horizon, booster shots are getting to be the norm, it just never ends. I guess I have no right to complain, what with all the people that never made it through this pandemic.
The doctors still say  - wear a mask, wash your hands frequently and keep your distance. And get vaccinated if you are not. If you are not  - shame on you.
Posted by Gem from Airdrie at 10:23 PM