A Couple of Cards to See January Out

Well, that happened fast - January all but gone, a month of the new year gone already. Time sure does fly sometimes. I have just 2 cards to end the month with. One from the U.S.A and one from France.
Let's start with the U.S.  Aloha , this one is special as it's from one of my grandsons.
Evan was vacationing for a week in Maui, Hawaii with his Dad and Mom and younger sister. His card shows an adult Humpback whale and also her young swimming close by. Humpback whales, often called the clowns of the sea, range in length from 12-16 m and weigh about 36,000 kg. They have long pectoral fins and knobbly heads. Humpbacks are know for breaching , with males producing a complex song lasting 10-20 minutes. They feed only in summer in polar waters and then migrate to tropical waters to breed and give birth.
Evan was lucky enough to take in some whale watching while in Hawaii. I'm sure that was exciting , especially watching them breach. 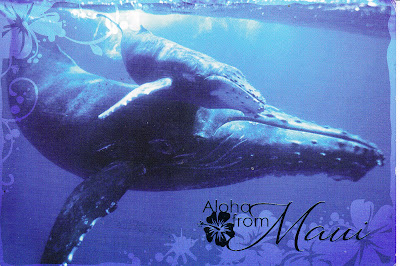 Now I don't usually show the whole back of a card, but I'm sure Evan won't  mind. Mahalo Evan . 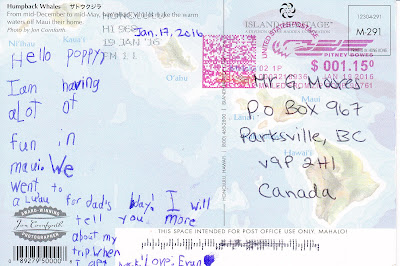 My second card , from France, shows a winter scene in Graufthal. The tiny town of Graufthal lies in the Zinsel Valley and grew around a Benedictine abbey in the 12th century. Several natural caves in the high sandstone cliffs were used as storage by the Abbey monks before being converted into living spaces over time. Called Maison des Rochhers, the cliffs act as the  back wall with rock forming the ceiling and floor. Only the fronts are man made. The last occupant, Catherine Ottermann,  died in 1958 and they have been listed as historical monuments since 1984. These troglodyte houses are today the setting for a museum showing the life of the last occupant. 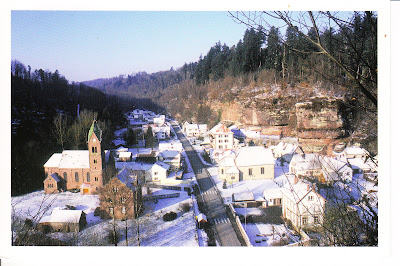 Frequent contributor Dominique used a 2014 stamp on this card. It celebrates 50 years of INSERM, the French Institute of Health and Medical Research, a biomedical and health research institution. 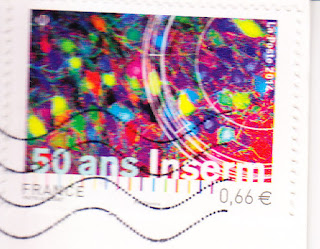 There you have it , the end of another update and even the end of a month. This is number 8 for the month and that's a great start to the new year .
Mahalo to Evan  for his card and thanks again to Dominique.  Take care and be sure to drop in again in February. I'll be here.
Posted by Gem from Airdrie at 11:49 AM