Malaysia, South Africa and 2 From the Archives

Happy Victoria Day
I want to take this opportunity to wish my fellow Canadians a Happy Victoria Day. For all of you non Canadian readers abroad, let me explain. Victoria Day is a public holiday observed across Canada on the Monday before May 25th. It celebrates Queen Victoria's birthday on May 24th.
Victoria Day is always on a Monday, and thus the holiday is part of a long weekend, which is commonly referred to as the Victoria Day Weekend, the May Long Weekend, the May Long, or the May Two-Four (a case of beer in Canada is called a "two-four" and many of these are consumed over the holiday). The weekend is also called the May 24th weekend, although it does not necessarily fall on May 24th. The Victoria Day Weekend is the first popular weekend for spring / summer travel. Lots of people open up their cottages, plant gardens, or just get away. Banks, schools and post offices are closed today, so no new postcards today.
Just to have a little fun for the 24th here is a little musical ditty to celebrate the weekend. The first one is a little music video and the second one is just the song with the words so you don't get lost in the Newfoundland accent. Enjoy !


Now on to the postcards at hand. First up is a card from South Africa. All you flag postcard collectors out there should enjoy this one. The South African flag is ethnic in design and concept and heralds an era of optimism, progress and peace for all South Africa's varied race groups. 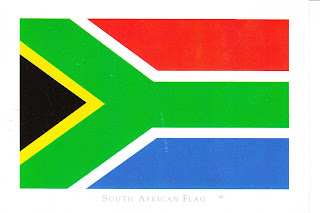 Bruce, a frequent contributor from down that way sent this card . Bruce used a newer definitive from 2010. It is 1 of a set of 27 showing handicrafts. 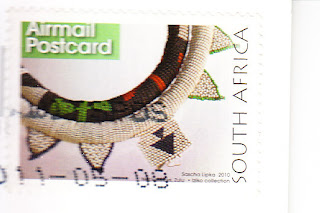 S.L. sent this next card from Malaysia. His card shows us the funicular train used to transport people and goods to Penang Hill (821 m above sea level). 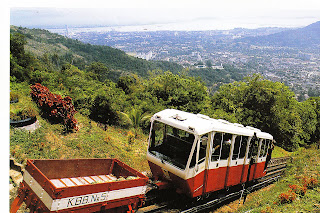 S.L. says that this train has now been replaced with an electrified train as of May of this year. We can also see a nice 2011 train stamp here, that looks like the train on the card.

An archive card, from 2006, is next. Izzi's card shows Deir El Kamar, a village in south central Lebanon, consisting of stone houses with red tiled roofs. 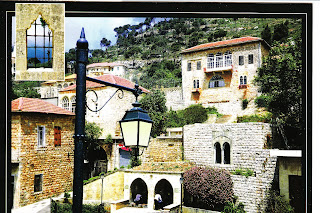 Izzi used 2 stamps from a set of 9 issued in 2005 showing buildings. The top one shows The national Museum and the other is Government Palace. 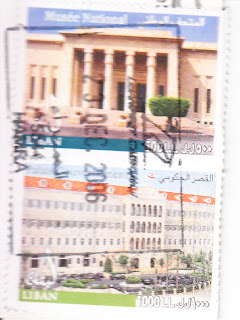 Today's final card is from Guatemala. On it we have a view of Temple II from Temple I , or Gran Jaguar, in Tikal, one of the most famous Mayan cities. 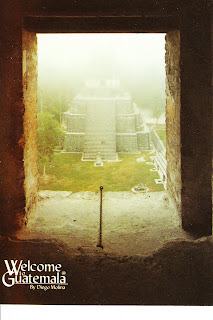 The stamps on Claudia's card all come from 2005. The 2 top ones are from a set of 8 , all showing churches. The bottom stamp is 1 of 4 issued for The Postal Union of the Americas, Spain and Portugal. 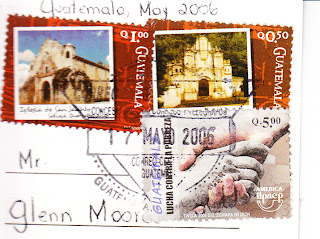 A short update again, but it seems I'm getting good at them. So thanks for today's card go to Bruce, S.L., Izzi and Claudia.
Posted by Gem from Airdrie at 2:40 PM

really interesting blog.Anytime you need items from India, Malaysia and Singapore let me know.I have a mix of mint and used postcards and stamps.Also from other Asian places.People of your calibre are rare.Keep up the good work.