As I mentioned in yesterday's update, postcards are still few and far between. I received just a single card in today's mail . But as they say- it's a good one. It is an official PostCrossing card from Germany. Tim, who says that he has checked out this blog, sent it along. The postcard is a view of an A380 Airbus, parked in front of Terminal 2 , at Frankfurt Airport.

It is an outstanding card and a wonderful addition to my collection. The A380 had its maiden flight on 27 April 2005 from Toulouse, France. Its first commercial flight was SQ380 from Singapore to Sydney on 25 October 2007, operated by Singapore Airlines. The A380 is a double-deck, wide body , 4 engine airliner built by Airbus. As of 25 August 2010, 50 of this type has been built. They cost between 317.2 and 337.5 million U.S. dollars. Airlines operating A380 aircraft include Air France , Emirates, Lufthansa, Qantas and Singapore Airlines. 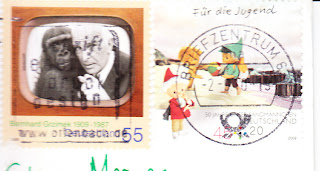 Speaking of the first commercial flight SQ380, I have the honor of owning a First Flight Cover from that historic flight. 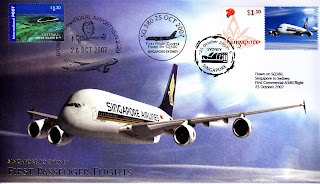 It is compliments of Michael Dodd of cddstamps of Australia. Michael actually carried the cover on the flight. 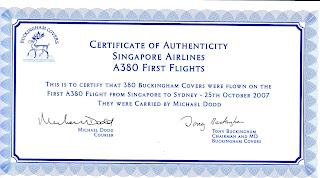 Thanks to Tim and also to Michael.

A small update to be sure , but I hope an interesting one for you readers.
Remember , don't be shy about leaving a comment.
Posted by Gem from Airdrie at 7:08 PM