I've Returned From Away

Well, I'm back as the title of this update says. Back from where one might ask. Newfoundland, my home province in Canada. I flew to Newfoundland, on Canada's east coast, visited family , experienced Hurricane Igor , and flew back. But not before I purchased and posted a few postcards. Igor was a category 1 hurricane when it struck Newfoundland. With roads washed away, trees blown down, power outages and houses flooded , I think I can safely say I'm glad it wasn't a category 2, 3, 4, or 5.
Now on to postcards. While away, I received 17 postcards. We will be looking at my usual complement of 5 cards this time.

Today's first card is from T.A.A.F. or the Territory of the French Southern and Antarctic Lands , located in the southern Indian Ocean. It is postmarked at Alfred Faure, the capital of Crozet Island. Alfred Faure is a permanent French scientific station on Crozet. Depending on the season , there are between 15 and 60 personnel working at the station. The card is from Johan who writes the blog Johan Postcards at www.johanpostcards.blogspot.com . The card shows the Marion Dufresne , 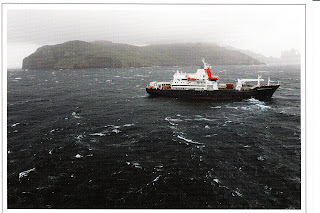 a supply ship that visits Alfred Faure a few times a year , delivering supplies and rotating crews of scientists. The stamp is a 2008 commemorative featuring the Marion Dufresne. 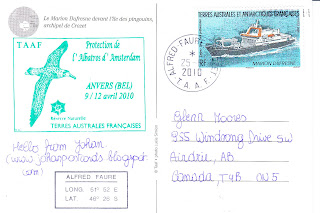 The next card is also from a so called exotic place, French Polynesia. Located in the southern Pacific Ocean, it is made up of a number of Polynesian islands, the most famous of which is Tahiti. The card shows Le Moana Bora Bora hotel. 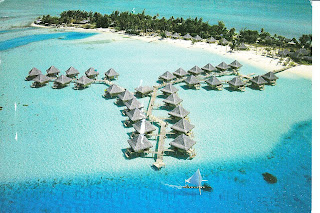 Not a bad spot to be as winter gets closer. The card is from Jean Pierre, a regular contributor of cards to this blog. It is postmarked in Vaitape on Bora Bora island. The postmark also reads Iles sous Le Vent or the Leeward Islands which are located in the western part of the Society Islands. The stamps on the card are both from 2010.

Now a card which to me is a great card. Picturing a number of airplanes and the airline KLM, it will certainly be another addition to my airlines/aircraft on postcard collection. It shows Schipol Airport in Amsterdam, one of Europe's largest and most modern airports. 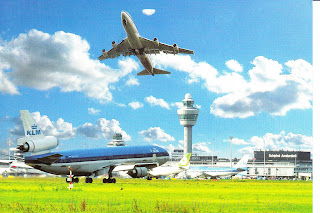 The card is from Leslie who was in Amsterdam for a PostCrossing meeting. Leslie signed the card along with 10 PostCrossers who attended the meeting. Leslie , thanks for the great card, don't worry about the stamp. ( which I'm not showing )

If I ended this update here, it would be a good one, but let's go on.

My next card is from Iceland, another exotic location, I think. Let's face it , how often do you get mail from Iceland ? The card shows an area of Reykjavik and claims to be Europe's most unpolluted city. 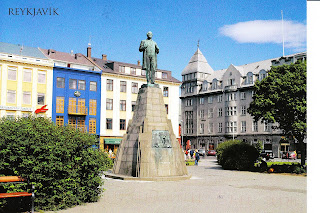 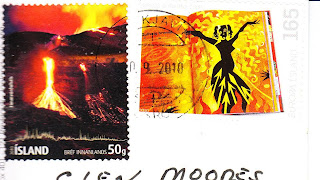 These stamps , issued on July 22 , each has a piece of history encapsulated on them. Each stamp includes volcanic ash from the eruption of Ryjafjallajokull earlier this year. The ash is silk-screen printed onto the stamps. Iceland Post describes the ash as very fine grained trachyandesite ash of 3 microns that fell on April 167. Iceland Post also says the ash is 60 percent silica content and came from a dept of about four and a half miles. Quite an interesting set of stamps. 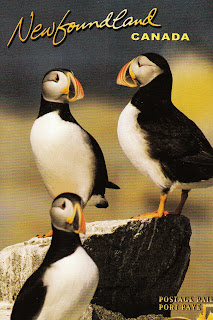 The card shows a number of Puffins, (Fratercula Arctica ) and they can be found in the North Atlantic Ocean. They breed in large colonies on rocky cliffs and off shore islands. This card is actually a prepaid card and can be mailed to anywhere in the world . 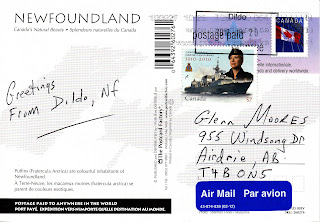 It comes imprinted with a Canadian Flag stamp. The sender saw fit to add a domestic Canadian stamp from 2010 honouring and celebrating the 100 years of the Canadian Navy. It is 1 of 2 in a set.

Thanks to Johan, Jean Pierre, Leslie and David for these great postcards. That is my update for today. I should be back again tomorrow with a few other cards that arrived while I was away.
take care.
Posted by Gem from Airdrie at 6:43 PM

Does Jean-Pierre have a website? If not, can you please forward my info to him? I see he travels in all kinds of exotic places...:)