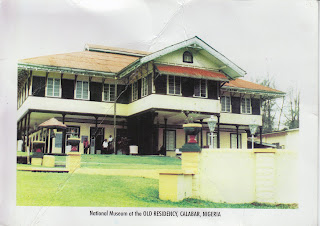 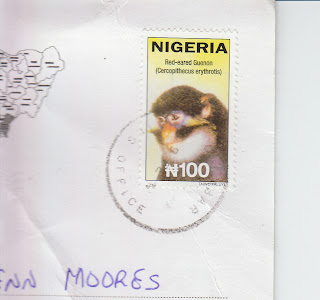 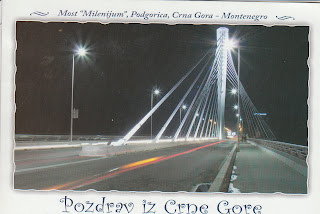 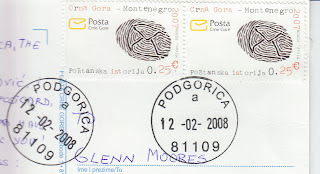 Today, I received two cards in the mail. One was from Nigeria , new country #178. It was sent by Edet Akpan of Calabar , Nigeria. The card shows The National Museum at the Old Residency in Calabar. This building was built in 1884 as the seat of the British Colonial Government of the Southern Protectorate of Nigeria. It housed the Consul-Generals from 1884-1914. It later became a National Monument in 1959 and then a museum in 1986.

The stamp used is one of a set of eight definitives , issued in 2001, showing animals. This particular stamp shows the Red-eared Guenon, one of Africa's rare monkeys. As of November 2006 there were no Red-eared Guenons in any of the world's zoos. They are an endangered or vulnerable species.

My other card today is from Montenegro, my 2nd from that country. It was sent from Podgorica, the capital. It has two circular postmarks. I wish all postmarks , especially Canada, had such clear and readable postmarks. The two stamps on the card are part of a set of 4 definitives issue in 2007. The card was sent by Mira Dujovic.


That's all for today.
Posted by Gem from Airdrie at 2:49 PM

I can see the hard work done by the blog owner. Keep posting such great things again. Looking forward for your next post.
mahendragarh pincode