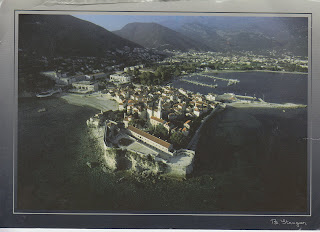 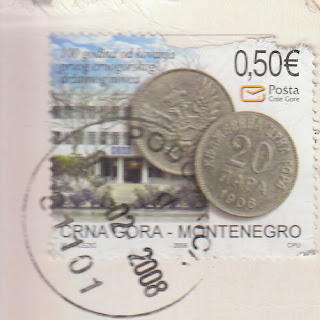 I received a postcard yesterday from Montenegro. This makes 177 different countries from which I have received a stamped postcard .Until last Sunday, this would have given me a complete collection of postcards from every country of Europe. Sad to say, this is no longer the case, with Kosovo declaring Independence on Sunday, 17 February 2008. Now I still need one more card from one more European country. If any readers of this blog have any idea or suggestion on how to achieve a postcard from Kosovo, please feel free to let me know. If you have any family or business contacts there, I would certainly appreciate your help with regard to a postcard from there. I await your help.

Now , back to the Montenegro postcard. It was sent by Pierre Surprenant , a fellow Canadian working for UNDP in Montenegro. He is doing contract work in the field of ammunition and explosives disposal.He is based in Podgorica from which this postcard was mailed. Podgorica is the capital and largest city in Montenegro. The city was previously called Titograd.

The postcard shows the city of Budva, a coastal city of around 10,000 inhabitants. The city is 2500 years old making it one of the oldest settlements on the Adriatic coast.
Budva is often called Montenegrin Kuwait, because of the high number of millionaires, compared to it's small population. It has about 200 millionaires from a population of 10,000.Budva is also the smallest town to have held a Rolling Stones concert, back on July 9th, 2007.

Montenegro is located in Southeastern Europe and shares borders with the Adriatic Sea, Croatia, Bosnia & Herzegovina, Serbia and Albania. It declared Independence on Jun 3, 2006. On June 28, 2006 its became the 192nd member state of the United Nations.

The stamp used on the card was issued in 2006 , is 1 of a set of 2 , showing the first coins of Montenegro. Thanks to Pierre for this card.
Posted by Gem from Airdrie at 1:43 PM