Hey there. It's been a while since my last update. Cards are in short supply and I have just 2 for today.  Card 1 arrived from Sri Lanka. It celebrates Horton Plains National Park. The park was formed in 1968 and is located in the central highlands of the country. It is rich in biodiversity and many species found here are endemic to the region. The park was added to the UNESCO World Heritage Sites list in 1988. The star attraction of this park is the World's End, where the plateau of the park comes to a sudden end and has a deep plunge of over 800 meters. 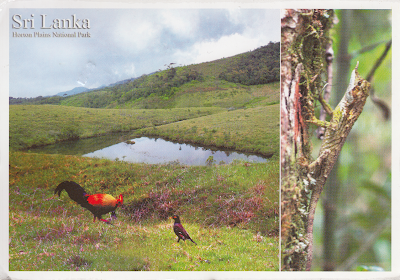 Ravindra used a number of stamps on his card, all from different years. The top stamp is from 2013 and commemorated the 125th Anniversary of Christ Church Girl's College in Baddegama. The lower left stamp is from a set of 6 issued in 2021 showing Endemic Birds of Sri Lanka. The lower right stamp, from 2007, shows Muthiah Muralidaran, a cricket coach and former player. 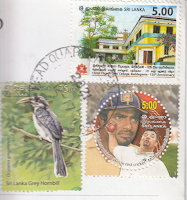 Today's second card is another favourite for me -  an Aircraft/Airline card. A B747 no less. It is registered as 9V-SFE , a B747 freighter in Singapore Airlines Cargo colors. The picture on the card shows it at Sharjah in December 1996. The aircraft is 25.2 years old and has seen service with Singapore Airlines, Great Wall Airlines, China Cargo Airlines, Air Atlanta Icelandic and Saudi Arabian Airlines. It was stored from March 2020 to July 2020 but is active again. I certainly like the nickname MEGA ARK , on the front of the fuselage. To me that implies great size, as Noah's Ark carried quite a lot also. Jean Pierre used 2 stamps on this one. On the left is 1 of 2 issue in 2020 for the Chinese New Year - Year of the Rat. The other stamp is from 2019 and commemorates the 50th Anniversary of Diplomatic Relations between Israel and Singapore. There were 2 stamps in the set and it was a Joint Issue with Israel.

Well that's it for this time, a short update of just 2 cards. Thanks for these cards go to Ravindra and Jean Pierre.

Posted by Gem from Airdrie at 7:09 PM