Cards From Germany and Elsewhere

Good Day to all. It's Black Friday, so a good day to stay home and blog. Not to mention it's  -20 C.
On to the cards - of course my first card is an Airline / Aircraft card. Arriving from Germany, it shows an Aero Lloyd Airbus A321, registered as D-ALAH. This aircraft entered service in 1998 and has sice seen service with Livingston, Volare Airlines and Onur Air. 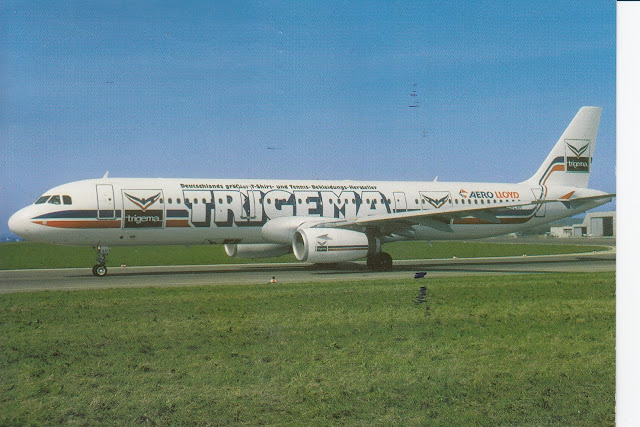 Reinhold used an assortment of stamps on his card. There are 2 Flower definitives, 2   ATM or computer stamps and 1 Airplane themed stamp which was issued in 2004. It shows the Dornier Do-X Flying Boat. 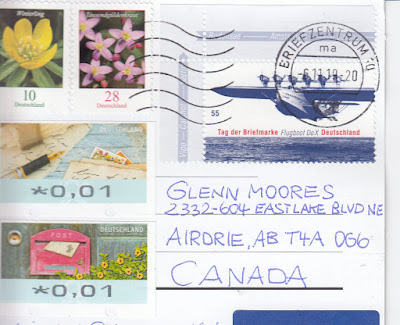 My next card is also from Germany. It's a sketch of Fantasia, The Sorcerer's Apprentice , from a Disney film of 1940. 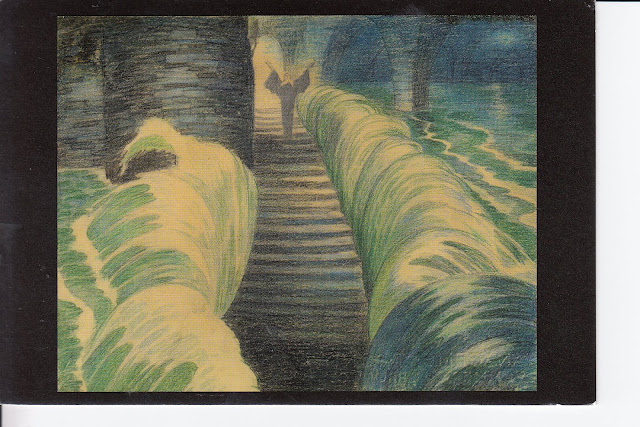 Tani used a Flower definitive along with a 2019 stamp featuring Baby Racoons. 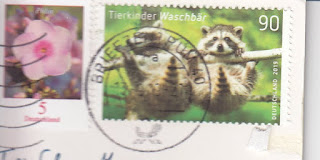 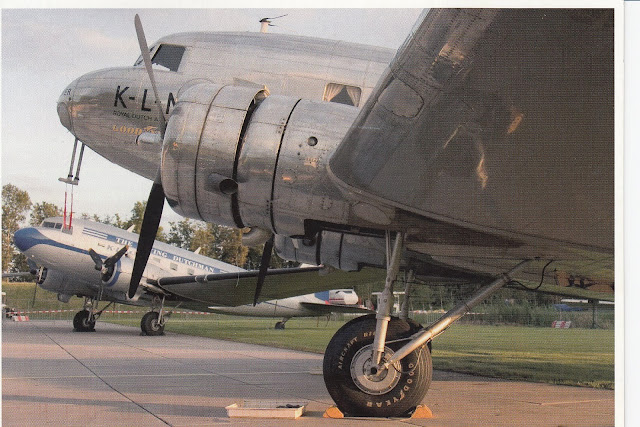 Calvin used a nice Aviation related stamp from this year. It is 1 of 3 stamps in a beautiful minisheet commemorating the 100th Anniversary of Dutch Aviation. The thing that sets this sheet off for me is that looking at the whole sheet, it seems to me that I am looking through the windows of an aircraft.It looks to me like the sheet has 7 windows to look through. . The other stamp is an International Rate Windmill stamp from 2014. 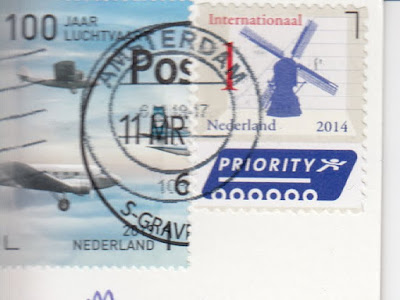 I think I'm going to have to add this minisheet to my collection. It's just that nice.

Here is a card from Lathi, Finland. This city of about 120,000 is located in the south of the country. Windows and flowers are featured . I believe the writing on the front translates to " Joy and Light of your day " . 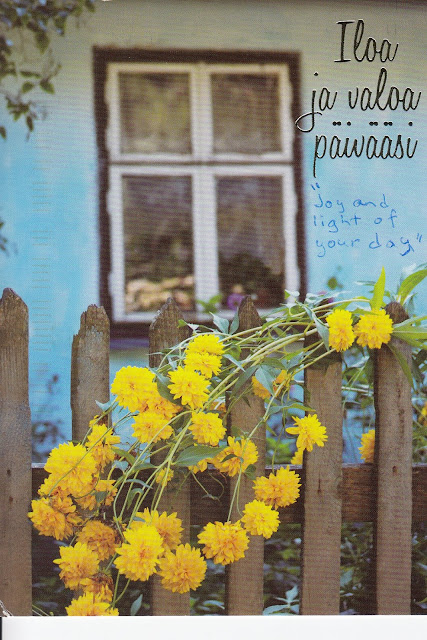 Jari used 2 stamps from a 2014 set of 10 issued showing Bridges and Waters.

Time now for a card from India. Nagi sent this one from a Postcrossing meeting at a stamp exhibition, Karnapex 2019.
The card shows a Sukhoi-30 MKI, a twin-jet all weather, long range fighter built for the Indian Air Force. 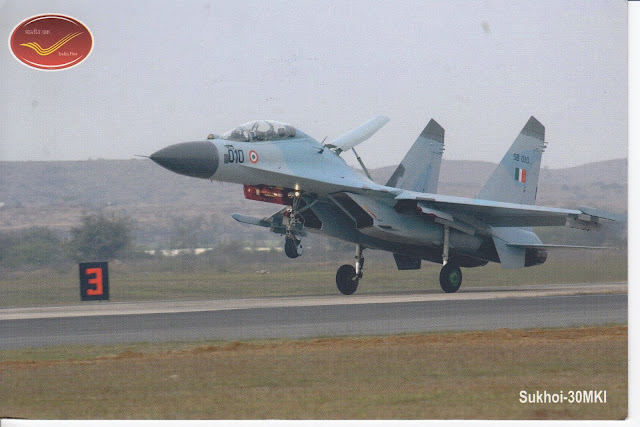 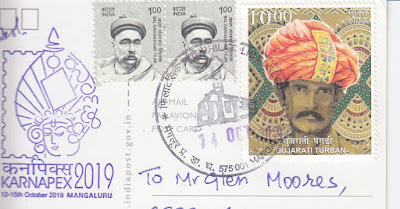 Hey , it's one more card from Germany. They must be a busy lot of postcarders.
This card shows an Austrian train in the Alps. 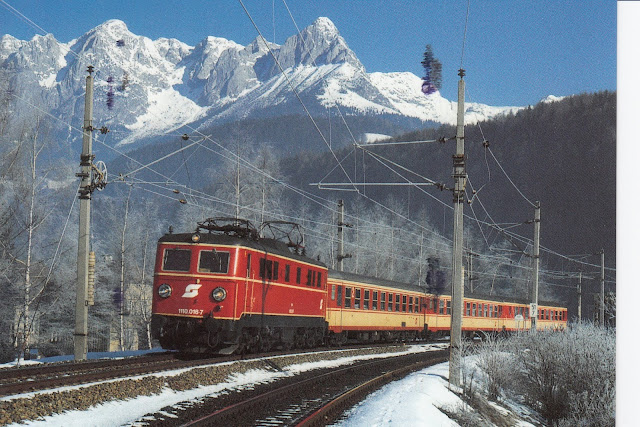 Albrecht used a Flower definitive and 2 other larger stamps. The top one is from 2016 and showcases the Naumburg Cathedral. The lower stamp was issued in 2017 and commemorates the 100th Anniversary of the City of Neunburg vorm Wald. 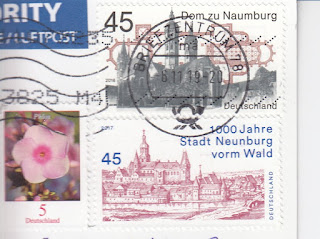 The last card today is from Hong Kong. It's a look at Chek Lap Kok International Airport. That's a Cathy Pacific Jet flying overhead.
In 2015, it was the 8th busiest airport in the world, with 68.5 million passengers. 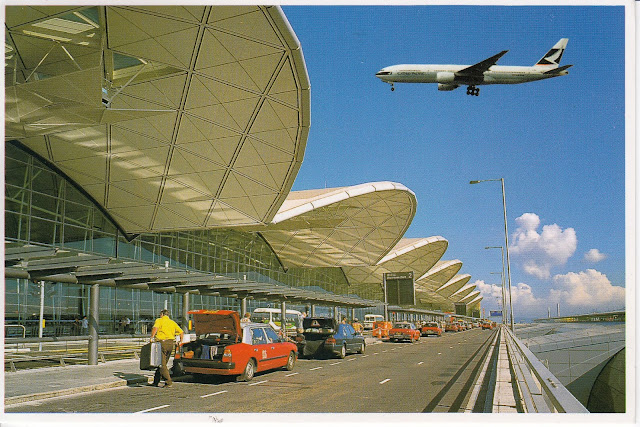 Andrew used 1 of 6 stamps in a 2019 minisheet. It showcases the Underwater World of Hong Kong. 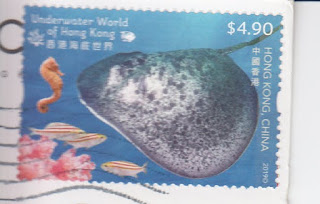 Well there you have it - another blog complete. It was Black Friday when I started , but I didn't get it finished until today - Saturday.
Thanks for cards today go out to Calvin, Jari, Reinhold, Tani, Nagi, Albrecht and Andrew.
Thanks for dropping in , see you next time.