Cards from Here and There

Hello again. I'm back with a few cards from all around. Big cards, smaller cards and shaped cards.
Let's start with this BIG card from Sri Lanka. Ravindra's card show four Lighthouse stamps issued by Sri Lanka in 1996. Left to right top to bottom , they are: Little Basses, Great Basses, Devinuwara and Galle Lighthouse. 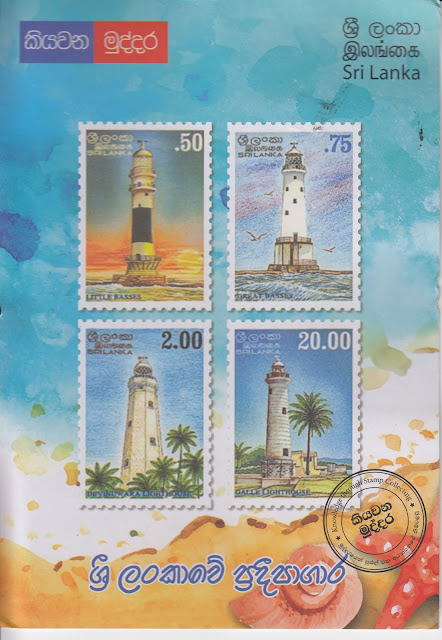 This lighthouse card arrived with a nice Lighthouse stamp issued in 2018. It is Galboka Point Light and is 1 of 4 in a set. 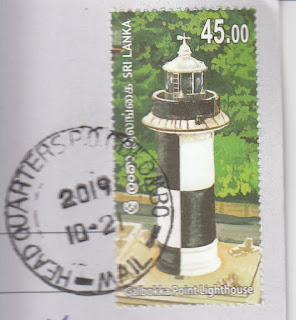 Next is this shaped card, although I'm not sure just what the shape represents. It was designed and printed for the Qingdao China Postcrossing Meetup held on September 13th of this year. It shows a ChinaPost mailbox. It was signed or ( actually stamped ) by 9 Postcrossing members. 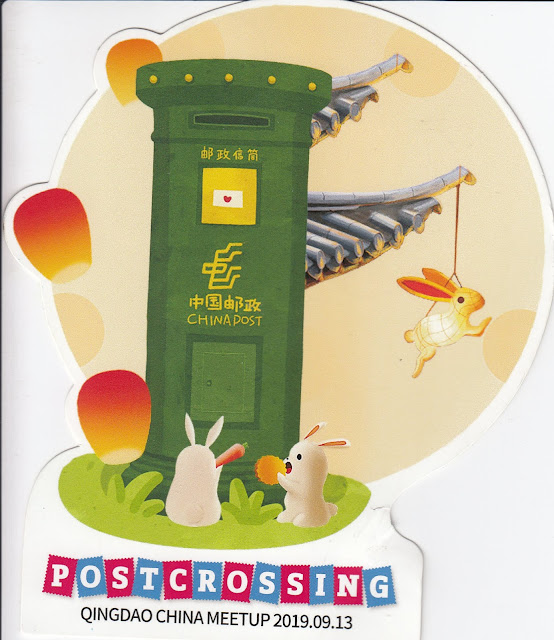 SiShanglong used 3 stamps on his card. Unfortunately , because of the way he positioned the stamps, you will need to move around a bit to look at them. Let me start at the top left - 1 of 4 in a set in a minisheet issued in 2017. Three of the four are China stamps and the 4th is a Hong Kong stamp. They were issued to Commemorate the 20th Anniversary of the Return of Hong Kong to China in 2017. It was a Joint Issue with Hong Kong. The next stamp, the grey one, was issue in 106. It is 1 of 4 in a set showcasing Chinese Scientists. Here we see Ding Wenjiang. The final stamp shows a Sailing Ship and it was issued in 2013. 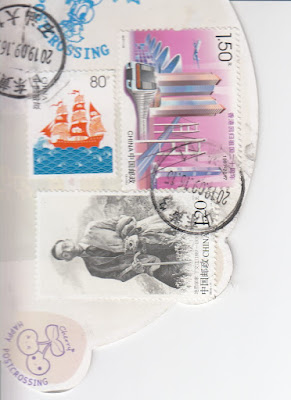 Now here's a card showing a few sites in Kuala Lumpur, Malaysia. At top left is Jamek Mosque , dating from 1909. At bottom left is the former Kuala Lumpur Railway Station, built in 1910. At right is The National Monument. It was unveiled in 1966. 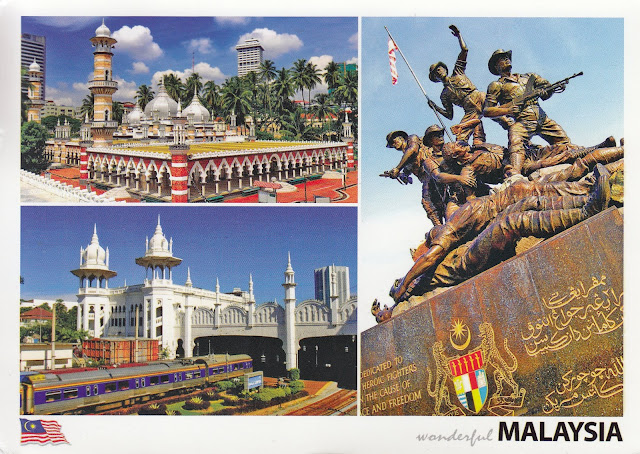 Hong Kong is up next. Featured on the card is a Chinese junk in Hong Kong harbour, a traditional Chinese wooded sailboat, dating back to the Han Dynasty. Back a number of years ago, during our visit to Hong Kong, we had the pleasure of sailing on a sampan but not a junk. 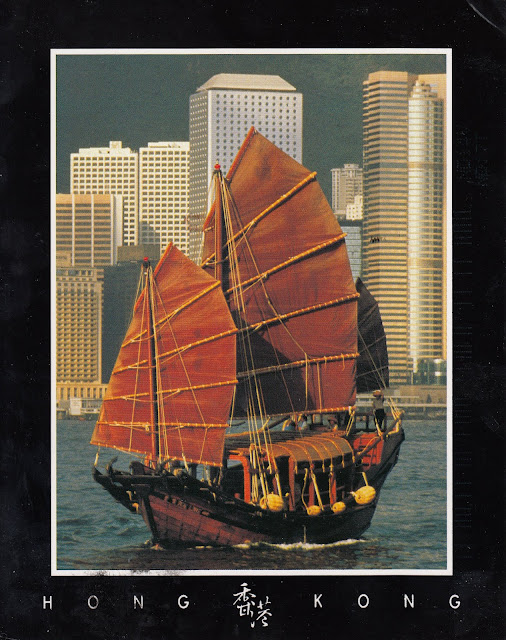 Zero used a wonderful selection of stamps on her card. At top left is 1 of 6 issued in 2019 highlighting the Government Flying Service. The top right stamp, from 2018, is 1 of 6 Commemorating the 150th Anniversary of the Hong Kong Fire Services Department. The middle stamp , also from 2019, is 1 of 6 celebrating the Underwater World of Hong Kong. The triangle stamp was issued this year, 1 of 4 Commemorating the 70th Anniversary of the Chinese People's Republic. 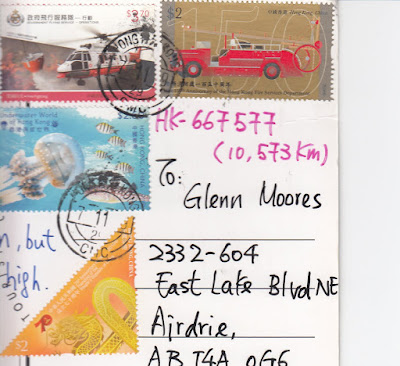 Now here's a card that's apparently been on the go quite a long time. It arrived from Zimbabwe and shows an artist's rendition of an antelope, possibly a roan antelope. 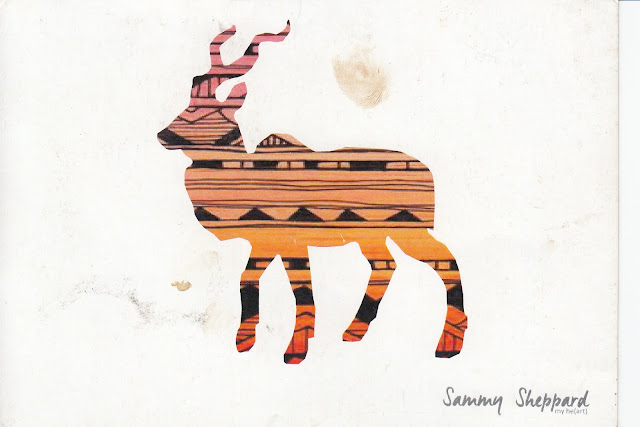 Bruce used a stamp from 2005 on his card. It is 1 of 4 Birds issued that year. Shown is the Mombo Double Collared Sunbird.

This is the last card for today. It's a cool look for a jet aircraft- shaded in black. 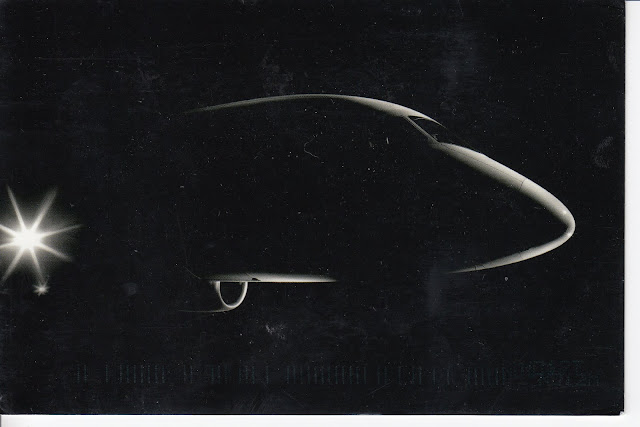 Bogdan sent this card from Poland. The two same stamps are from 2015, part of a continuing Flowers and Fruits definitive set. The other is from 2019 and features Polish Footballer Kzimierz Deyna. 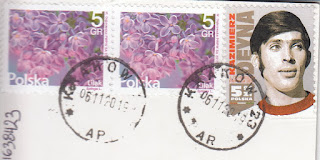 O.K so ends another update. Thanks for today's cards go out to Ravindra, SiShanglong, Nurhafizah, Zero, Bruce and Bogdan. Thank you all.
Take care, drop back soon.