I'm sure it's time for another update here. It's been over a week now and I just have to ask myself " where does the time go ? " Anyway here are some recently arrived postcards from here and there.

First up is this card from Myanmar. A nice view of a few temples and ruins. Not to mention the wagon train in the foreground. Looking much like the old west there. 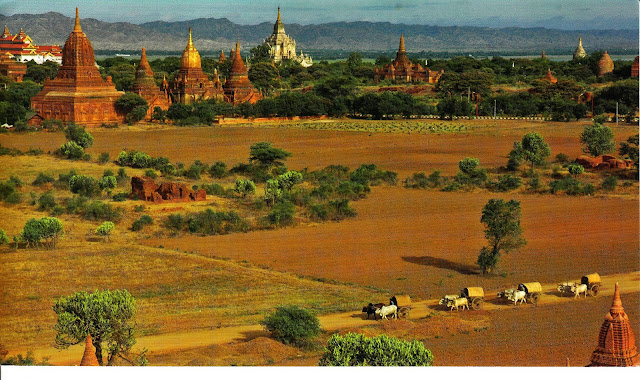 Three nice stamps on this one. On the left is a 2002 stamp celebrating the Asian and Pacific Decade of Disabled Persons. In the middle is a 1997 stamp celebrating ASEAN, the Association of Southeast Asian Nations. Then over on the right is that mystery stamp that I have received a number of times now. Still can't locate any info on it.

My next card is an interesting one. It's a map card and a Postcrossing card all in one. It shows the city of Trstena located right in the center of the card. This card was designed by a student from a Trstena primary school , especially for Postcrossing. 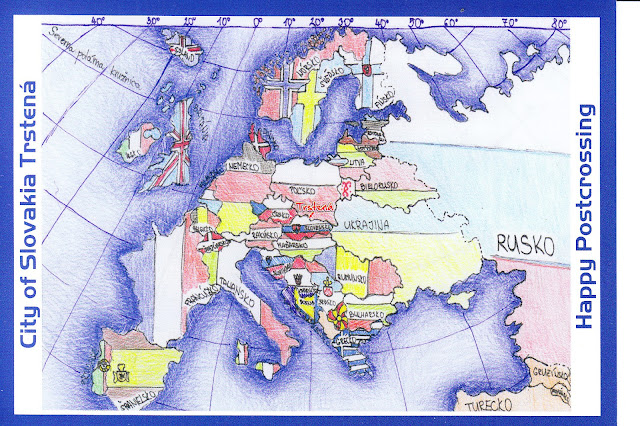 Tatiana, an eleven year old PostCrosser sent this card to me. Sadly she didn't use a stamp but a postage meter from Bratislava. 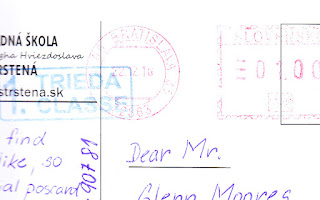 Today's 3rd card is also from a Postcrosser. This time it's Imane who lives near Paris, but she was vacation in Morocco, so her card arrived from there. That's a nice blue gate in a blue courtyard. 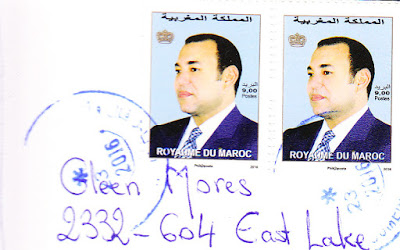 Now here's a card showing the pilgrim house, all decorated for Christmas, in Colmar, France. You'll find lots of great decorations along the streets here. It's also the sight of a beautiful Christmas market. 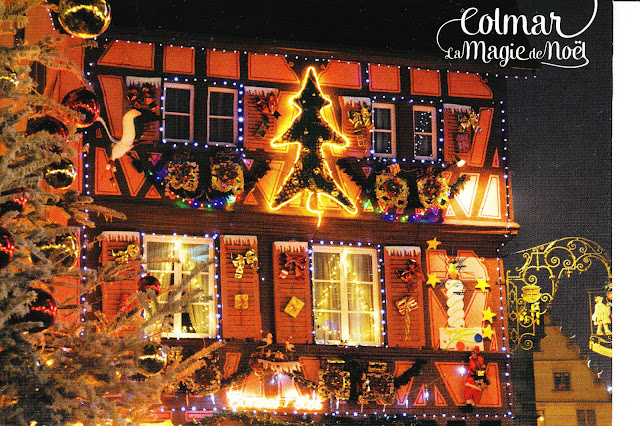 Dominique used a 2015 stamp here, highlighting St Martial de Lestards Church, the only one in France with a lush thatched roof. 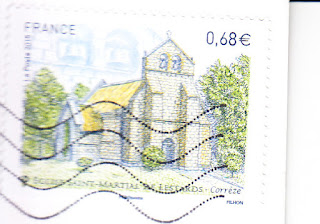 Next up is a card from the Kingdom of Swaziland, showing the Reed Dance Ceremony. This is Swaziland's best known cultural event. In the eight day ceremony, young girls cut reeds, present them to the Queen Mother and then dance in celebration. Up to 40,000 girls take part. 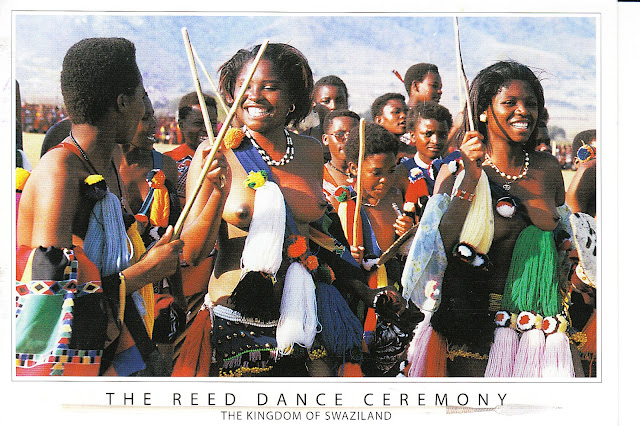 Bruce, who hails from South Africa , was visiting Swaziland and sent this card. On the left is a 2013 stamp showing Sikhuphe International Airport. In the center is a stamp showcasing the First Lilangeni Currency. Over on the right is a Butterfly stamp from 1991.

Time for an Airline/Aircraft card I think. This time it's a Lufthansa Cityliner British Aerospace Avro RJ85. The aircraft , D-AVRM had its first flight on 18 May 1996. It is now operated by Aero Flite as N366AC. 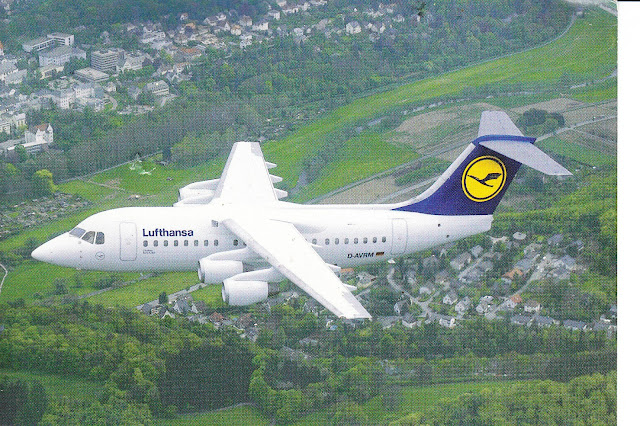 Ravindra used 3 fine stamps on his card. On the top left is one issued in 2014 for the Sri Lanka Standards Institution. On the right is a 2016 stamp celebrating the National Milad-Un-Nabi Festival.
The bottom stamp is a definitive overprint from 2016. 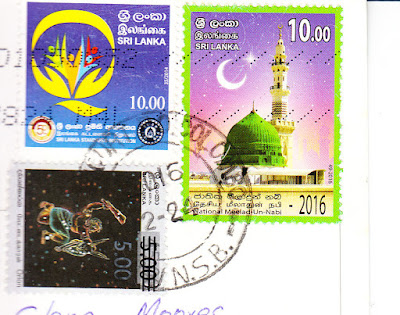 I know you've been waiting , so here's the last card for this time. It arrived from South Africa. It's the Durban beachfront at sunrise. 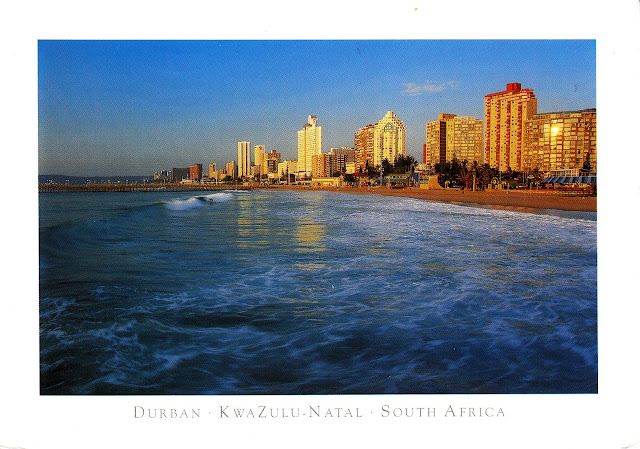 Interestingly, this card is from Bruce and Jean Pierre, who was visiting. Two nice stamps, on the left is 1 of 5 celebrating Puppetry in South Africa. On the right is , again 1 of 5, showing a Half Collared Kingfisher.

That's it for this time. Good cards from Good people. Thanks to all - Jobbo, Tatiana, Imane, Dominique, Bruce, Ravindra and Bruce & Jean Pierre.

I was visiting your blog when I read about your mystery stamp.
When I try to find some information about stamps I sometimes use the site Stampworld.com.
Here I found the Myanmar stamp: 2013 The 27th South East Asian Games - Myanmar
https://www.stampworld.com/en/stamps/Myanmar/Postage%20stamps/2010-2016?user=94344&year=2013
I hope that solves the mystery. (^_^)
Where do you usually find your information?

You have provided the very wonderful information and very important. And for such people, such information proves to be quite beneficial.
Thank you so much for this

This is absolutely exceptional. Even though variety of article on this topic, this article carries a number of the treasured points which had been never be read in other articles.
Pincodestreet

Thanks so much for sharing this awesome info! I am looking forward to see more posts by you!
Zkarts