This is the first blog update for year 2017.


With no new cards on hand, the post office is still closed here in Canada, it reopens tomorrow, I think a few cards from last summer's road trip to Montana, USA might be in order.

First let's look at a card of the Weeping Wall. This is a geological formation found along Going-to-the-Sun Road in Glacier National Park, in Montana. It is a natural waterfall that seeps out from the side of the Garden Wall , and is fed by runoff from snowmelt. 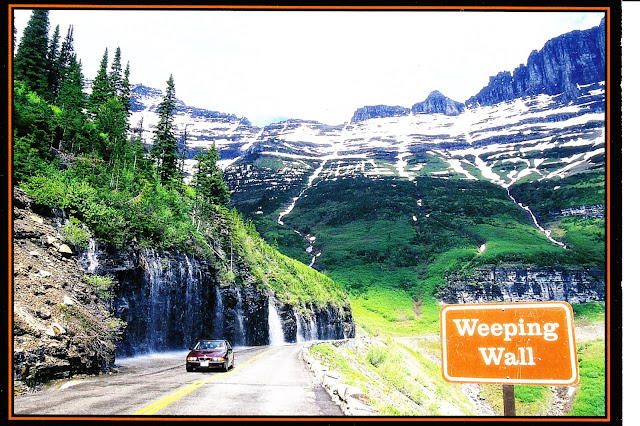 On this one you can see 3 of 4 Classic Pickup stamps issued in 2016. It was posted in West Glacier , population 227 as of 2010. The town is at the west entrance to Glacier National Park. 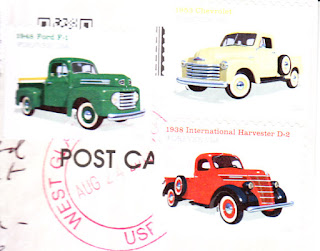 Here's a second card from West Glacier. This one is for the Railway, Train postcard collectors out there. It's the Great Northern Railway's Streamlined Empire Builder, along the border of Glacier National Park, possibly in the 1940s. 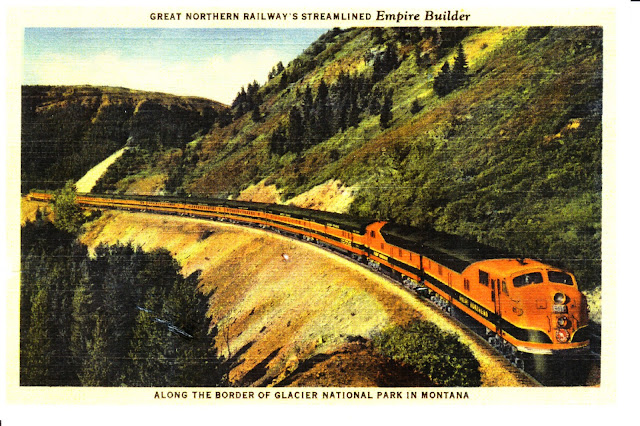 Bit of a mix of stamps on this one. On the left is the 2015 Elvis Stamp. In the middle is the 2016 New Horizons Spacecraft stamp. Over on the right is the 4th Classic Pickup Truck stamp.
Interesting fact related to the New Horizons stamp - when the New Horizons spacecraft was launched from Cape Canaveral , Florida in 2006, a 1991 " Pluto Not Yet Explored " stamp was affixed to the ship. As a result Guinness World Records recognizes the the stamp as the one that has traveled the farthest distance, having gone more than 5.4 billion kilometers to Pluto and beyond. And of course that record is being broken every second, as it heads away from Pluto. 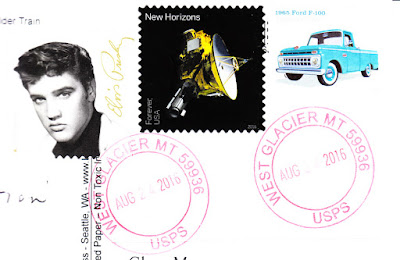 The next card is a great look at Saint Mary Lake, the second largest lake in Glacier National Park. The lake is 15.9 km long and 91 m deep. Water from Saint Mary flows neither to the Atlantic nor the Pacific , but crosses Canada to enter the Arctic Ocean at Hudson Bay. 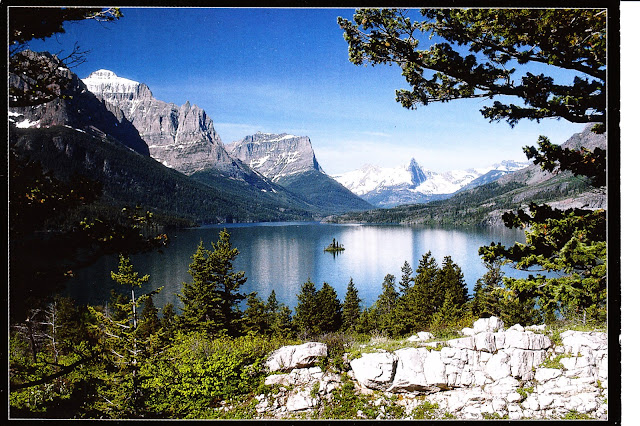 This card is from My Lovely Teena and she used 3 of the afore mentioned Classic Pickup Trucks issue. Posted at Babb, Montana, is a small community on the Blackfoot Indian reservation with a population of 174 in 2010. 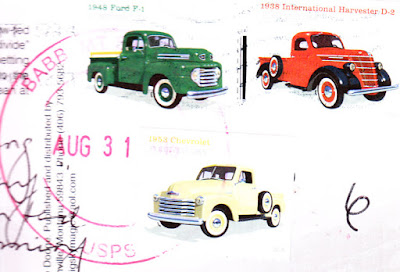 Now I have 3 cards , all of which show old photos of American Indians. They were all posted in East Glacier Park , a small town with a population of 363 in 2010.
First is a 1874 photo by O.S.Goff of Long Soldier, a well known Sioux Chief at Standing Rock Agency. His beaver top hat was quite in vogue during the Civil War days. 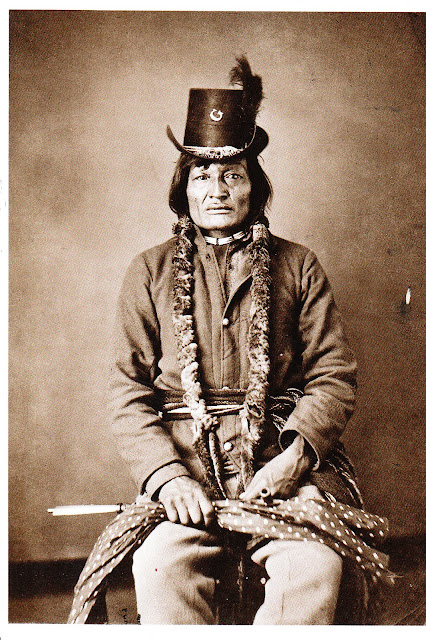 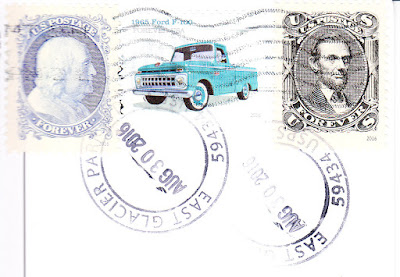 The second of these 3 cards is a 1877 photo by Orlando S. Goff, showing Chief Joseph. Joseph was forced from his native homeland in 1877, leading 750 of his people on a three month, 1300 mile journey, defeating the U.S. Army in seven major battles before being captured within 40 miles of the Canadian border and sanctuary . Upon his surrender, Joseph said " I will fight no more forever " . 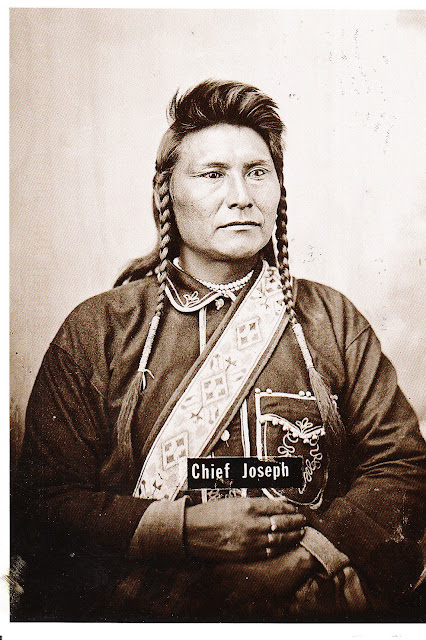 On this one, we have 2 stamps from the 2016 set of 8 Views of Our Planets, and an Elvis stamp. All Heavenly bodies no doubt. 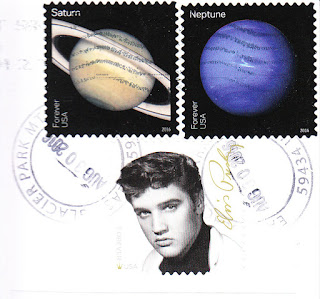 Rounding out these three is Little Bird,an Ojibwa woman in a 1908 photo by Roland Reed, showing her proud heritage. . 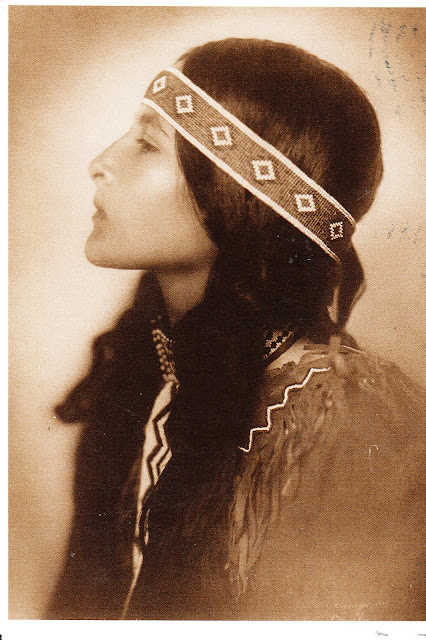 It's another appearance by Elvis , along with 2 more of the Classic Era stamps from 2016. 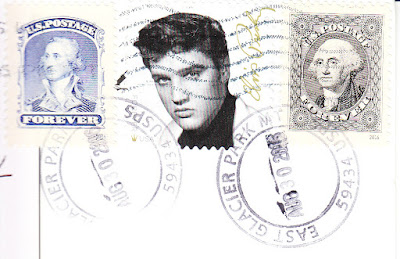 There are still a few more cards from this road trip, but that's all for today. The other 4 or 5 will make an appearance in the not too distance future.
That's it for this time, the new year has indeed started.
Take care.
Posted by Gem from Airdrie at 4:41 PM