The Grenadines of St. Vincent

Today's update is all about The Grenadines of St. Vincent. I have received five postcards , one each from Union Island, Mayreau, Bequia, Canouan and Mustique. All islands of The Grenadines. St. Vincent issued stamps for The Grenadines as early as 1974, however specific stamps for specific islands of The Grenadines appeared as follows : Union Island 1984, Bequia 1984, Mustique 2003, Canouan 2003, and Mayreau 2006. At least this is what my reasearch shows, if you know otherwise , I am happy to hear from you. I already had postcards in my collection from Bequia and Canouan , but they are franked with St. Vincent stamps. So my mission was to try for cards from St. Vincent , but franked with stamps from each of The Grenadines. These stamps would actually be the first stamps of each place in my collection. So it would be a two fold mission, first stamps and postcards franked with those stamps. I contacted many people and groups , businesses and others on the specific islands and the result was always the same- we don't have specific stamps for the islands. I would go back and say yes, you do and show them scans of the stamps. The next reply would always be , well I never saw these stamps, they are never for sale here. I don't really know the politics involved here and really don't care. I'm just a stamp and postcard collector. So moving on- I found a contact in St. Vincent and have received the five postcards , each with a stamp or stamps of the five Islands of The Grenadines. These are the cards for today.
Union Island- Union Island is located in the south Eastern Caribbean , 90 km southwest of Barbados. It is the southernmost island of the Grenadines. The island's population is around 3000 and the two main towns are Clifton and Ashton. 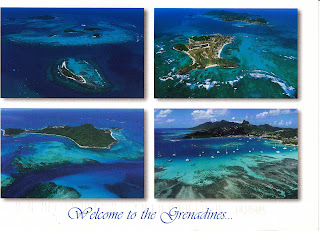 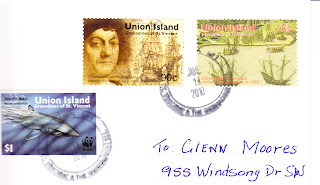 The stamp on the left is from 2002 and is a WWF issue featuring a shark. The other stamps were issued in 2006 and are 2 of 4 featuring Columbus.
Mayreau- Mayreau has a population of around 200 and is the smallest inhabited island of the Grenadines. The population is centered in Old Wall Village and it is only accessible by boat. 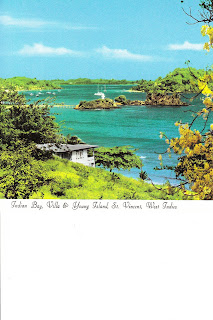 The card shows Indian bay and Young Island, located on the south coast of St. Vincent. The Mayreau stamp was issued in 2008 and celebrates the America's Cup.

Bequia- Bequia is the second larges island in the Grenadines. It has about 6000 people living there. This card shows four areas of Bequia ( top left and clockwise ) 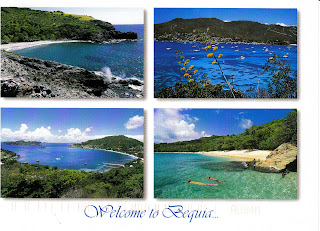 Ravine Bay, Admiralty Bay, Princess Margaret Bay and Friendship Bay. The stamp was issued in 2004 and is 1 of 4 celebrating Columbus. 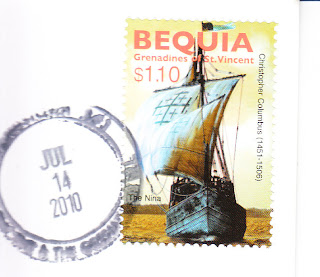 Canouan- Canouan is located in the heart of the Grenadines. This 3 sq mile island is surrounded by small bays and coves, white sandy beaches and one of the Caribbean's largest coral reefs. The island's only village is Retreat Village and has a population of about 2000. 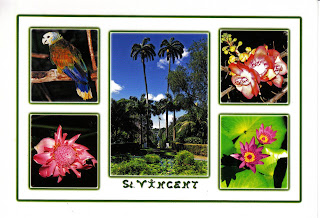 This card shows The Botanic Gardens in St. Vincent. The Canouan stamp is from 2004 and is 1 of 4 featuring Butterflies. 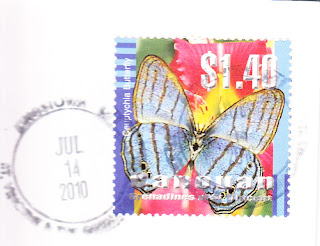 Mustique- Even though it is part of St. Vincent and The Grenadines, Mustique is a private island. The island is owned by the Mustique Company. A population of around 500 live in the villages of Lovell, Britania Bay and Dover. 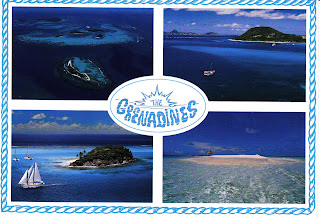 On this card you can see, same direction, Tobago Cays, Petit St Vincent, Morpion and again Tobago Cays. The stamp used is from 1 2003 set of 4 , featuring birds. 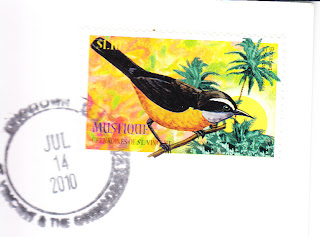 As I mentioned earlier, I already had received postcards from Bequia and Canouan . So with the 3 new additions of Mustique , Mayreau and Union Island, I can knock three more off my list. These will be # 239, 240 and 241.

That's it for today and this week. See you again on Monday. I hope this update is not too confusing, it's a little blurry even for me. I am happy to move on to some other countries or entities. Stay tuned.
Posted by Gem from Airdrie at 7:05 PM

You've shared Stamps, it's really valuable. And you have provided information about stamps, it is very important. Thank you so much for this
Gaborone Postcard

This is absolutely exceptional. Even though variety of article on this topic, this article carries many treasured points which had been never be read in other articles.
mau postal code