My Recent Cruise as Seen Thru Postcards I Mailed

I feel really good about my blog today. Not only do I have a great update today, but my next one will be even better. Today, since all the postcards that I sent to myself have arrived, I want to showcase my recent Panama Canal cruise , that I took with my lovely Teena. Our trip started when we flew from Calgary to San Diego, where we would board our ship, the Carnival Elation. The Elation , with a beam of 103 feet , carries 2040 passengers and a crew of 920. We certainly weren't alone. 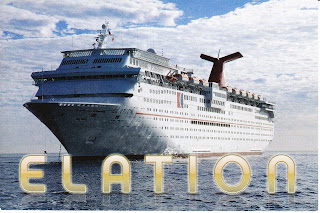 I didn't post any postcards in San Diego, actually, I didn't think of it. The postcard of the ship was posted in Cartagena, Colombia . If I had posted them on board the ship, they would not have entered the mail stream until we arrived in Tampa, our first US port. The stamps , the left one is upside down, were both issued in 2009. 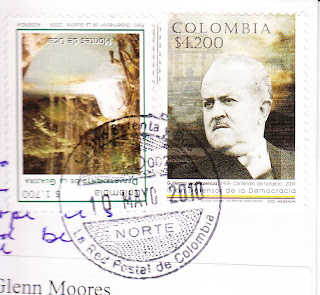 The one on the right features G. Leon Valencia , a local politician , while the other is from a 12 value multi sheet featuring sites and scenes in La Guajiri province. Postage was quite expensive in Colombia , postcards were at the rate of $3.00 USD each , anywhere.

Our first port of call was Cabo San Lucas, Mexico. The Cabo card shows Los Cabos Arch. This is a natural stone arch located at the southermost tip of the Baja Peninsula. 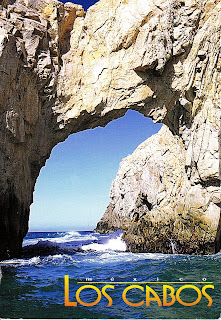 This is where the Pacific Ocean meets the Sea of Cortez. The end of the peninsula where the land ends is quite striking and quite the place for pictures. While sightseeing in Los Cabos, I tried to find a post office. We had no luck there. I asked our guide about it and he offered to mail my postcards for me. I gave him the money for stamps , which he promised to buy and stick on the cards and drop them in the mail. Sounds easy, but you never know. He had told me he was traveling back to the States in about 10 days, and it looks like he took my postcards with him and posted them in San Diego, Calif. Hence the US stamps, not Mexican Stamps . 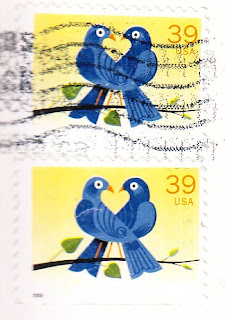 At least he posted them for me. The stamps are the 2006 Love Birds stamp.

Our next port of call was Acapulco, Mexico. The card from here shows the world famous cliff divers of Acapulco. A major tourist attraction. 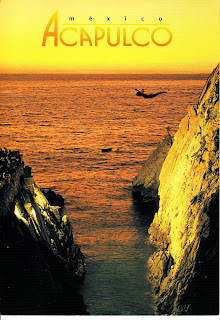 I learned that if you are a diver, then chances are that your father was also, and your son will probably be one also. The business of diving seems to be kept in the family. Teena and I walked , for not too long, and found a post office. So, I posted my cards here and at all other ports on the cruise. The stamps on this particular card are from 2008 and highlight the 50th anniversary of the Ariel. It has long been considered Mexico's most prestigious film award. 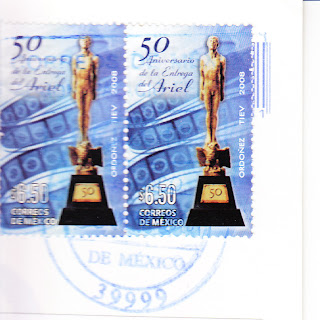 Next we move on to Costa Rica. Our port here was at Puntarenas, a city of about 102,000. As we did in Acapulco, after the sightseeing, we went and found a post office. Let me tell you, it was HOT, and we felt it. The card shows The National Theater in San Jose, the capital. 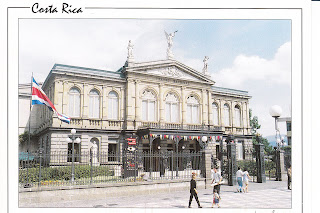 The lady in the post office was quite helpful and in addition to the stamps on our postcards , I managed to pick up a few other items for my collection. The stamp on the postcard is not really a stamp but some sort of sticker , doing the work of a stamp, even though it has the postage amount printed on it. It has been in use since 2007. 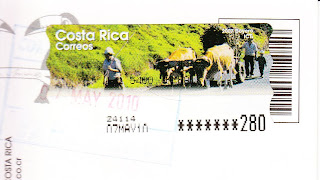 After leaving Costa Rica, we sailed towards Panama and The Panama Canal .We entered the Canal at 0630 and it took exactly 9 hours to transit from Pacific to Atlantic Ocean. We didn't actually stop in Panama so my Panama cards were posted in Cartagena, Colombia, our next port of call.
I have a few interesting Canal facts to share. 1 - a ship saves 7,892 miles using the canal instead of going around Cape Horn. 2- The toll for transiting the Canal varies, the most expensive toll was on May 16, 2008 , $331,200 for the Disney Magic and the least expensive was $0.36 and was paid by Richard Halliburton who crossed the Canal swimming in 1928. 3- The maximum dimensions of ships that can transit are: 106 feet in beam, 965 feet long and 39.5 feet of draft.
Enough facts, on to more postcards. I picked up 2 cards . The first one shows The Bridge of the Americas. It crosses the Canal at Balboa, near Panama City. 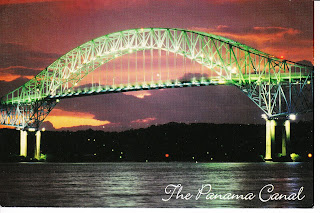 Completed in 1962 the bridge connects the North and South American land masses and is a part of the Pan-American Highway. The stamps I used here are from 2010 and are part of a beautiful bird set. 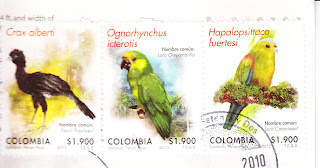 The others in the set are coming up later on another card. The second card from Panama shows 3 scenes of ships passing thru the locks of the Canal. 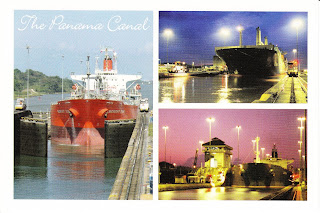 I hope I'm not losing anyone because of the length of this update. I really didn't want to break it up , but the cruise was a long one, 15 days . So, bear with me, please.
After clearing the Canal and sailing into the Atlantic, we arrived at Cartagena, Colombia. Cartagena is a really nice city. The colonial architecture is quite impressive and so is the eleven kilometer wall around the city. Built to withstand pirate attacks, hundreds of years ago, it is really something to see. You can see the wall and a clock tower on the first of 3 Cartagena postcards. 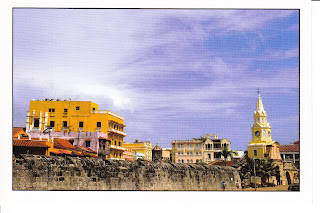 The wall and the San Felipe Fortress are the reasons Cartagena was added to the UNESCO World Heritage Site List in 1984. The second card shows the Don Blas de Lazo Monument at the bottom of San Felipe Castle. He successfully defended Cartagena against the English in 1741. The 3 stamps I used on this card 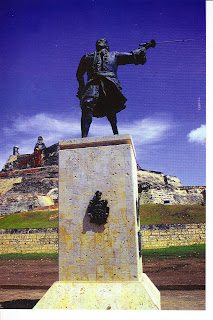 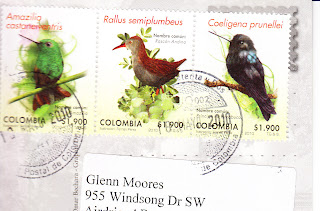 My final card from Cartagena is one again showing San Felipe Castle , but from another view. This one has a sculpture of a pair of large boots , 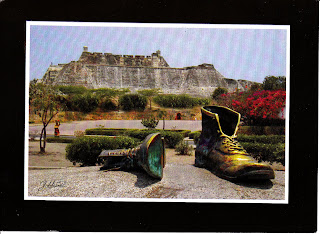 After departing Cartagena, we made for George Town, Grand Cayman, Cayman Islands.
Again, we located the post office , as you can see from the photo. 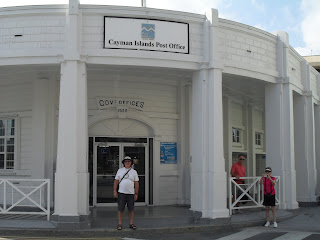 It was great to be able to buy some stamps there, just as I did in Cartagena, Puntarenas and Acapulco. While on a tour, we ended up on Hell Rd, as you can see. 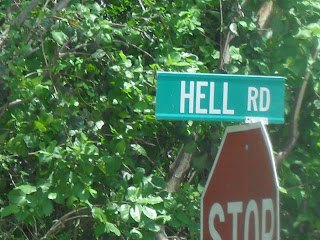 This led us to Hell, Grand Cayman. I always knew there was a chance of my ending up in Hell, but I didn't expect it so soon. As seen in the picture, the Hell Post Office is a little run down, 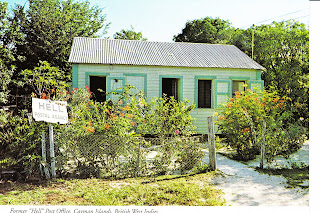 but you can still mail your cards from Hell, which is the important thing.
The stamp I used in Hell is from a 2009 set of 6 showing different Cayman Island views. Note the Hell postmark. 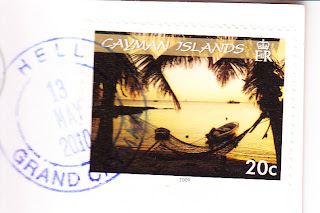 After leaving Grand Cayman, we sailed on to Tampa, Florida and then Mobile, Alabama where we disembarked.

Well, that was my cruise. I hope you enjoyed my postcard recollection of it and that it wasn't too, too long. It was great , we had a great time and I picked up some great postcards and stamps along the way. What more could a man want ?

Take care and as always your comments are welcome.

Remember, tomorrow's update will be a good one, but much shorter.
Posted by Gem from Airdrie at 1:59 PM

Loved the update and loved the cruise you had had....great to go on the journey through postcards :)
And Acapulco arrived today! Now that I compare it to the actual journey, I see Acapulco got a bit lagged behind, but it still arrived safe and sound and in perfect condition! Thank you so much!!!
Uhmmm...Colombia...should I read between the lines here? *blush* :P

Extremely curious to see what the next post is all about :)

I followed this link from your newest post - I don't remember seeing it at the time! I must not have saw it then - I would definitely remember the charming post office at Hell! Look forward to a similar post about the most recent cruise - hopefully the missing cards will arrive soon!