3 New Countries and Other Cards

I am writing today about the postcards I received on Thursday and Friday past. Included in those cards are 3 new additions to my collection. They make countries #188, 189 and 190. These are the first additions , country wise, since back in May. June 2008 was the first month that I did not receive a new country postcard since I started collecting back in March of 2006.
First up is Libya, country number 188. I previously had received 2 stamped cards from Libya, but they were not postmarked. They were sent from The Libyan Embassy in Canada. This new card is direct from Tripoli, Libya, sent by The Corinthia Bab Africa Hotel. Libya is officially the Great Socialist People's Libyan Arab Jamahiriya. Located in North Africa it is the fourth largest country in Africa, with 1.8 million square km, 90% of which is desert. It's capital is Tripoli and the country has a population of 6.1 million. The Flag of Libya is the only national flag in the world with just one color and with no design or insignia. 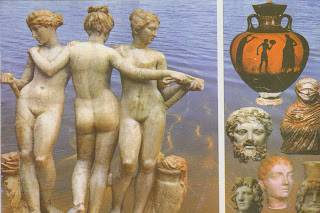 The card has 2 pretty nice stamps showing building types. Unfortunately , I couldn't find anymore about them. 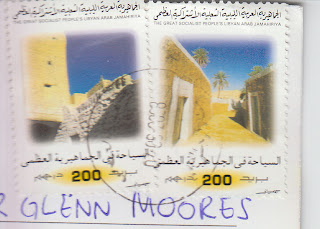 Next postcard is from The Marshall Islands, The Pearl of the Pacific. It was sent by the Marshall Islands Visitors Authority, in Majuro.The stamp is 1 of a set of 4 featuring flowers and plants. It was issued in 2006. 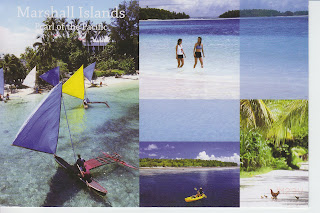 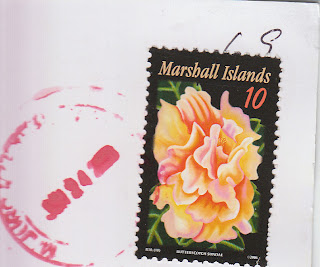 Another card was from Norway. It was sent by Postcrosser Bente A. The card shows Sognefjorden, the world's second longest fjord. It extends more than 200 km inland. It is 72 km from Bergen. Cliffs surrounding the fjord rise almost straight up from the water to heights of 1000 m and more. Bente used a stamp from 2008, 1 of a set of 6 promoting tourism. 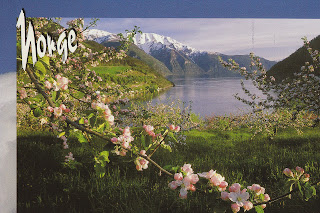 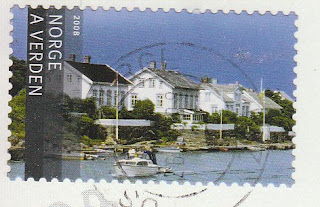 Another new addition to my collection, #189 is a card from Cocos (Keeling) Islands. I received it from The Cocos Islands Tourism Association. Cocos (Keeling) Islands is a territory of Australia. The islands are located in the Indian Ocean, about half way from Australia to Sri Lanka, or 2750 km north-west of Perth and 900 km west south-west of Christmas Island at 12 degrees 07 min S, 96 degrees 54 min E. Captain William Keeling was the first European to see the islands in 1609. A couple of interesting facts about the islands- the highest elevation in the islands is 5 meters and Cocos (Keeling) Island is located on almost exactly the opposite side of the globe as Cocos Island , Costa Rica. The 2007 population of the islands was 596 . The postcard shows Cocos Island's Jukongs. Jukongs are a traditional Cocos Malay sailing craft. They were once the main means of transport on the shallow lagoons. They are now used for ceremonial purposes during festival times. 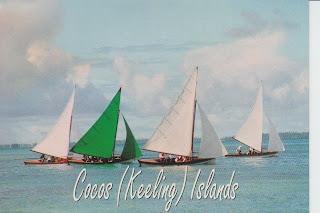 A little about the stamps on the card. Of course I was hoping for Cocos Islands stamps but the sender saw fit to use 3 Australia stamps. I'll still try for another card with Cocos stamps. The stamps include a 1994 issue , 1 of a set of 3 featuring crocodiles, and birds. A saltwater crocodile is on the stamp in question. The other stamps used are from a set of 12 , issued in 2007, issued for Zodiac signs. The stamp shown is for Gemini and says Geminis are curious and impatient. Gemini is my sign and I wonder if that is correct. Perhaps my sons who read this blog can say if that is correct. 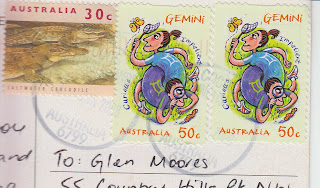 The final card for today is from Ohio, U.S.A. It was sent by Linda T of Barberton, Ohio. She writes that she reads my blog, enjoys it so much that she has subscribed to it. Let's hear it for Linda. The card show a number of lighthouses , 6 in fact, on Lake 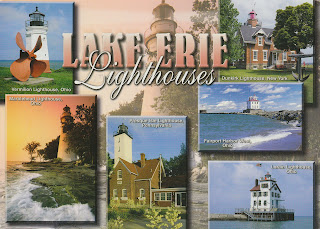 Erie, the shallowest of the Great Lakes. Linda used 2 Star Wars stamps from the set of 15 issued 25May2007. These show Emperor Palpatine on one and Princess Leia Organa and R2-D2 on the other. I now have 5 of the 15 Star Wars stamps. Thanks Linda and keep reading. 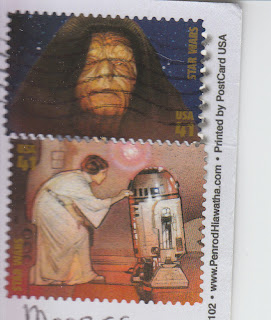 I mentioned new country #190. Well that happens to be Reunion Island. I wrote about this card and its stamp in my blog of Jan 24, 2008. Why I am just adding it to my collection will remain a mystery to all but me. By my count I now have 62 more countries to go .

That's it for this time. I am looking forward to what the mail brings this coming week.

Parker, how did I do this time with Star Wars?
Posted by Gem from Airdrie at 2:41 PM

Hello ! I like the postcard of Lybia , this is exactely the postcard I would love to receive a postcard like that ( I love ancient history ).

PS : If you want another postcard from my region just tell me ( write a comment on your blog )

Yes, both are correct. Bloggers across the galaxy appreciate it.