Here is a small update with just 3 cards. Small because time is of the essence. Later all my family and their families will be here for supper. So the house will be full . We should get in a few games of pool and then there is a very important hockey game on television, not to be missed. What's on the menu, you may ask ? Atlantic salmon , along with cod tongues. Ah, cod tongues, I can't wait. I'm sure that if cod could use their tongues to talk, they might ask you why anyone would want to eat them.Unlike anything in the seafood world, the tongue of the Atlantic cod (actually a gelatinous bit of flesh from the fish's throat) is an acquired taste. But tonight in Alberta and in Newfoundland - where they say the cod were once so thick you could walk across the bay on their backs - it's a local delicacy as iconic as moose nose or seal-flipper pie. With these coveted little morsels on the menu - lightly battered and fried, topped with the traditional scrunchions (crispy bits of salted side pork) supper will be indeed a delight. Now that I've made you all hungry, let's get back to the topic at hand , postcards.

I open with a card from Macedonia. Ana of My World of Postcards sent it along. It gives us a look at the railway track in Ovche Pole. Ovche Pole is a plain in the east-central part of Macedonia. 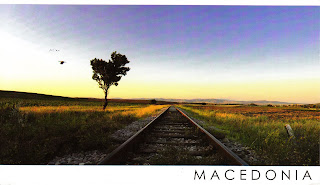 The climate of the plain is hot, dry summers and cold winters. Often called "the windiest place on the Balkans " , strong winds are present for most of the year. It is also one of the driest areas in Europe. Even though Ana says the overall effect of the postcard for her is a sense of calmness, and I can see that , I'm sure there are days on the plain that are just the opposite. My thought on the card would be " am I early or late for the train ? " Ana topped off her railway related card with a train stamp. It is 1 of a set of 2 issued in 1998. 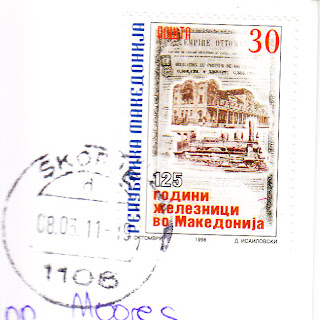 My next card is the result of a private swap with Valentina in Moscow, Russia. The card is a 1935 picture of Russian Ballet star Irina Baronova, in Paris. 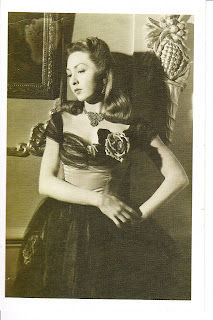 Baronova was the mother of film and television actress Victoria Tennant, who was at one time married to actor SteveMartin. Valentina writes that this card is one of her favorites. Moving on to the stamps. First I want to show the stamps that I usually receive on cards from Russia. They almost always are these common definitive types . Dull and boring if you ask me. 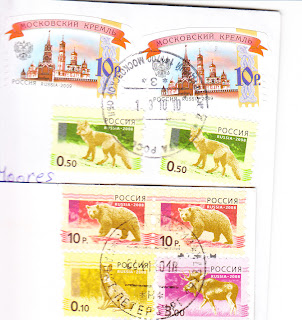 Not this time though, thanks to Valentina. She must have went out of her way to use great stamps . Have a look.

The last card for today comes from Koper, Slovenia. Koper is a town in southern Slovenia on the Adriatic Sea. Sonja sent this card showing the city of Piran. The city resembles a large open-air museum, with medieval architecture and a rich cultural heritage. 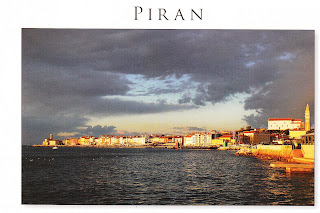 Narrow streets and compact houses give the town its special charm. Piran is the administrative centre of the local area and one of Slovenia's major tourist attractions. The card shows us a beautiful evening view of Piran with the Church of St. George in the topright. The church, the most remarkable building in the city, dates from the 12th century. The present building was completed in 1637. The bell tower was built in 1608 and is a smaller copy of the famous tower bell of St. Marcul in Venice. Sonja used flower definitives but from different years. 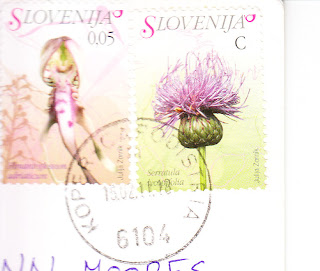 I think that will do it for this time. Take care. See you soon.
Posted by Gem from Airdrie at 11:27 AM

And the cod tongues were good! Thanks to the chef (Mom)!