A Sailing Ship, The Eden Project, A Sunset Beach, and a Map

Well, it's Saturday and I think I need to get another update in here. This past week was quite a successful week, postcard wise. I received a total of 15 cards, not a bad week at all. Today's cards come from Norway, Great Britain, Poland and The Philippines. All are from fellow Postcrossers except for the Philippines card. That one comes from a cover collector who has enjoyed this blog.

The Norway card is compliments of Kas. The card shows us the three masted basque Statsraad Lehmkuhl of Bergen .

Built in 1914, it is operated by The Statsraad Lehmkuhl Foundation but quite often serves as a training ship for the navy. At other times it can be chartered for cruises. Kas used a couple of stamps including a 2010 stamp honoring P.A. Munch, a Norwegian historian.

The definitive is from 2002. Looking at the stamps of Norway in my catalogue , I found some very nice stamps. Maybe I should start collecting them, or at least swapping postcards with someone from there. This would increase my Norway collection. Perhaps a project for the new year.

The Eden Project is next. I have to admit here, that I have never heard of this project. The Eden Project occupies a 125 acre site devoted to protecting endangered plant species from around the world. 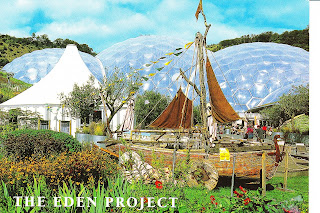 It houses many thousands of species from different climatic zones , or biomes, in giant domed conservatories, including the world's largest greenhouse. This rich global garden , near Cornwall, United Kingdom attracts over a million visitors every year. Also located on the grounds of the project are many sculptures made out of driftwood, including this yacht shown on the card. The stamps used on this card include 2 Machin definitives from 2010 and 1 of the 7 Christmas stamps , also issued this year.

Card # 3 , from Poland is a homemade card containing a picture taken by the sender. A one of a kind postcard for my collection. It is a beautiful sunset beach scene taken in Debki. 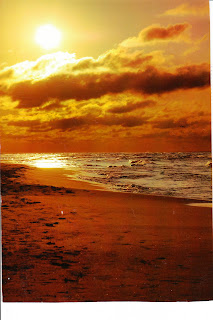 This little village with a population of about 165 has one of the most beautiful stretches of coastline in all of Poland. It is located in northern Poland, 25 km NW of Puck, where as a Canadian , I hope a hockey game breaks out every now and then. Looking at the stamps , we have 1 of 2 Christmas stamps issued in 2008 and a 2005 stamp celebrating Sieradz, one of the oldest towns in Poland. 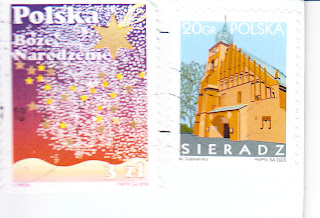 Next is the map card of The Philippines. I'm not really a lover of map cards but I know there are many out there who collect them. What can you say about map cards, they say it themselves. But when someone takes the time and sends you one, then I appreciate it and view it as a good opportunity to add a few stamps to my collection. 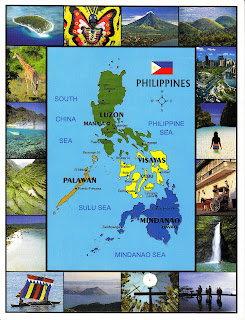 Ralph sent this card and he used 2 great stamps from 2010. They are from a set of 4 featuring beetles, not to be confused with The Beatles, the Fab Four. These stamps were also issued as a beautiful souvenir sheet. 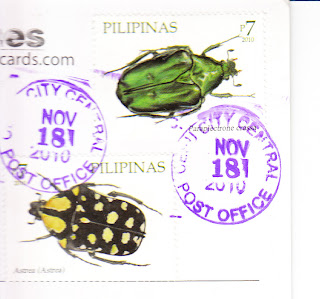 As mentioned above Ralph collects covers and I think I'll be able to put together a nice cover for him as a thank you for this postcard and stamps.

Thanks to all who sent these cards. It was a great week and I still have six more cards to go. Hopefully , I'll be able to squeeze in another update tomorrow. Take care and as always , your comments are welcome.
Posted by Gem from Airdrie at 11:55 AM

havent heard about the Eden Project either, but definitely seems very interesting! thanks for sharing!!!

It's me Ralph from the Philippines

You really have a wonderful blog and a great collection!