Hey there. I'm back with a few more cards that arrived the past few days. This time I have one from France and two from Spain. Let's start with this one from Seville , Spain. It's a look at The Cathedral of Saint Mary of the See, commonly called Seville Cathedral and La Giralda tower. This Roman Catholic cathedral was built between 1401 and 1528. It is the 4th largest church in the world. It was added to the UNESCO World Heritage List in 1987. The bell tower, perhaps the city's most well known symbol, is 104.5 m high. The Giralda is the former minaret of the mosque that stood on the site under Muslim rule. 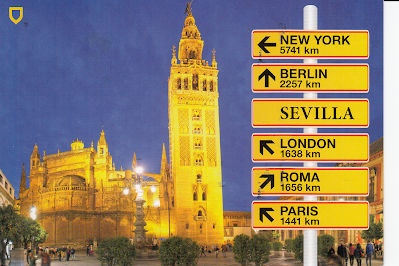 My second card is a look at an old fountain in Bonnieux, a commune in southeastern France. This fountain in the square of Bonnieux is one of several located among the 19th century houses, ancient stone walls and medieval fortifications of the town. 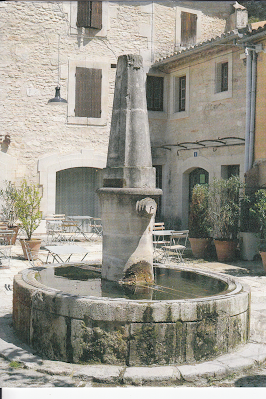 Dominique used a fairly old stamp on this card. It was issued in 1974 and I remember that year well. My Lovely Teena and I were married in 1974. The stamp was issued for the opening of Charles de Gaulle Airport. This stamp with the Concorde flying over the airport will be a nice addition to my Aviation stamp collection.

Here now is the last card for today. It's a small look at Pals, a beautiful Medieval village in northern Spain in Catalonia region. The tower on the postcard was built between the 11th and 13th centuries. Known as the Tower of the Hours , it is a 15 metre high clock tower. 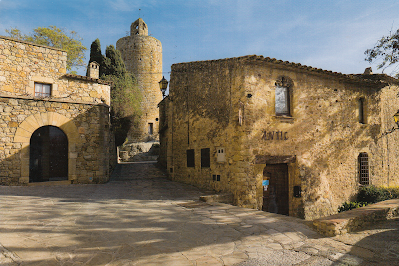 This card was sent by Josep & Assumpta and it arrived with two stamps from 2020.

The left stamp is 1 of 2 issued to celebrate the 6th DiSello Competition, a National Stamp Design Competition.The larger right stamp is 1 of 3 showcasing Museums. Shown is the Museum of Human Evolution , located in Burgos, Spain.

Josep & Assumpta have a great postcard blog and you can check it out right here.

Well that's my blog for today. Thanks for today's postcards go out to Jean Pierre, Dominique and Josep & Assumpta.

I have exhausted my cards now and will have to wait for a few to arrive. Good luck to me on that.

See you soon, but before I go --- wear a mask, wash your hands and keep your distance. That way, it's not only yourself you are keeping safe, but others too. Remember we're all in this together.

Posted by Gem from Airdrie at 3:23 PM

Packers and Movers Bangalore as a Services providing company can make all the difference to your ###Home Relocation experience. Bangalore based Company which offers versatile solutions, Right team that easily reduce the stress associated with a ✔✔✔Household Shifting, ***Vehicle Transportation. we help things run smoothly and reduce breakages and offer you seamless, Affordable, Reliable Shifting Services, Compare Shifting Charges. @ Packers And Movers Bangalore