Today it's a bunch of cards based on no particular topic. Let's start with this card from France. It's a great look at Le Cap Blanc-Nez. This is a cape on the Cote d' Opale in northern France . The cliffs of chalk , rising to 134 m , are quite similar to the white cliffs of Dover at the other side of the Channel in England. 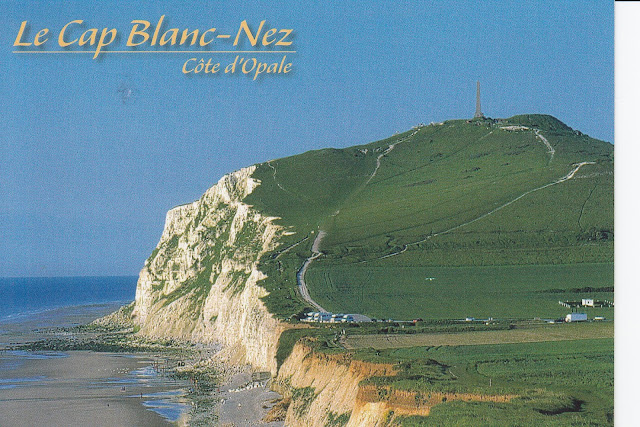 Elodie used a 2019 stamp celebrating 130 Years of the Eiffel Tower. 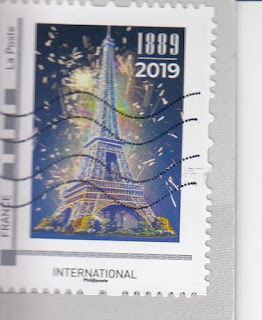 My next card and stamp actually is a reproduction of an oil painting from 1562. The painting is called The Fall of the Rebel Angels and is is located at the Royal Museums of Fine Arts of Belgium. It was painted by Pieter Bruegel the Elder. 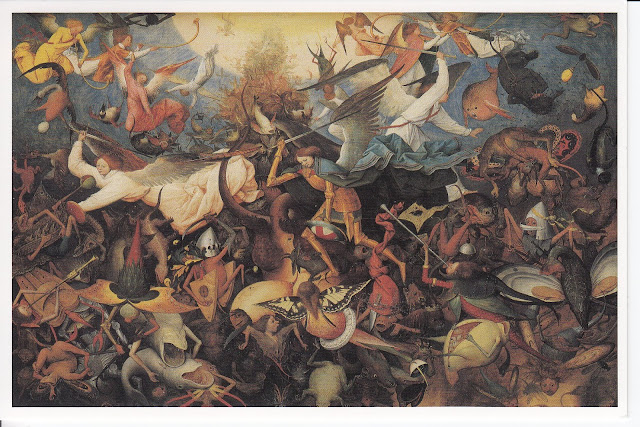 Johan used a stamp exactly like the postcard and exactly like the painting. It was issued this year, 2019, which is the 450th Anniversary of the dealt of Pieter Bruegel the Elder. It is 1 of 5 different stamps in a minisheet. 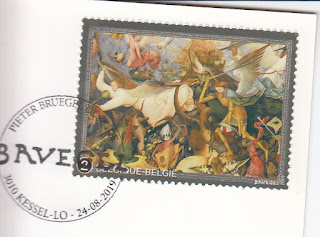 Today's second card is from Kosice in eastern Slovakia, close to the Hungarian border. It's a look at the Museum of Aviation located there. The museum has over 60 types of civilian and military aircraft from various periods and countries. They include MiG -15, MiG-21 fighters and SU bombers. 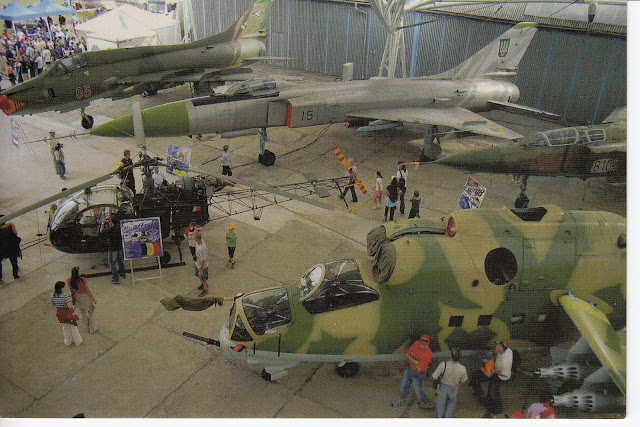 Berta used a very attractive ( at least in my mind ) stamp from 2018. It shows an Ottoman Manuscript from the Basagic Collection. It was a Joint Issue with Turkey. 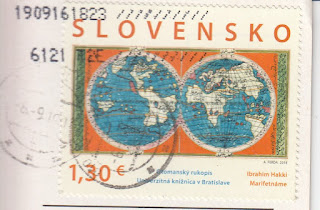 This next card arrived from Luang Phrabang, a province in the north of Laos. It shows a photo by Michel Huteau of Wat That Chomsi, built in 1804. The temple is found at the top of Mount Phousi and if you want to go, you'll have to climb 328 steps. 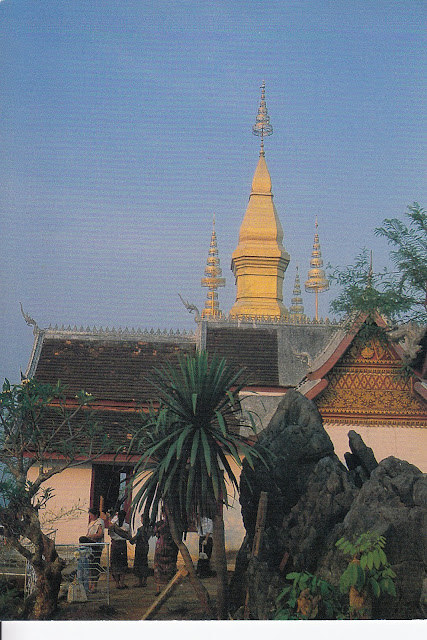 Jobbo used a stamp from 2016 showcasing a Lao Traditional Wedding. 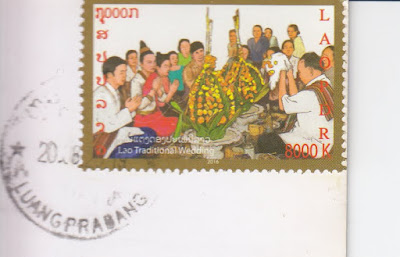 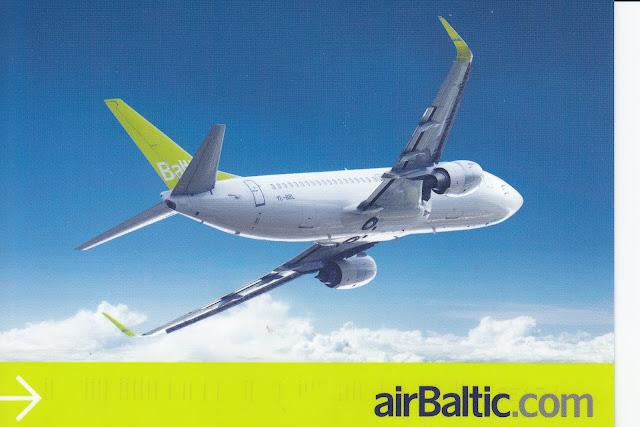 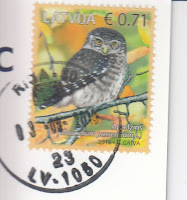 I think it's time for a bridge card now. This is the Pont de Pierre or Stone Bridge. It is found in Bordeaux, France crossing the Garonne River. It was built between 1819 and 1822 and has 17 arches ( the number of letters in the name Napoleon Bonaparte ) , under whose orders it was planned  and designed. Interesting note about the bridge -- the bridge and its tide is an important point in the Itineraire a Grand Gabarit, the logistic schedule transporting parts for the Airbus A380 production. 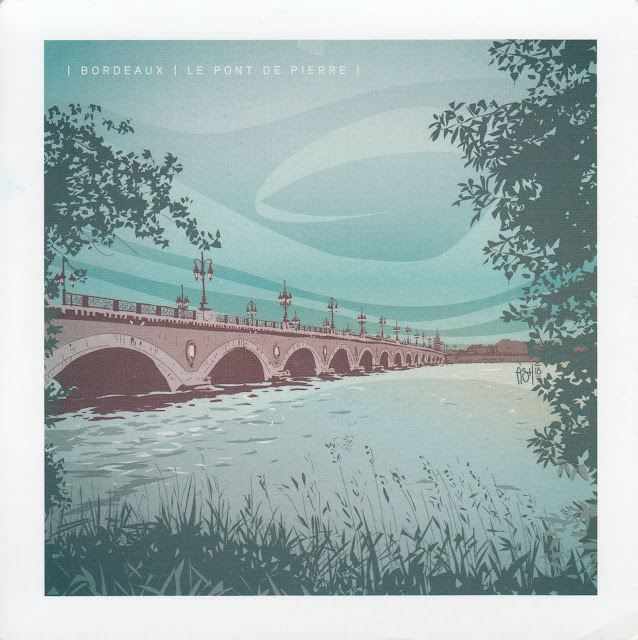 Marie used a find selection of 4 stamps on her card. I'll work from left to right. The far left stamp is 1 of 4 in a Star Wars set issued in 2017. This one shows Luke Skywalker. The set were issued as Augmented Reality stamps and seem to come alive when scanned with a smart phone after the download of a special app. They were  issued to mark the 71st Autumn Philatelic Salon in Paris. The next stamp is from a booklet of 12 Flowers issued in 2016. Next , from 2019, 1 of 6 in a Sports minisheet. Last, on the far right, from 2018, 1 of 8 in a Tourism - Vacation in France set.

Up next is Drachenfels or Dragon Rock - medieval ruins located near Bonn. The area offers great views of the Rhine River Valley  .
Legend has it that a fire-breathing dragon lived atop the rock and he spent his time terrorizing residents of the surrounding villages. That is until he was slayed by a local hero. 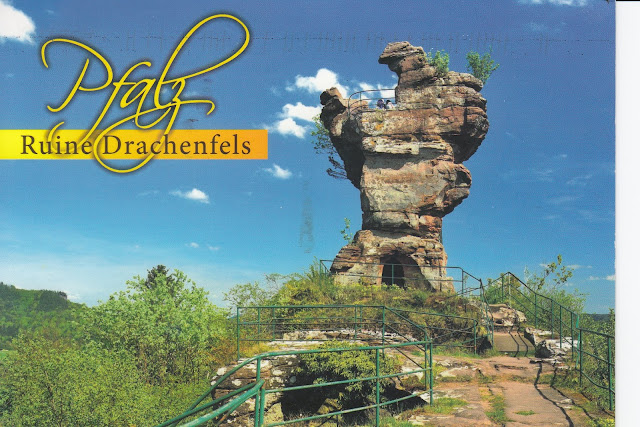 Dominique used a Flower definitive along with a 2019 Microworld Palladium Chemical Element Stamp. 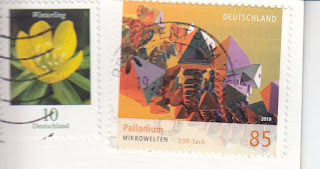 That ends another blog update . Thanks for cards this time go out to Berta, Johan, Elodie, Jobbo, Jean Pierre, Marie and Dominique. See you next time.

Posted by Gem from Airdrie at 6:06 PM

Hello Guys I am Mahi Chopra to offer you a reasonable and fair Escorts Service in Mumbai. I am 23 years old young Independent mumbai escorts who is waiting of your phone call. I am well in behaviour and provides you unlimited mumbai escorts service. Would you like to meet to me in any private place? Call me for booking.