Hello to all. Time for a few more postcards.

My first card today is a look at Belgrade at night. The city is the capital of Serbia and also its largest city. Jean Pierre's card shows the view on the Sava River and an old part of Belgrade with the lighted Cathedral Church of St. Michael the Archangel. 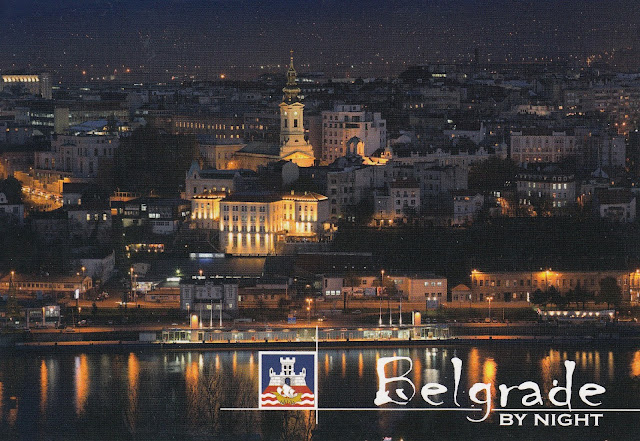 Jean Pierre used a nice Aviation themed stamp along with one other. On the left is a stamp issued in 2017 celebrating the 90th Anniversary of the Serbian National Airline - Air Serbia formerly Jat Airways.  On the right is a 2006 stamp showing the Serbian Flag and Coat of Arms. 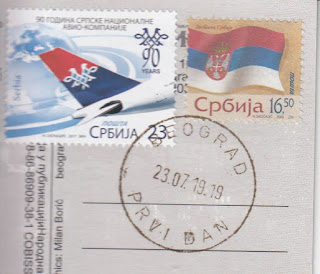 Speaking of Jat Airways, one of their DC10-30 aircraft is the subject of today's second card. Registered as YU-AMB it is photographed at Charles de Gaulle Airport in Paris in July of 1996.  This aircraft entered service in 1979 and flew for 27.3 years. It was finally scraped in 2005. 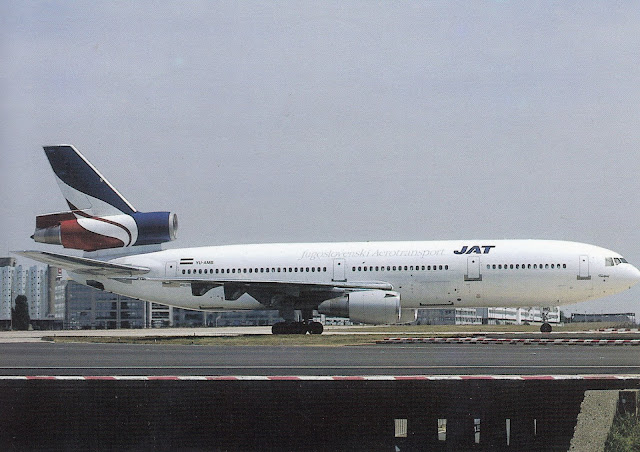 This one arrived with the same Aviation themed stamp as the previous card.

Its a lighthouse next. Point Moore Lighthouse  in Geraldton, Western Australia.    This light stands 34 metres high and was the first all steel tower built on mainland Australia. Point Moore was lit for the first time on 19 March 1878 and has been in continuous operation since. 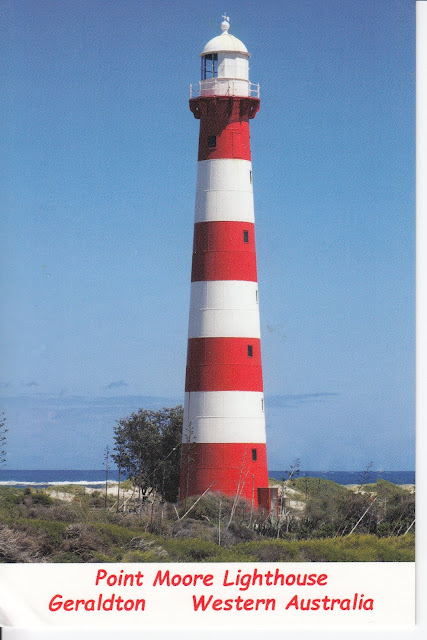 Yuan used a stamp from 2018 showing the skyline of Melbourne. It is 1 of 3 in a set showcasing Beautiful Cities. 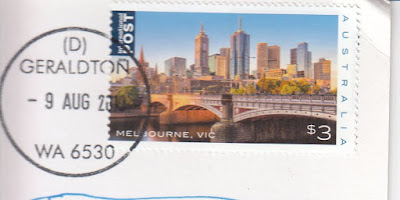 Always great to get a superb postmark.


Here now are two cards sent by Dominique, the first from Galway City, Ireland and the second from Carcassonne, France.

Galway is a harbour city on the west coast of Ireland. It will be the European Capital of Culture in 2020 , along with Rijeka, Croatia. 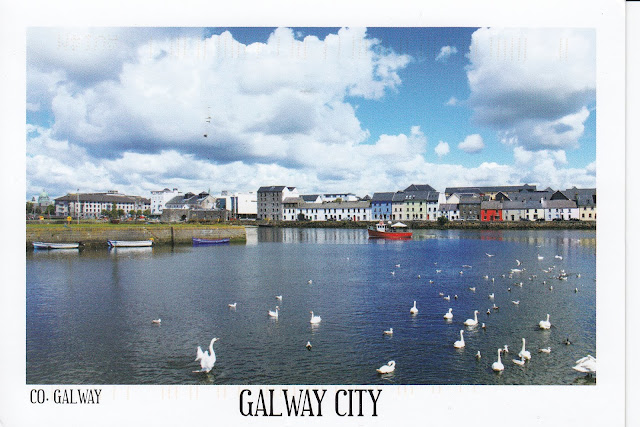 Dominique used 2 Definitives from the 2018 History of Ireland set. 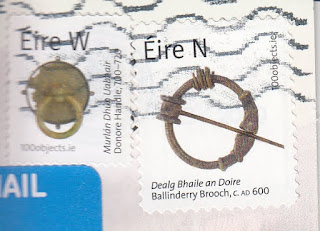 Dominique's French card is a look at La Cite, the medieval citadel in Carcassonne with all its watchtowers and double-walled fortifications. It was put on the UNESCO World Heritage Site list in 1997. 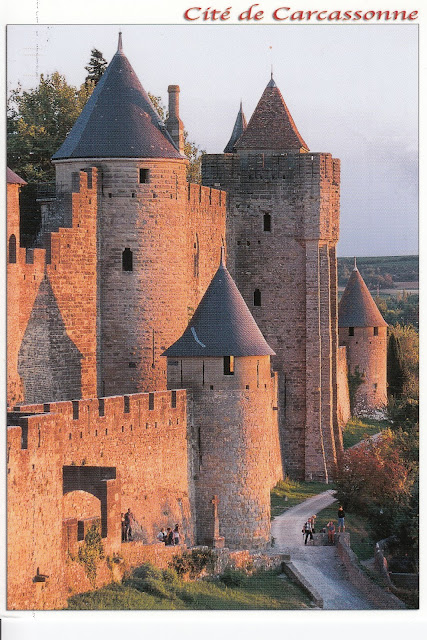 The stamp used here is from 2016 and celebrates Georges Charpak, French Physicist and Nobel Prize winner in 1992. 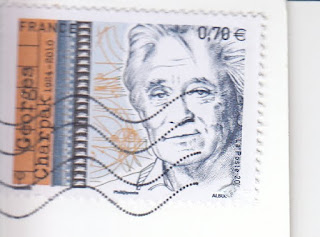 My next card is from Portland, OR, USA - quite near, only 1267 km to the west. It's a look at Tom McCall Waterfront Park on the Willmette River .  McCall was an American politician, journalist and Governor of Oregon. 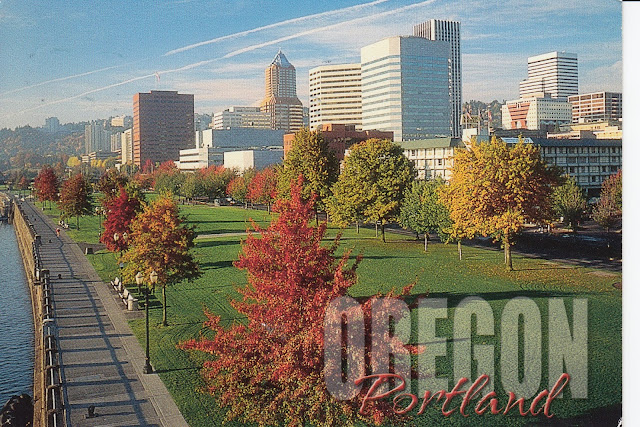 David used 2 recent Forever stamps from earlier this year. They are 2 from a set of 16 celebrating the 50th Anniversary of the TV Series Sesame Street. Shown are Mr Snuffaluffagus and Zoe. 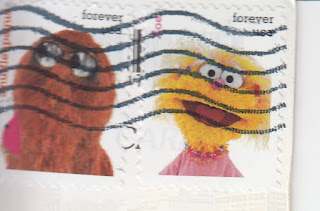 These are not my favourite topics for stamps but I'm sure they would be very popular with young people entering Stamp Collecting , if any are.

David has a great postcard blog and you can find it right here .

I have just 2 more cards for this time, so hang in there.
Here's a card form Saigon, Vietnam and what do you see ? Motorbikes, motorbikes and more motorbikes. The traffic in Ho Chi Minh City or Saigon  seems to have a mind of its own and can be a real nightmare for visitors. I know , it sure was when we visited there a few years ago. Ho Chi Minh City has a population of just over 8.4 million people and has 7.43 million motorbikes. We won't even mention the 5 million motorbikes just up the road in Hanoi. It's just madness ! 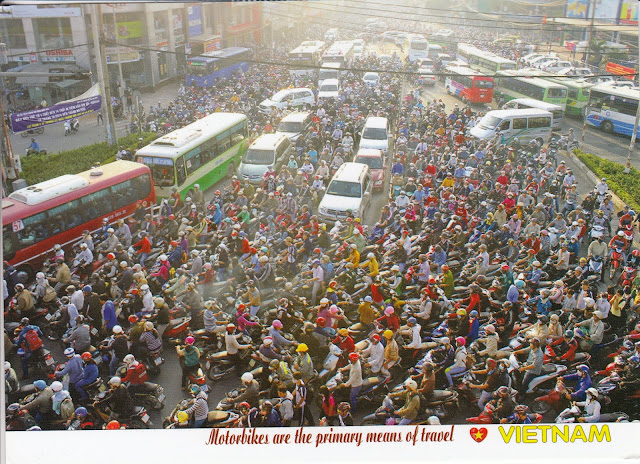 Jobbo used a number of the 2019 Vietnamese Silk Paintings set.

And the last card is : from Serbia. It's a great look at the five Sava bridges in Belgrade at the confluence of the Danube and Sava rivers. 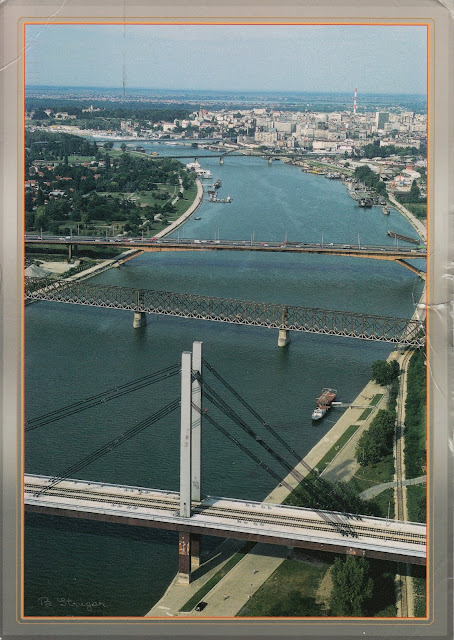 Jean Pierre used 3 stamps on this card, 2 of which we have looked at already.  The other one , the middle stamp was issued in a set of 4 in 2016. They celebrated UNESCO World Heritage Serbian Monasteries. 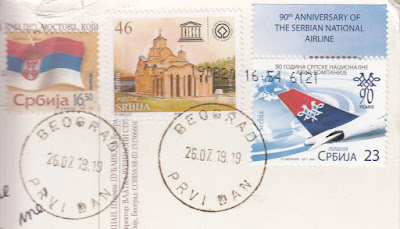 That's it for this time. Thanks for the cards going out to Jean Pierre, Jobbo, Dominique, David, and Euan. Hope you enjoyed seeing these great cards and stamp. That's what it's all about. Take care.
Posted by Gem from Airdrie at 12:05 PM