Back Live On The Blog

I'm back live after quite the hiatus. My last real update here was 29 Feb, more than a month ago. I have been away from Alberta, from Canada for most of that time. I left Canada on 04 March and just returned yesterday. I traveled to Chile, Argentina, The Falklands Islands , Uruguay and Cuba. I cruised to all of them except Cuba. I took a flight there. Of course I sought out and purchased postcards and stamps all along the way. If you are on my mailing list , watch your mail and maybe you'll get lucky. And yes, I sent cards back to myself and when all the postcards finally arrive, I'll do another installment of Cruising Thru Postcards, it will be number 3. I had a great cruise through the South Atlantic waters and then later a week in Cuba. All in all I posted 69 postcards and the only place I had any trouble was Cuba. I should have known from my two previous visits. But I'm getting ahead of my self. I'll get to that in due time.

Of course, while I was away postcards did indeed build up in my mailbox. Sixty three (63 ) cards in total. I now have lots to show and blog about. There are some recurring themes such as planes and aviation, mail/post boxes, Indonesia, city views ,buildings and a few others. I may just show them that way for a change, have a number of theme days. I think I will start with the Indonesia cards , ten in all. The first seven are from David who hails from Ireland but was traveling in that country and the last three are from Erick who lives in Indonesia. So here we go.

Card # 1 - On this one we see a couple of Sumatran Orangutans. The Sumatran Orangutan (Pongo Abelii ) is one of two species of orangutans. Found only on the island of Sumatra, Indonesia it is rarer than the Bornean Orangutan. The conservation status of Pongo Abelii is Critically Endangered. David used two stamps from 2009 on this card. They are 2 of a set of 11 showing Provincial Emblems.

Card # 2 - Here we have a good look at the traditional floating market in Banjarmasin, South Kalimantan, Borneo, Indonesia. That's a lot of hats on those ladies. The hats are a traditional headware, made from bamboo. 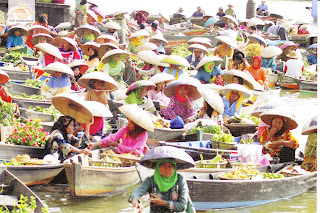 This postcard arrived with a beautiful Indonesian Year of the Dragon stamp. It was issued on 15 Jan of this year. I do believe it is a single stamp from a spectacular souvenir sheet. 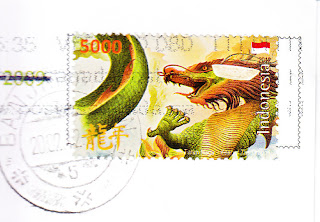 Card # 3 - It comes to me from Borobudur, site of a 9th century Buddhist Monument in Magelang, Central Jave, Indonesia. There are a total of 504 Buddha statutes on the site. 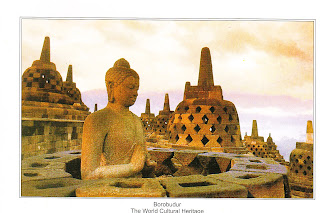 The Borobudur Compound was added to the UNESCO World Heritage Site list in 1991. Now the stamps - the one on the left is from 2011, 1 of 4 in a Fish Consumption Promotion. The one on the right was issued in 2001 and is from a set of 8 Flower Greetings stamps. 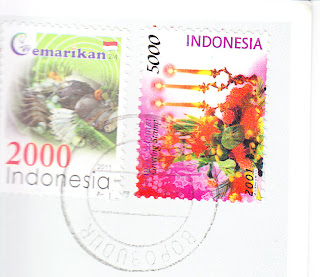 Card # 4 - This one gives us a look at a statue of Chr. M. Tiahuhu, located in Ambon City, the main city, seaport and capital of Maluku province in Indonesia. 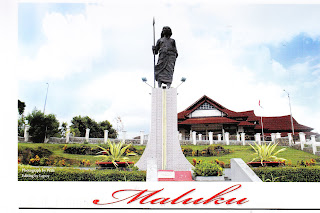 The islands here were historically known as the Spice Islands, for the nutmeg, cloves and mace found here. Not to be confused with Grenada, The Spice Island. David used another of the 2001 Greetings stamps on this card as well. 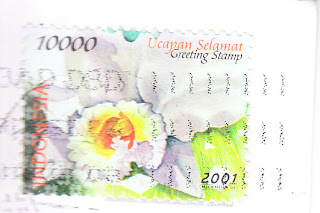 Card # 5 - Fabled Tana Toraja, where phenomenal funeral ceremonies draw visitors from around the world. The card shows a few grass covered structures in Lemo, a traditional Torajan village in the highlands of South Sulawesi. 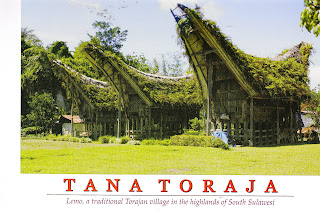 A nice block of four with a nice socked on the nose cancel can be found on this card. The stamps were issued in a 2011 mini sheet of 8 different stamps highlighting Traditional Textiles. 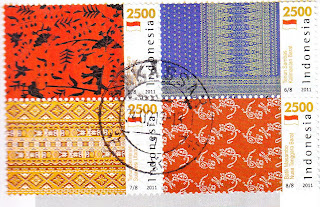 Card # 6 - Another Indonesia card, this time from Baliem Valley, Irian Jaya , on the island of New Guinea. It gives us a look at a spear wielding Dani warrior set for tribal battle. 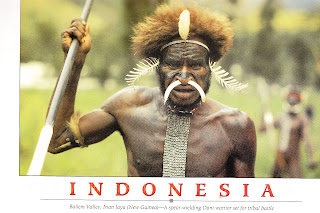 I'm sure he's a tough and fierce warrior but getting that large a bone through his nose still had to hurt. The Dani are a people from the central highlands of western New Guinea ( the Indonesian province of Papua ). David used a great block of four from 2011 celebrating 50 years of Tahun Trikora. 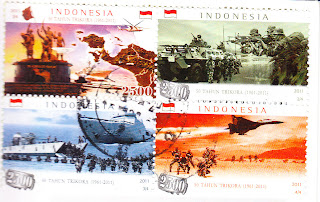 Card # 7 - The last of David's cards. It's Bali this time, showing the sacred temple of the volcanic lake, Pura Ulun Danu, at Bedugul. 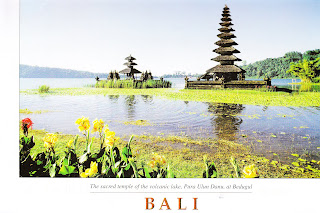 Built in 1663, the temple is used for offerings to the Balinese water, lake and river goddese Dewi Danu. On this one David used 2 copies of each of the 2011 issue of 2 Forests stamps. 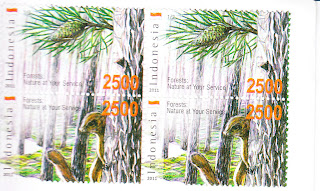 Card # 8 - Erick's first card , actually all 3 of his cards, show life and scenes from the island of Bali. This one show a long line of women and girls in custom dress carrying their offerings in procession to the temple. 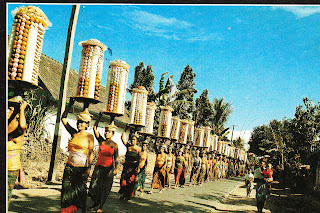 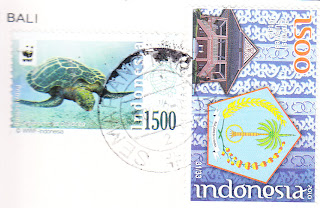 Card # 9 - Erick's second card shows a group of men taking part in the Barong Dance of Bali. Here's the skinny on Barong. 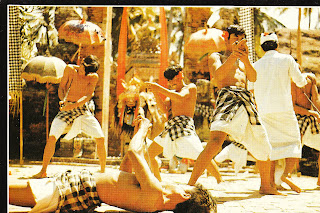 Barong is probably the most well known dance. It is also another story telling dance, narrating the fight between good and evil. This dance is the classic example of Balinese way of acting out mythology, resulting in myth and history being blended into one reality.

The story goes that Rangda, the mother of Erlangga, the King of Bali in the tenth century, was condemned by Erlangga's father because she practiced black magic. After she became a widow, she summoned all the evil spirits in the jungle, the leaks and the demons, to come after Erlangga. A fight occurred, but she and her black magic troops were so strong that Erlangga had to ask for the help of Barong. Barong came with Erlangga's soldiers, and fight ensued. Rangda casted a spell that made Erlangga soldiers all want to kill themselves, pointing their poisoned keris into their own stomachs and chests. Barong casted a spell that turned their bodies resistant to the sharp keris. At the end, Barong won, and Rangda ran away.

Somebody can die or get seriously injured in a Barong dance. It is said that if Rangda's spell is too strong, a weak soldier may not be able to resist it, even with the help of Barong. He may end up hurting himself with his own keris.

The masks of Barong and Rangda are considered sacred items, and before they are brought out, a priest must be present to offer blessings by sprinkling them with holy water taken from Mount Agung, and offerrings must be presented. Two of 3 stamps in a 2010 set of 3 highlighting Environment Protection were used on this card. 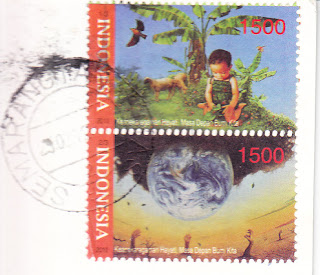 Card # 10 - The final Indonesia card for this time. It gives us a look at the natural and traditional public baths at Sebatu. 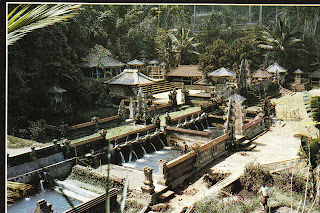 Erick used another of the WWF Sea Turtle issue along with another copy of the Provincial Emblem issue. 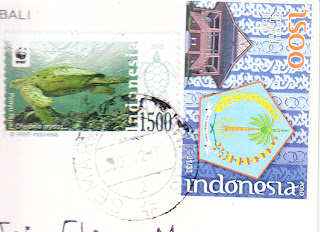 So ends my Indonesia update. 10 cards is a lot, one of my larger updates for sure. It feels good to get this first update in over a month up and online. Hope there is still someone out there reading me, after such a long drought. A really big Thank You to David for his card and also thanks to Erick for his. Enjoy and drop by again .

Welcome back! Your trip sounds great fun. And the card you sent me from Uruguay arrived safe and sound, too. Thanks very much!

Wow, it sounds like it must have been a wonderful trip! I am looking forward to seeing your post about it!

You have provided very good information and it is very valuable. It is very useful for people to read about such information. Thank you so much for this
Maryland Postal Code

Many people will get lot of benefits by reading such kind of informational stuff .Thank you so much for this .
solan pincode