I made it, I'm here as I said I would be. Two days in a row looks good. I got some good news yesterday. Way back on 06 Oct I sent a cover with some postcards to a friend overseas. The cover was franked with a very special stamp. I had given up hope that it was going to reach its destination, but yesterday I received email confirmation of its arrival. It arrived in good shape after 2 full months. Where has it been, who knows ? But it's finally arrived , that's what counts.

We begin today with a really nice card, in my opinion of course. I guess I have a bias , too. It will be part of my Airlines /Aircraft on Postcards collection. It is an old card advertising KLM's Golden Circle Service of the 1950's. It shows a KLM Lockheed Super Constellation L 1049 aircraft. 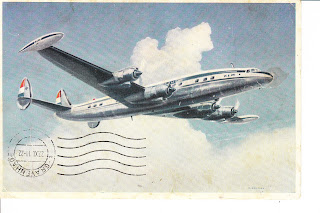 A Gem of an airplane. Super Connies were introduced in 1945 and flew until about 1990. Dutch Postcrosser Marleen found this card while rummaging around in an antique shop. She used one of the Postcrossing stamps issued back in October. I'm not showing it as it is one that I have previously shown. Thanks Marleen , for this Super card.

That was a great way to start an update.

Now for a more modern up to date aviation related card. This one commemorates China Airlines launch of a new route between Taipei, Osaka and New York on April 28, 2011. We can see a China Airlines B747 flying above one of its pretty flight attendants and Lady Liberty. 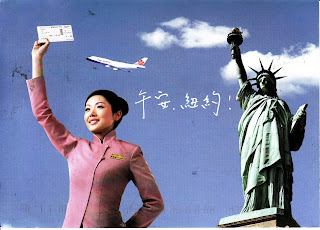 Yanshin used quite an array of stamps on this one. On the far left is a 1988 60th Anniversary of China Broadcasting Corp stamp. Next to it is a 1987 Speedpost stamp. The middle stamp is from 1981 and commemorates the 1981 Rocpex Taipei, an International Philatelic Exhibition. The top right stamp commemorates the 90th anniversary of the National Postal Service. Of special interest to me on this stamp is a Boeing 747SP. The bottom right stamp was issued in 1976 and commemorates 80 years of Postal service. Wow, that's a lot of stamp.

My next 3 cards are all from regular contributors of postcards, guys who seem to get around a lot. The first card is of Candi Prambanan in Indonesia, a UNESCO World Heritage Site. 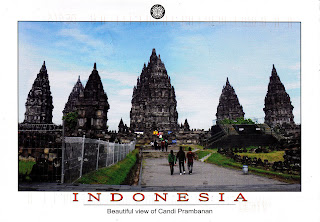 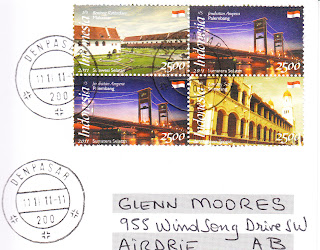 The next card comes from South Africa and is compliments of Bruce. It gives us a look at Table Mountain, Cape Town. It shows a rare electric storm over the mountain which took place on the 10th March 1995. 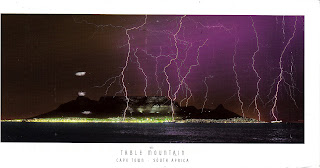 Bruce a Rhino stamp from 2010. It is from the set of 5 Big Five animals of South Africa. 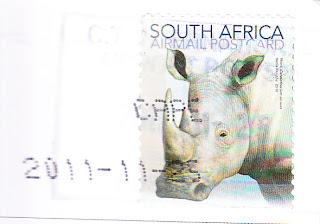 The Big Five are Lion, Leopard, Elephant, Buffalo and Rhino.

Now the last card for today. It is compliments of David and he sent it from Bournemouth, England. It looks like a great beach area and resort. A great place to spend a few days I think.

It is one of the country's leading resorts where visitors are attracted by its safe, sandy beaches. David used a 2011 Machin definitive along with one of the six new Crown Jewels stamps. 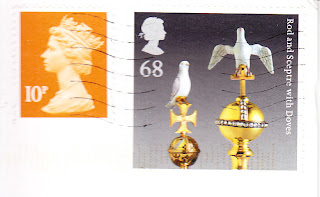 So there you have it, another in the books. Thanks go to Marleen, Yanshin, Jean Pierre, Bruce and David. Great cards from all.

Take care and as always comments, good or bad , are welcome.
Posted by Gem from Airdrie at 3:20 PM

Mail has its odd ways sometimes...but it is all well when it ends well ;)

those Indonesian stamps look lovely!! Doesnt surprise me they come from JP :)