In the Time of Covid

It's time for another installment of GemsWorldPostcards and here it is.

This time around all the cards are compliments of one sender -- Jean Pierre. The cards are from Italy, Latvia , Lithuania and Romania. So let's get to it.

First up is Italy. The card shows a number of sites around Taormina, a hilltop town on the east coast of Sicily, near Mount Etna. In the lower left is the Greek Roman Theatre which is still in use today. 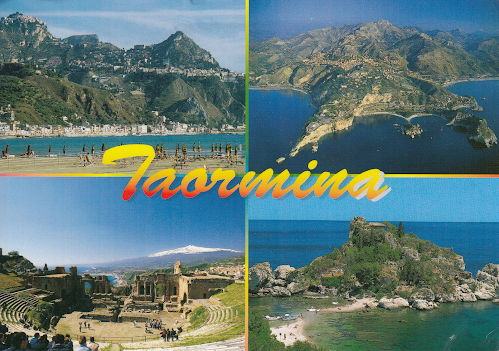 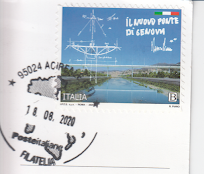 The next two cards are from Riga. The first one is the latest addition to my Aircraft / Airlines Collection. It shows YL-AAU,  an Air Baltic Airbus A220. This aircraft is quite new, it was delivered to Air Baltic in December of 2019, after being built in Montreal.   The A220 fits the 100 - 150 seat market. They are designed to give the feel of a wide-body jetliner in a single-body aircraft. 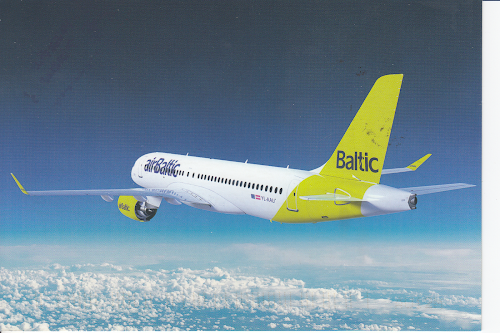 The reverse side of the card in addition to the stamps shows a partial system map of Air Baltic flights. Direct flights from Riga, Tallin and Vilnius are shown. The stamps are 2 Flower definitives f4rom 2014 and 2019. The larger stamp on the left was issued for Magnetic Latvia. That's the sum of what I know of this stamp. 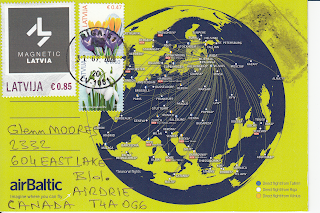 The next card is a look at two quite old buildings in Riga. On the left is St Peter's Church, an Evangelical Lutheran Church. Earliest records of the church indicate it was around in 1209.  The building on the right is the House of Blackheads. It was erected during the early part of the 14th century in 1334. It was built as a venue for meetings and banquets held by Riga's various public organizations. 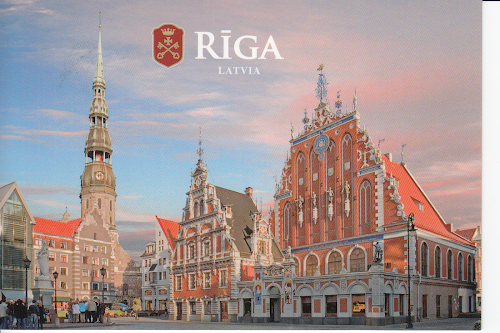 This card's stamp was issued in 2019 and Commemorates the 250th Anniversary of the Birth of Garlieb Merkel.

From looking at my next card, it's obvious there is a lot to see in Kaunas. This city in south central Lithuania is located at the confluence of the Neris and Nemunas rivers. From top to bottom the card shows the following : Kaunas Castle, the historical Presidential Palace, a Kaunas Old Town street, the Pazaislis Church of Visitation of Our Lady and the Monastery, a monument to those who died for for Lithuanian independence, The House of Thunder, St Michael's  Archangel's Church, The Kaunas Zaliakalis Funicular, and the Vytautas Church- the church of Taking Holy Virgin Mary into Heaven. So if planning a visit, be sure to give yourself enough time in this town. 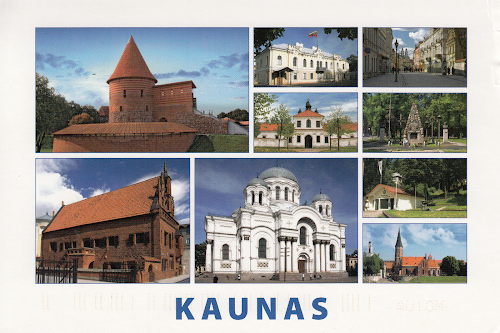 Two stamps were used on this one. On the left is 1 of 3 showcasing Historic Banknotes. On the right, from this year is a Bird stamp- this one shows Owls.

Just two more cards to go and both are from Romania. This first one shows Old Princely Court in Bucharest in the southern part of the country. It was built as a palace or residence during the rule of Vlad the Impaler Dracula in 1459. Vlad ruled Wallachia and you can see a statue of him on the card to the right. He's on that white pedestal. 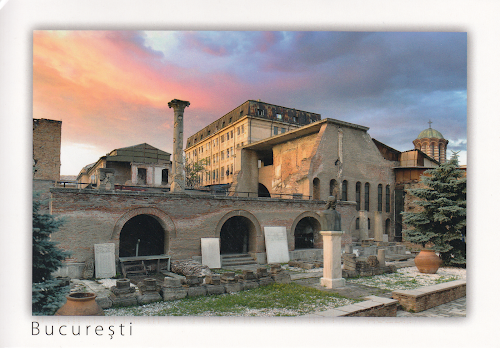 Jean Pierre used 3 recent stamps here. On the left, from 2018, is 1 of 2 Easter stamps for that year. The middle stamp , from 2019, is 1 of 9 different stamps in a sheet highlighting The Constitution of Romania - Guarantor of the Romanian Citizens' Rights.   The far right stamp was issued in 2015 to mark the Solemn Year of the Parish and Monastery Mission.

Here we go , the last card of the day. It's a look at a couple of the tall buildings in Bucharest , in evening light. 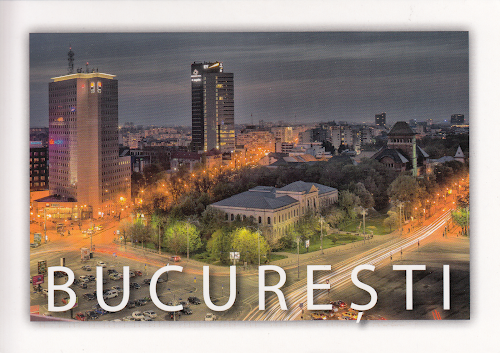 There are at least 2 stamps on this card and maybe three. On the left and the right are stamps from 2013 and 2020. The left one is the Christmas stamp of that year. The large stamp on the right is 1 of 4 in a set issued for Romanian Day of the Stamp. The stamps show the uniforms of the Romanian Royalty. The king on the stamp is Carol 1. Oh yes, the center "stamp" . I don't know what it is, I don't think it's a stamp. It could be some kind of postal label or selvage from a sheet of stamps. Any thoughts or comments or prediction as to what it is ? Enquiring minds want to know ! 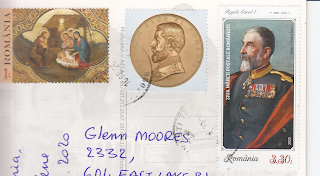 That's all I have for today. Big thanks going out to Jean Pierre for all the cards and great stamps.

Take care all , stay safe , wear your mask and keep your distance.

Posted by Gem from Airdrie at 6:22 PM