More Than Seven Years Ago Today

Hello readers, here I am with an update again today. It's been over 7 years now that I have been blogging here on Gem's World Postcards . I first went live here on Nov 13, 2007 and today's update is # 609. That's cause to celebrate, I think. I certainly never dreamed  way back then that I'd still be doing this in 2014 and looking ahead to 2015. But there it is. It's all good.

But I could never have reached this far without a lot of support. I have to thank All who have sent me so many postcards over the years. You know who you are, so take a bow. Thanks to my readers and to all who have left comments , I love reading them. I hope everyone can still join me here and help me get to at least 10 years. That doesn't seem that far away now.
Once again I say, "Thanks everyone ".

Now it's back to cards. Today's entries come from Australia, France, U.S.A., another from France, Serbia and Switzerland. Let's start with the card from Switzerland. On this first card we can see a couple of views of Schwyz, Switzerland.   The town of Schwyz is the capital of the canton of Schwyz in Switzerland. The Federal Charter of 1291 or Bundesbrief, the charter that eventually led to the foundation of Switzerland, can be seen at the Bundesbriefmuseum, it is currently exhibited at the archives of the Swiss Charters of Confederation in Schwyz. Also on the card is the Catholic Parish Church of St. Martin. 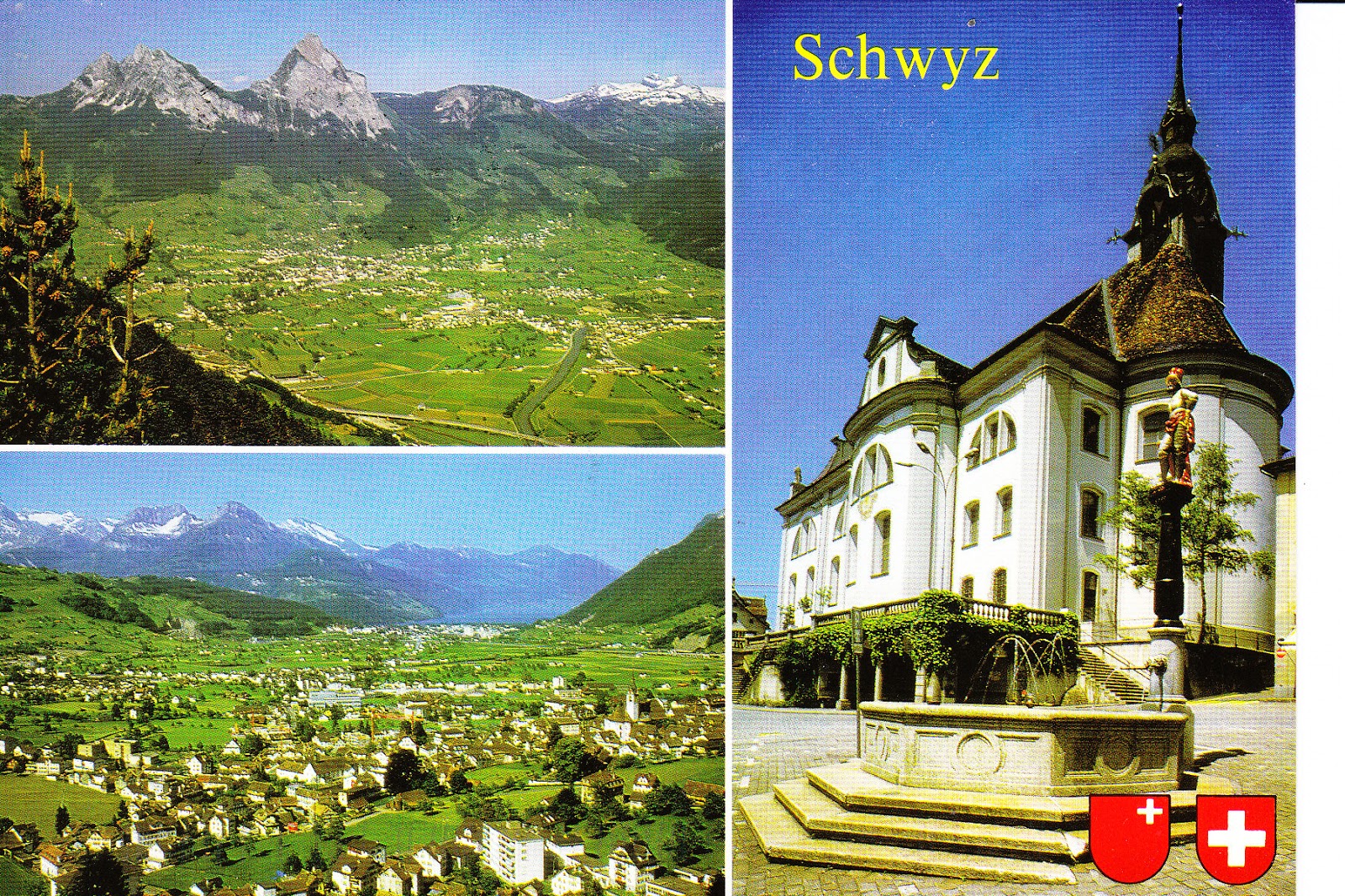 Next up is a card from Belgrade, Serbia, the capital and largest city of Serbia. It is located at the confluence of the Sava and Danube rivers. A number of old buildings and towers are shown on Ana's card, with the Old Palace , housing the City Assembly of Belgrade in the lower right. 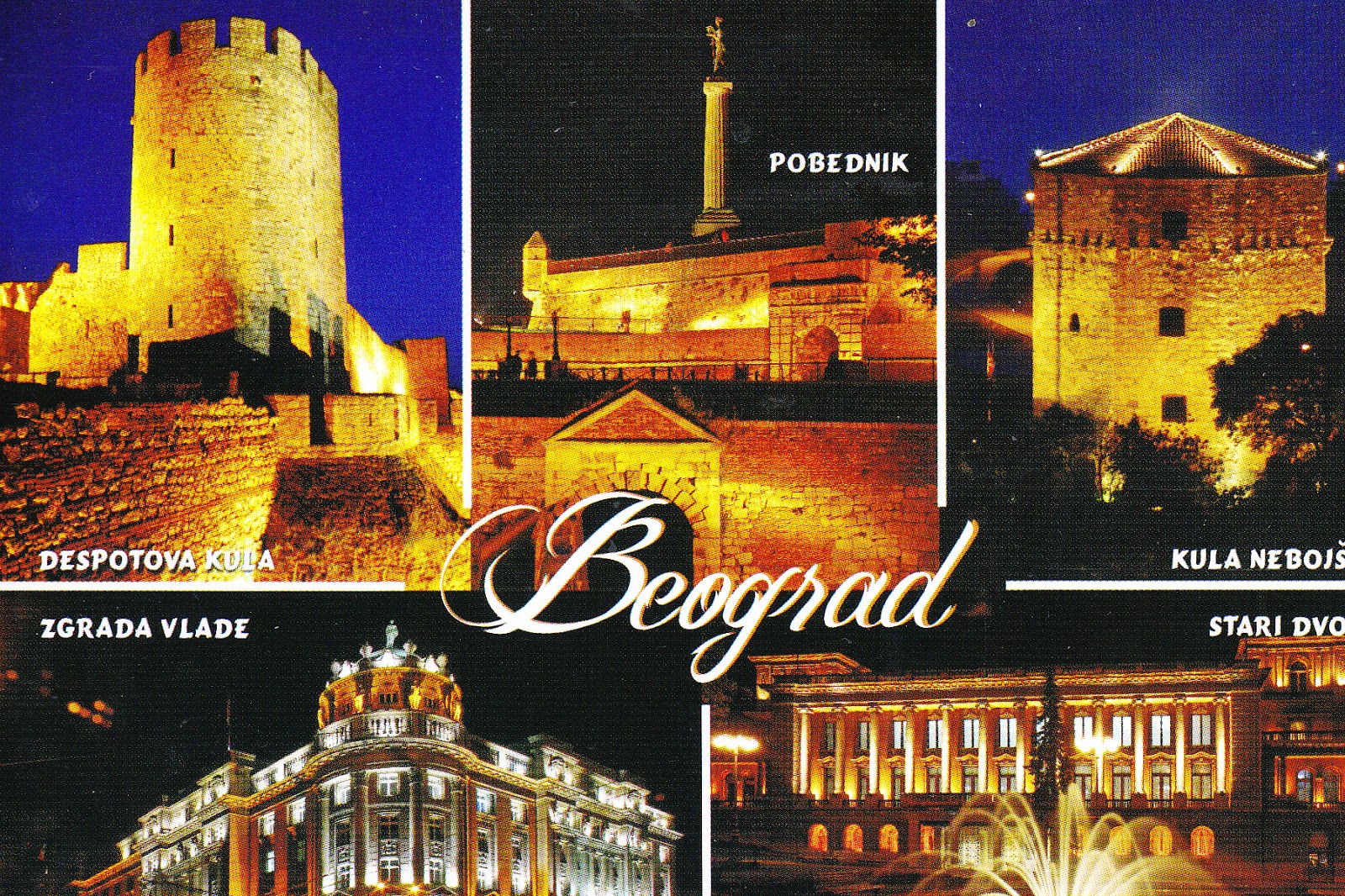 Ana used a stamp from a really nice set of 4 Cats and Foxes ( Predators ) issued this year. Between stamps 2 and 3 was a Tab, which could easily be confused for a stamp. 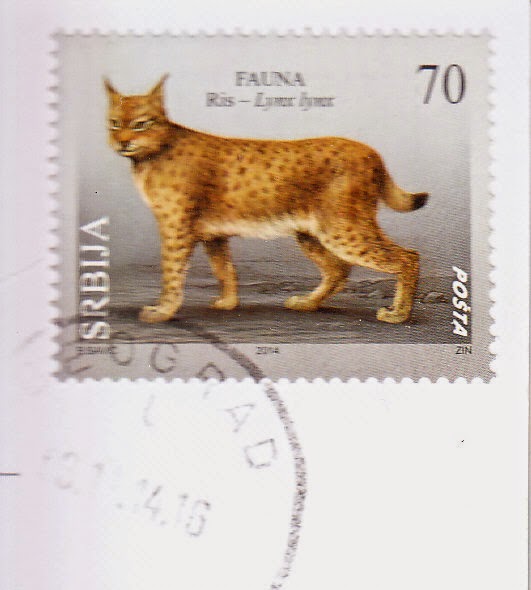 Don't forget to check out Ana's great postcard blog called "My World of Postcards ". You can find it right here .

The Paris Opera is the subject of my next card which arrived from Paris. It is the primary opera company of France. It was founded in 1669 by Louis XIV. 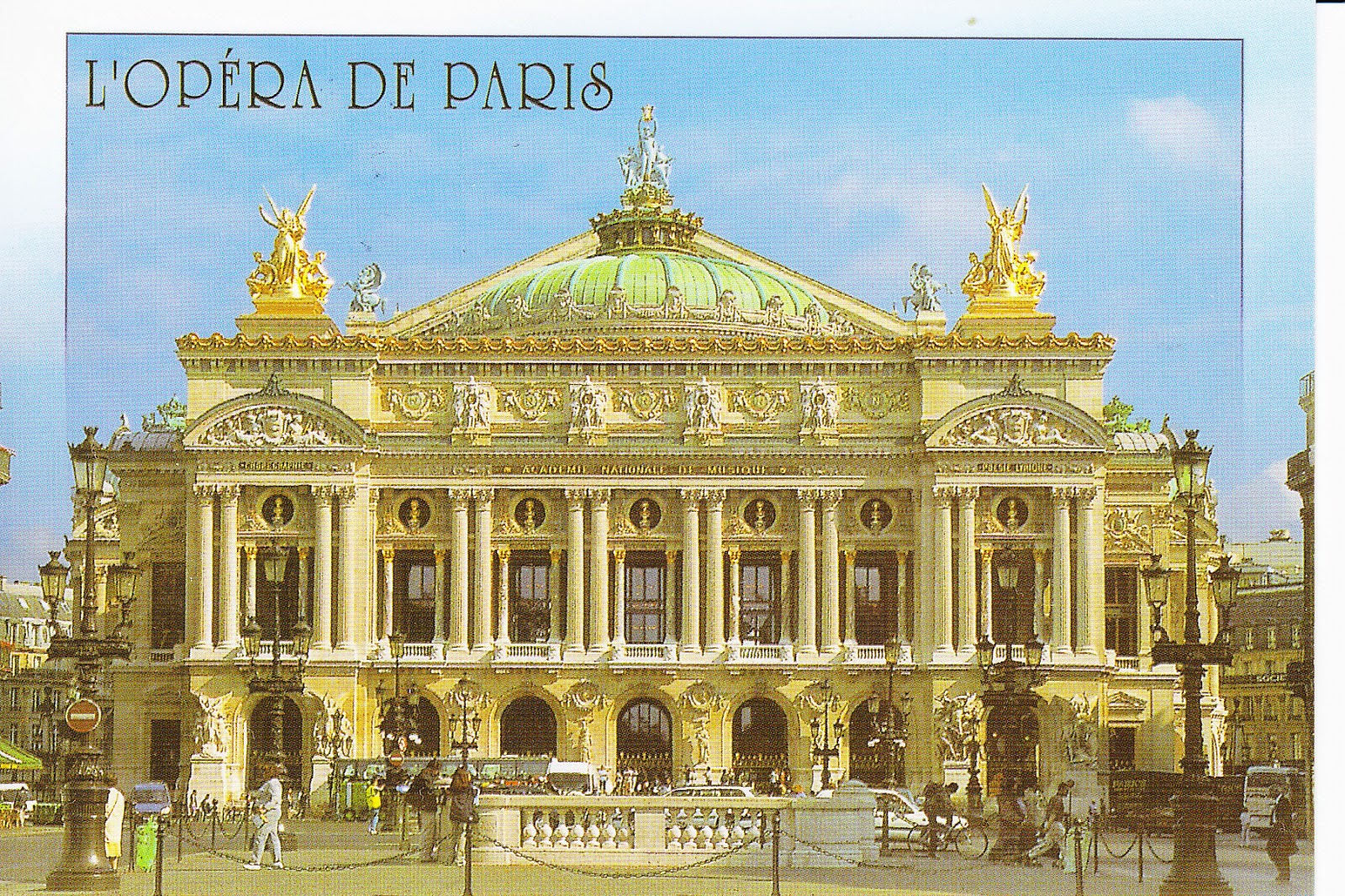 This is a card from Johan. He used a stamp from a set of 12 celebrating the New Industrial France. Johan was able to secure a First Day of Issue Cancellation on this one, with a special and unique cancel from Paris on 24-10-14. 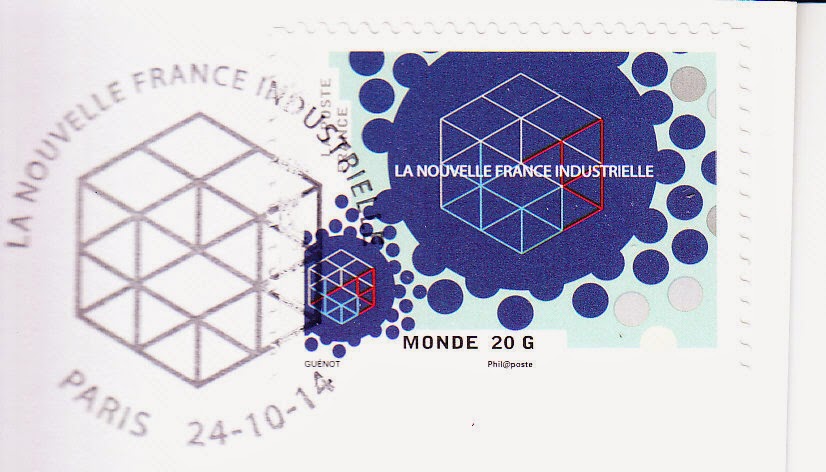 Be sure to give Johan's postcard blog a look here.

Now for a Lighthouse card from the U.S.A. These are lighthouse of Casco Bay in Maine. Casco Bay  is an inlet of the Gulf of Maine on the southern coast of Maine U.S.A. The city of Portland sits along its southern edge . A number of lighthouses including Portland Head Light are seen on the card. Absent from Lynne's card is Pocahontas Light at Echo Point, the smallest lighthouse registered with the U.S. Coast Guard , standing at just 6 feet. 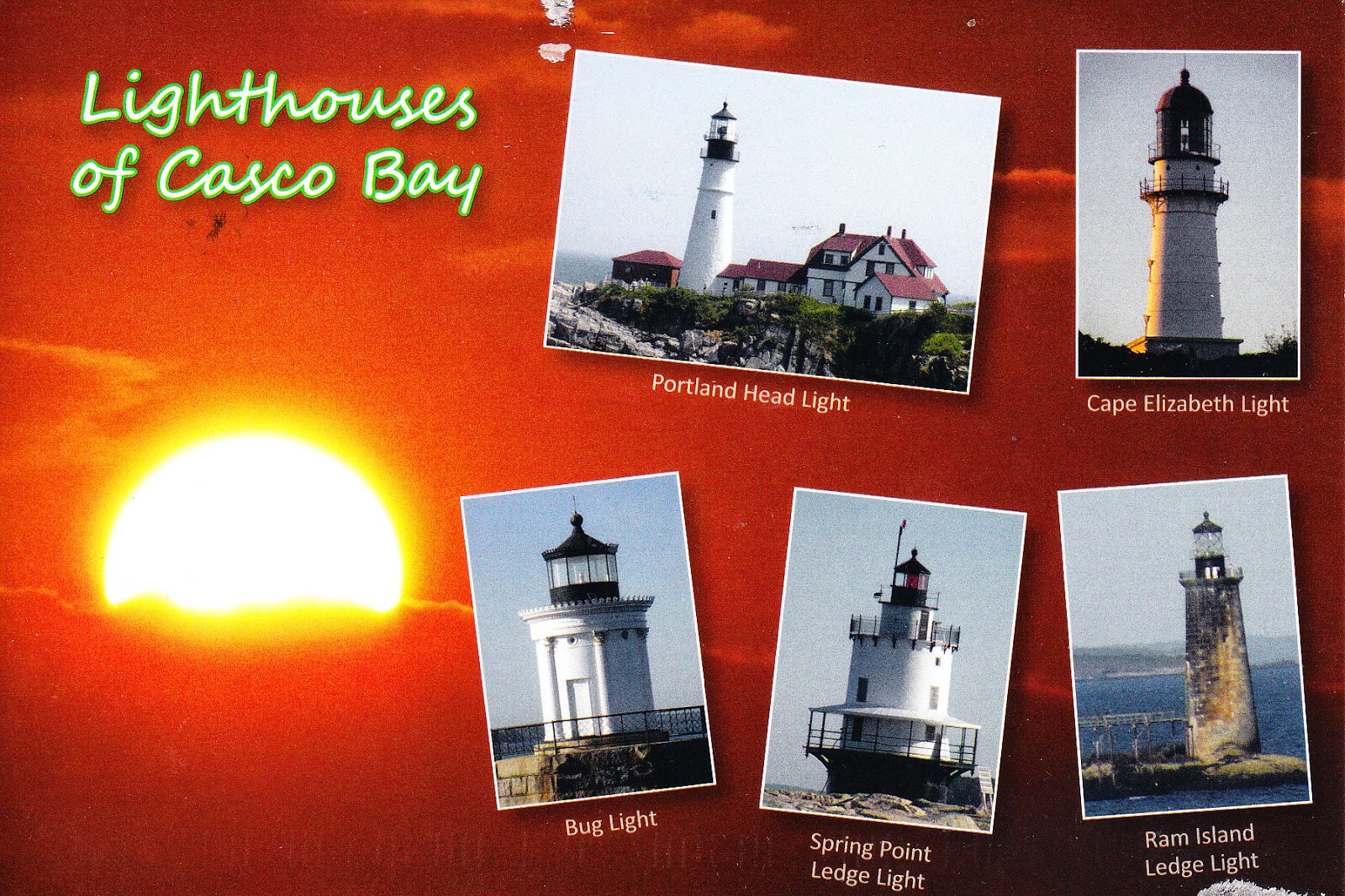 Here's a card from Lille, France.Lille is a city in the North of France. It is the principal city of the Lille Métropole, the fourth-largest metropolitan area in France after those of Paris, Lyon and Marseille. Lille is situated in French Flanders, near France's border with Belgium. Lille is an important crossroads in the European high-speed rail network. It lies on the Eurostar line to London (1:20 hour journey). The French TGV network also puts it only 1 hour from Paris, 35 minutes from Brussels and other major centres in France such as Marseille, Lyon, and Toulouse further away.  Lille has many famous citizens past and present including Louis Pasteur and Charles de Gaulle.  Dominique's card shows a typical restaurant or cafe called Estaminet where one might order chicken with French cheese and French fries. 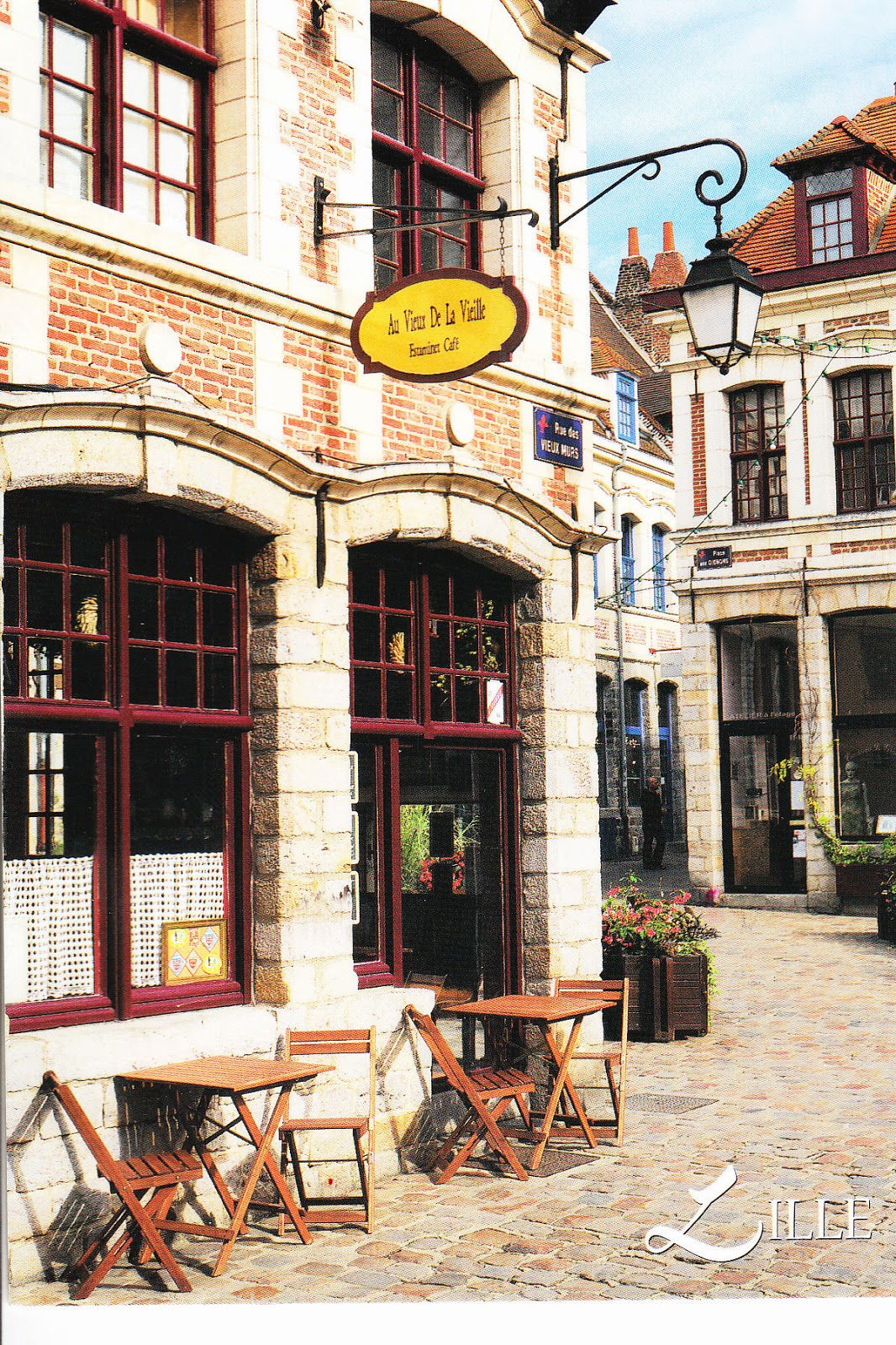 France issued a beautiful Souvenir Sheet of European Capitals ( in this case Vienna ) , this year,  and this is one of the stamps in that sheet. Certainly a sheet that would look good in my collection. 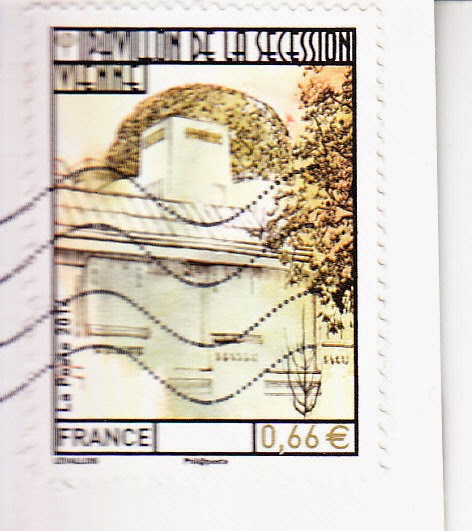 Today's final card comes from Down Under, Sydney, Australia. A place I hope to check out in March. Giraffes in front of the Sydney Opera House. Not sure I'll see that though. The Taronga Zoo is the city zoo of Sydney, New South Wales, Australia and is located on the shores of Sydney Harbour in the suburb of Mosman. It was officially opened on 7 October 1916. The Zoo is home to over 2,600 animals of 340 species . 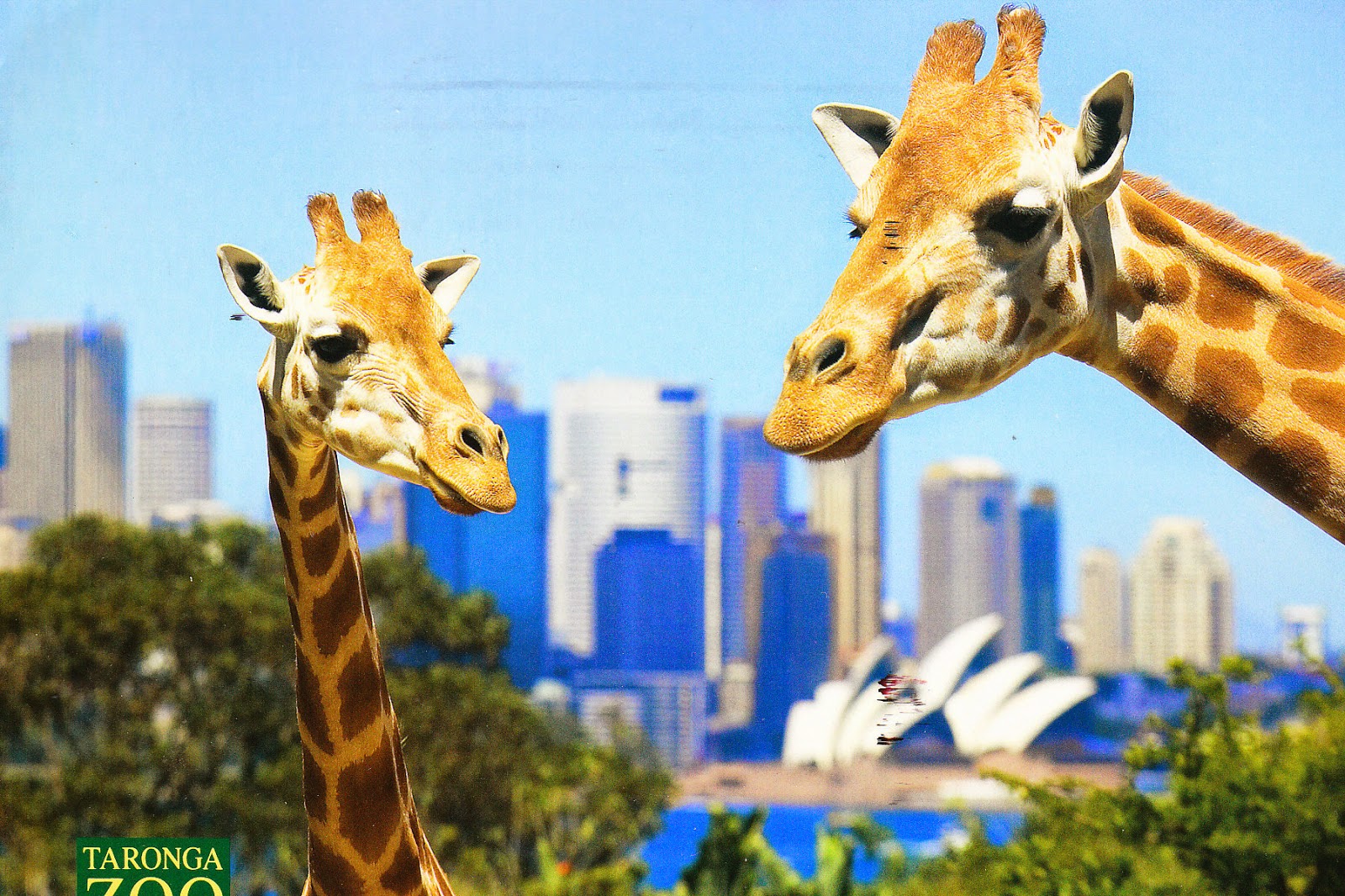 Postcrosser Lady Demelza used 1 of 3 stamps in a 2014 National Parks Issue. This one highlights Alpine National Park in Victoria. Another nice set of stamps. 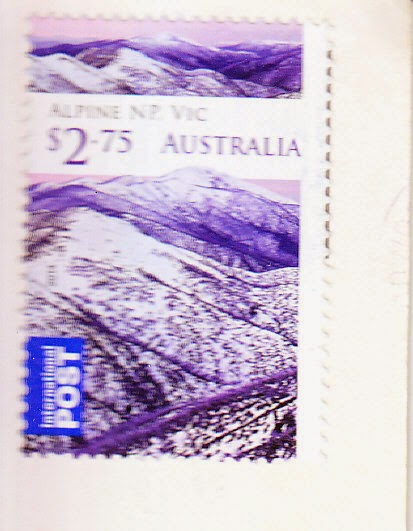 So ends update # 609. Another good one. Thanks for the cards going out to Zdenka, Ana, Johan, Lynne, Dominique and Lady Demelza. If  you have any comment about this update, be sure to leave it. Take care and see you next time. I have a little something special to show you next time. Cheers .

Posted by Gem from Airdrie at 4:24 PM